By Mimsie Ladner on Sunday, September 20, 2009
[Note: The blogs about my trip to Thailand are not in the usual blog-type style. My entries are merely to document the events of my travels there, rather than focus on one specific aspect of the country or its people. These writings are more for me than anyone, so I apologize in advance for the lengthiness.]
As the H1N1 paranoia continues, my place of employment has continuously lost business and has forced us teachers to endure endless amounts of programming, creating potential new classes such as: survival class, suburban living class, and birthday party class, to name a few. In addition to being enslaved in the computer lab compiling ESL lessons, we were also asked to use a week of our mandatory vacation time.
So, I booked a ticket to Thailand and before I knew it, I was on the Seoul subway en route to Incheon International Airport. Considering I had about two hours of sleep, I was quite lethargic and a bit delusional. I woke up just as the plane was landing to the sound of the pilot welcoming the passengers to Hong Kong. Huh? My flight itinerary was booked by a Korean co-worker, and thus was in Korean, so I had no idea I had a stopover. After figuring this out, I had some Chinese tea in the Hong Kong airport and re-boarded the plane. Thai Airlines has been one of my favorite companies to fly with. The seats are upholstered in fuchsias, magentas, and purples (my favorite color scheme) and the charming flight attendants are adorned in semi-traditional silk Thai apparel. Upon entering the aircraft, passengers are welcomed with “Sawasadee,” and given a respectful wai. A wai is the traditional Thai greeting in which the “sender” slightly bows with his or her palms pressed together in a prayer-like fashion held just below the chin. There are various types of wais, depending on the social status of both the “sender” and “receiver”. I picked this up very quickly, as I found it not only proper Thai etiquette, but also lots of fun to do. As much as I hate to admit it, “Sawasadee” was the only Thai I used throughout my trip. I suppose it was because I was completely and utterly enamored by the fact that almost everyone around me could speak English, something I hadn’t experienced in five months. 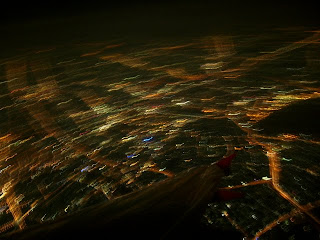 Flying over Bangkok at night.
After my connecting flight in Bangkok was delayed, I arrived in Chiang Mai a bit later than expected. I peered out my window through the darkness as the plane descended and was surprised to see something I also had not witnessed in a long time: houses. This sounds odd, but I was quite excited to see one and two story homes, with lawns and driveways and even swimming pools. I was glad that I had only brought a carry-on, as I hopped off the plane and was met by my driver provided to me by my hotel, The Castle, in a matter of a few minutes. On the way to the hotel, I also noticed that unlike Seoul, the city is spread out horizontally rather than vertically. The third thing that caught my eye were the motorbikes.

While I have become used to motorcyclists using the sidewalks in Korea as an extra lane, nothing could have prepared me for what I witnessed in Thailand. There are motorcycles EVERYWHERE and are undeniably the main mode of transportation. But that’s not all. Families of four squeeze together on a single motorbike. It is rare that anyone wears a helmet on motorbikes (I later learned that there are helmet laws but they are rarely enforced by the Thai police). Some children begin driving motorbikes at the age of 8, though that’s illegal, too. I even saw a man holding an infant in one arm and the handlebars in the other. I am not even making this stuff up. Motorbikes are a way of life in Thailand and I regret not capturing this phenomenon in pictures, but I found that I would nervously look away when I saw such sights. 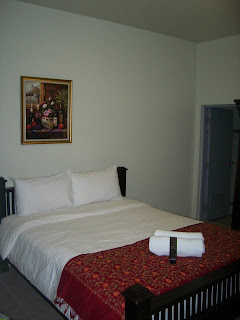 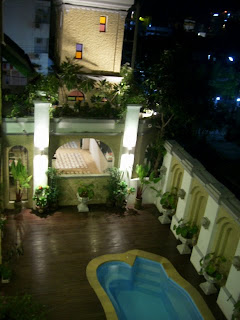 Boutique hotels, the latest trend in tourist accomidations, features nice rooms and a variety of ammenities, like this great pool and included breakfast for a whopping $25/night.

I arrived at my boutique hotel to be welcomed by the extremely hospitable owner, Pearl. I walked past the pool and patio area up to my room where I was overwhelmed with joy upon seeing my queen-sized bed, down comforter, and fluffy pillows, a luxury in itself. My room had a private bath with a hot shower and also had a nice private balcony. The TV also had a number of English channels, including MTV. It was definitely worth paying the midrange $25/night rather than going budget at a hostel. My friend Rachel who I met in Korea was also traveling in Thailand and stopped by my hotel so we could catch up. After she left, I immediately passed out and enjoyed one of the best night’s sleep I’d had in a long time, despite the gnawing anticipation for the next day… and the caged barking dogs just outside my window.