[Note: The blogs about my trip to Vietnam are not in the usual blog-type style. My entries are merely to document the events of my travels there, rather than focus on one specific aspect of the country or its people. These writings are more for me than anyone, so I apologize in advance for the lengthiness.]

Saemi had a tutoring job in the morning, so I slept in a bit. I took a shower and went to wish her parents a good morning; to my surprise, eoma had cut up some fresh tropical fruit for me and motioned for me to join she and her husband in front of the TV. We began to watch some Korean television program, which gave us a multitude of topics to talk/motion about, including Big Bang (the boy band, not the scientific theory) and bulgogi. It still amazes me how little language is necessary for communication.

When Saemi returned, we headed out to book a spot on the afternoon city tour at Sinh Café, a tour company that almost every traveler in Vietnam has heard of. We had a couple hours before it began, so we decided to grab a bite of seafood fried rice and spring rolls at the nearby Kim’s Café before taking a walk around the ‘hood. Soon, we found ourselves nestled in a comfy booth at Highland’s Café, Vietnam’s answer to Starbucks. (For the record, there are NO Starbucks in Vietnam- a first of the 20 or so countries I’ve visited.) Soon enough, it was time for our tour to begin.

The first stop was the War Remnants Museum. War air crafts welcomed our tour in a sobering military fashion as we approached the entrance and in the lobby, a column was plastered with peace-themed posters drawn by children. Nearby sat display cases of artillery shells, gas masks, and weaponry used in the “American War” as it is known to the Vietnamese. I was astonished to see the vast imagery that hung on the walls. Not only was the collection of images huge, but what shocked me most was the horrific nature of the photos. They say that the extensive media coverage and appalling images actually ended the war, as disheartened Americans protested and demanded that the the most pointless war in our history be stopped. 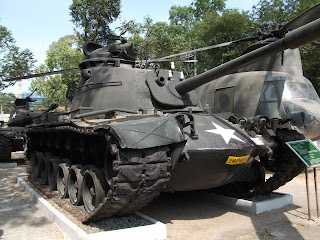 A tank greets visitors to the War Remnants Museum.

There were photos of smiling American soldiers holding up the skins of the Vietcong they had captured. Children running through the streets naked being burned alive by napalm bombs. There was even a photo of young women and their children grasping on to each other with sheer panic in their eyes. The photographer noted that as he took their pictures and walked away, the American soldiers shot them all dead. Innocent women were disemboweled while their watching children were left purposefully to fend for themselves; all the while infants were thrown in wells to drown. And what’s worse is that this war was only forty years ago… so much for being a society of civilized people. I know that the other side had its own war tactics as well, but still… it made me sick to my stomach to be a citizen of the nation that inflicted so much pain and instigated such tragedy upon these people on their own soil. But, I supposed I shouldn’t use the past tense when talking about such things.

The most moving part of the museum was an area on the first floor, exhibiting the effects of the chemical warfare on the people then and now. Agent Orange, a cocktail of herbicides, was the most famous of chemicals used by the Americans during the war. Distributing these chemicals with crop dusters, the military had hoped to burn off the canopy of the jungles so that the Vietcong could no longer hide. Perhaps it worked in the short term, but such warfare left devastating effects on the environment, and more importantly the people. Both Vietnamese soldiers and civilians alike that came into contact with the substances have since developed an array of diseases. Even today, the offspring of these people are born with genetic defects, leading to mental and physical disabilities. The exhibit showcased actual fetuses that were extremely deformed and the alien-like images of both children and adults were enough to make the viewer cry. [Just watch this short video clip of 3rd generation Agent Orange victims and you will want to cry, too.] Still today, areas in which the chemicals were stored pose health threats to its inhabitants. Furthermore, there are also people continuously injured or killed in Cambodia by landmines leftover from the war. It was quite surreal to exit the museum and see an amputee asking for money. I noticed many more throughout the duration of my trip and each time I did, I couldn’t help but feel a bit shameful. 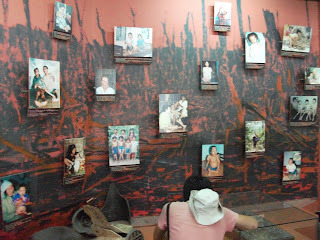 A wall of images of those affected by Agent Orange and other herbicides used during the war.

Our next stop was the Reunification Palace, the former residence of the president of South Vietnam. When Ho Chi Minh and the communists of the North finally made it to Saigon after the Americans pulled out of the war, the president quickly surrendered. It still remains today as it did then. The place was bedecked in 70s décor- think Brady Bunch meets Asia. I felt that it seemed like a pretty humble residence for a president, but did find the basement pretty cool. Straight out of a war movie, old telephones sat on metal desks in ‘secret’ offices, seemingly untouched by the years. We finally made it out the eerie concrete walls of the bomb shelter and hopped on the bus to our final stop.

Saemi and I took a look around the Notre Dame cathedral and the Municipal Post Office and I couldn’t help but to be a bit confused. One minute, old women in conical hats were pedaling by on their bicycles selling their fares and the next I was staring at the façade of an undeniably French church. Both structures were quite stunning, but it’s hard to ignore the lasting effects of the colonialism that has shaped Vietnam into the multifaceted nation it is today. 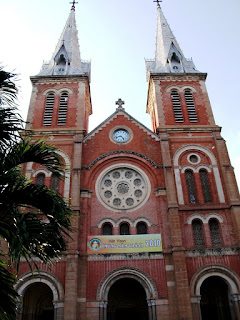 France or Vietnam? The Notre Dame cathedral sits beautifully in the middle of Saigon. 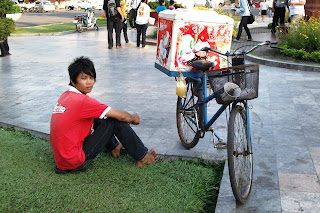 Turn your back to see scenes like this, a vendor selling ice cream from his bike. He had the ice cream music and all!

Our tour guide dropped us off, per our request, at the Ben Thanh market where I racked up on a Chanel wallet and a pair of Ray Ban’s for under $10, after negotiating the price by almost 80%. I also picked up a Lonely Planet- India guidebook that I had seen in Seoul for $40 that I snagged for $6. Yes, I do love the ignorance of copyrights in Asia, but especially in Vietnam. We took a walk around the block and in the thirty minutes it took for the sun to go down, we watched an entire night market go up. We plopped ourselves down at one of the open-air restaurants made up of a tent and folding chairs. They even rolled in portable seafood tanks. I inhaled my soft shell crabs and soon we found ourselves wandering again. 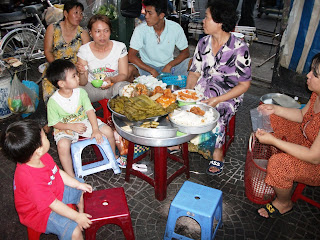 A family gathers on mini plastic stools to enjoy dinner just outside the Ben Thanh market.

We were lured into the 23rd of September Park by the sound of Vietnamese music and dancing teenagers. It was fun people watching and we got a laugh out of the fact that this was the make-out spot for young people. Instead of convertibles and beach views, however, there were couples hoisted on motorbikes, ostensibly unaware of the hundreds of passerbys. We ended up being approached by a young Vietnamese guy, Hien, and his posse of university friends eager to practice their English and meet foreigners.

After what I had seen that day, and still a bit somber, I was hesitant to say that I was from America. Still, I did, and I was welcomed to Vietnam with an enthusiasm I rarely witness. They were such friendly people and Hien agreed to e-mail Saemi with directions how to remove the Vietnamese-imposed block of Facebook (oh, communism) on her computer. Sure enough, he did. In fact, we all became Facebook friends, and I’m pretty sure it made Hien’s day when I wished him a happy birthday recently.

Someone once told me that there is a belief- maybe Buddhist?- that when you meet a person, even if only for a short amount of time, then you had some strong, important relationship with that person in the past. In the current life, circumstances conspired to bring your spirits together again. I don’t believe in reincarnation, but if this is true, then I am proud to have been associated with such hospitable, kind-hearted people in the past and hope that one day, maybe in a future life, to cross paths with them once again.

*If you would like to donate money toward removing landmines in Cambodia, Samaritan’s Purse is a legitimate (and close to my heart) organization to do so.