In middle school, I used to dream of being a pop star, as I am sure many girls of that age do. I even formed a singing group with two friends (coincidentally named 2AM) and demanded regular rehearsals for non-existent gigs. Despite my lack of actual talent, I used to pray for a chance to get to perform on stage in front of thousands of screaming fans. Ten years later, those prayers were unexpectedly answered.

Last week, a Facebook friend/employee of the Korean Tourism Organization posted a status saying that she was looking for foreigners interested in sharing a stage with K-Pop idols. It didn’t say much other than that, but I figured it wouldn’t hurt to inquire. As it turned out, applicants would be performing the opening dance number at the 2011 Dream Concert. Once she called to confirm that I was still interested, I hesitated taking the opportunity, seeing as I have two left feet and all. But, after thinking it through, I figured it would be absurd of me to pass up this once-in-a-lifetime chance of being a part of something so big, even if I made a fool of myself. So, as per her request, I quickly learned the overly adorable, Native American-inspired “Ya Ya Ya” by T-ara, filmed myself doing the dance in my super small apartment and sent it in my “audition video” with fingers crossed. I was surprised to hear the next day that I was accepted, though I think my approval had less to do with my dance skills and more to do with my non-Asian face.

The song we would be performing to was a compilation of snippets from some of the hottest K-pop groups: DBSK’s “Why (Keep Your Head Down)”, 4Minute’s “Mirror Mirror”, 2PM’s “Without You”, Kara’s “Lupang”, and last but not least the classic “Sorry, Sorry” by Super Junior. I busted my out-of-shape butt imitating the moves I watched on the fan-made tutorial videos on YouTube. I was actually having a lot of fun with it, but I worried that I was learning the wrong parts, as I was unable to attend the rehearsals during the week due to work. 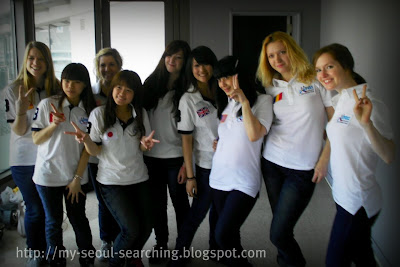 Friday came quickly and I headed out for my first group rehearsal at World Cup Stadium in Western Seoul. I met the other dancers while we waited for the Visit Korea Year representatives to arrive. The whole purpose of our doing the cover dance for the concert, which is to be televised in 10 countries, was to show the global interest in K-Pop culture. So, I wasn’t surprised to meet people of so many different nationalities. Most of the dancers were in their 20s and were students studying Korean, but there were a couple other English teachers, too. It seemed that a lot of the students knew each other and I found it so cool to see Chinese, Japanese, British, Romanian, German, Singaporean, and Americans conversing with one another in Korean.

We then headed up to the practice room to go over the dance a few times. Shortly there after, we were brought up to the stage. As we entered the field, we started noticing some of the faces around us. A lot of the group, myself included, quickly reverted to giggling schoolgirls as we crossed paths with Beast and U-Kiss. After being given our costumes, we all headed home for a rest before the big day. 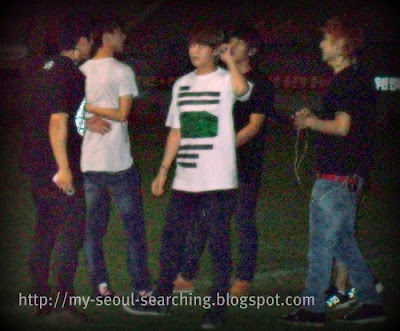 Suzanne, a fellow dancer, was brave enough to sneak a picture of Beast. Yes, we were this close!

Saturday morning was absolutely beautiful. I woke up feeling energized and ready for the concert. As soon as I arrived at World Cup Stadium station, at 8:00 AM, mind you, fangirls (mostly highschoolers) were already pushing their way out of the subway toward the exit. While the concert didn’t start until 6:30, many of them were hoping to get a good spot in line or the chance to spot one of their K-pop crushes. 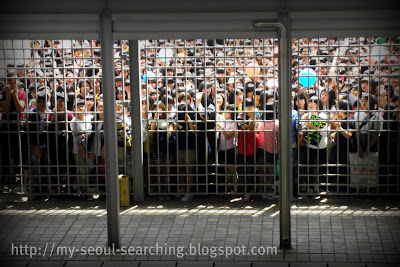 Fangirls waiting impatiently in the early afternoon to get their seats. Soon after, we saw police officers maneuver themselves to make a man-made barricade to keep the girls in place.

The excitement was tangible as we began our practice in one of the stadium’s skyboxes. While we went over the dance moves and new formations (things were changed right up to minutes before we went on stage) we watched acts like Miss A and Shinee do their sound checks. What we were about to do was all becoming very real now. Before our last stage rehearsal, we were brought down into the stadium and were able to watch U-Kiss, DBSK, FT Island, K-Will, and 2PM (!!!!) rehearse. Seeing as we were the only ones watching them, we cheered them on from the front rows. I was a happy girl to say the least to be rubbing elbows with the entertainers I’ve come to adore since my arrival here in Korea. I couldn’t believe how beautiful (albeit plastic) they all were in person. We exchanged “annyeong haseos” and “hey guys” but unfortunately there wasn’t ever enough time for photo ops. 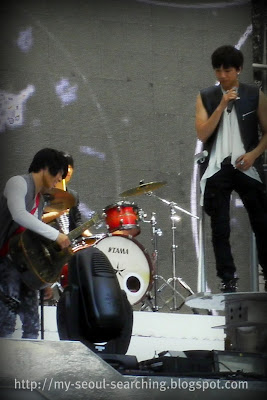 We were able to watch FT Island doing their rehearsal from the front rows… they were amazing! 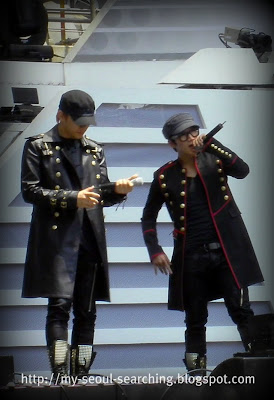 Even though it was only a sound check, 2PM still rocked it out! We figured out the glasses and hats were to help disguise them before the show.

In addition to their looks, they are also amazing performers. It’s a really big deal to be a popstar in Korea, as it usually involves recruitment by one of the big music empires in middle school with at least 5 years of training. If one is lucky enough to be put into a group after those years, they will no doubt do well at least for a little while, as fans in Asia are hardcore. Korea itself is a small country but it is the entertainment capital of Asia and Korean groups have fanbases from Japan to Thailand and everywhere in between. (Even those famous Filipino prisoners did a cover of Sorry Sorry.) So, when the time came for us to go on stage for the real deal, I felt so lucky to be doing what millions of people would no doubt kill for. 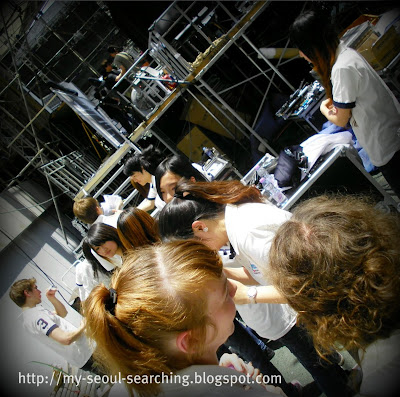 Our group waiting backstage for our afternoon rehearsal. 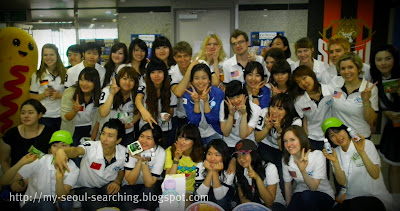 The group on snack break after rehearsal… along with the corndog man.
The crowd was going wild come 6:15 and as we lined up backstage I could felt my stomach trying to come up through my throat. I tried hard to ignore U-Kiss and 5 Dolls standing next to us as I went through the dance steps one last time. It kinda eased my nerves to see them going through their own dances, too. Who would’ve thought? They wished us luck as our big moment came.

We took positions on stage and I went down into a kneeling squat as intended. What seemed like 20 minutes later (but was probably only 3) I realized our music was not coming on and became a bit jittery as my calve muscles started to give out. With my head down, I glanced up into the audience of 25,000 screaming and chanting, “Shijak, Shijak!” (“Start! Start!”). We were told to leave the stage. WHAT?! We were all shaken up a bit but re-entered after a formal introduction. Finally, our music turned on and as we broke into “Keep Your Head Down” I looked up into the audience and felt the adrenaline hit my head. It was over much too quickly as Super Junior’s Kim Heechul, Kara’s Goo Hara, and actor Song Joong Ki, the 3 hosts, entered the stage. We walked off at the wrong time (oops), all jumped at the fireworks that shot off from the stage mid-dance, and I may have missed a count or two, but in the end, we were all super excited as we left the backstage area. 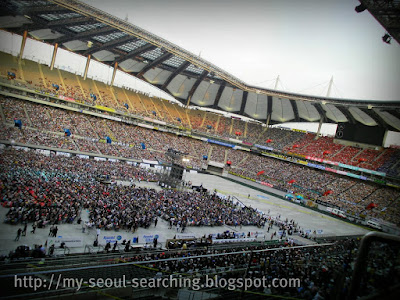 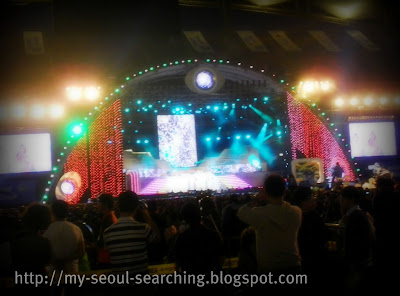 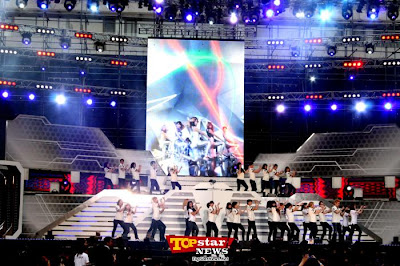 
Apparently the block of seats that had been reserved for us to watch the concert was taken over by other people but the guy heading the event was nice enough to find us seats on the floor. After a bit of musical chairs, we were finally able to watch the remainder of the show. It was so cool to look around and see the die hard fans segregated into groups based on who their favorite singers and groups were. They held different color balloons based on the band and held up signs to confirm their loyalty. It was all quite fascinating. All the acts performed well but I have to say Shinee was my favorite, followed by Beast and Afterschool (their tapdancing routine was too cute!). Not before long, however, the exhaustion that had been building up all week hit me hard and not wanting to deal with the overwhelming fangirl traffic on the subway, I headed out with a couple of the other dancers early. I was in bed by 11:30, K-popped out for the day. 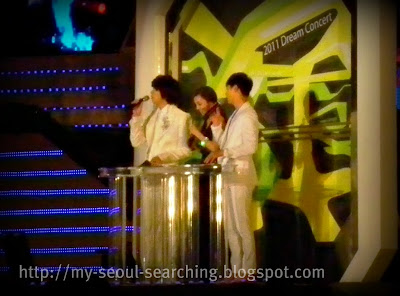 The MCs announced the acts as the night went on.

Overall, the Dream Concert day is no doubt at the top of my Korean experiences. The concert was awesome in itself, but meeting such cool people from all over the world was just as fun. Now that 2 of my 15 minutes of fame have passed, I wonder what the other 13 will entail. A movie spot with Lee Min Ho? An extra in a Hyun Bin drama? Only time will tell. Until then, I’m content with having lived out one of my childhood dreams, all the while experiencing the K-Pop phenomenon first hand. 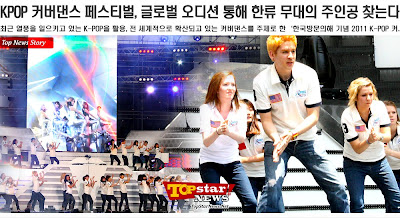 We were featured in lots of Korean media, including Top Star News! and in an article at the famous K-pop news site, AllKPop.com. Yes, that’s me making that awkward constipated face!
Watch a shortened version our performance here!!!
2
Previous Post
Next Post