Acupuncture for What Ails You

By Mimsie Ladner on Sunday, February 3, 2013
Earlier this month, I was struck with a stomach ailment that I originally thought was appendicitis.  After dropping about $500 in the emergency room at Seoul National University Hospital, I was told that all of my tests had returned normal.  After spending even more in their clinic on a return visit and some further tests to ensure I didn’t have cysts, my boss recommended that I try traditional Chinese medicine.  Somewhat skeptical but intrigued, I agreed to join her on a trip to Seomoon Oriental Medical Clinic to have a consultation with Dr. Jin-il Park.

Upon my arrival, I was a bit surprised by the office’s appearance.  Don’t get me wrong.  I wasn’t expecting some ancient, bearded Asian man with a pipe in hand turning needles over a fire in a dark, incense-filled room, but I hadn’t anticipated it to be so clinical like, either.  Dr. Park’s office was small but comfortable and very clean.  He had a kind demeanor and spoke enough English to discuss my medical problems. 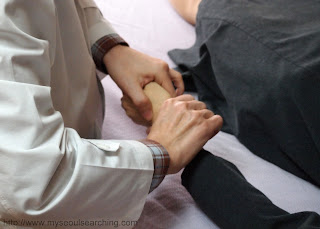 After I told him that I had been having strange pains in my abdomen for some time, he assessed the pulses in my arms and legs, the most important diagnostic technique in Chinese medicine.  After determining the pathogens and imbalances present in my body through my pulses, the doctor prepared instruments for my acupuncture session.

I don’t mind needles so much, but I was somewhat apprehensive about having a number of them in my body at one time.  To my surprise, however, this never happened during my session, as Dr. Park’s acupuncture method involves the use of a single pen-like device in which he lightly pokes the hair-thin, stainless steel needles into a variety of points along the body’s lines to relieve the obstructions of energy flow.  I barely felt the needles and I found it interesting that he used points in my elbow, thumb, big toe, and calf to fix a stomach problem, but he seemed to know what he was doing.  Plus, these techniques have been used for thousands of years, so who was I to argue?  The entire treatment took a total of about five minutes. 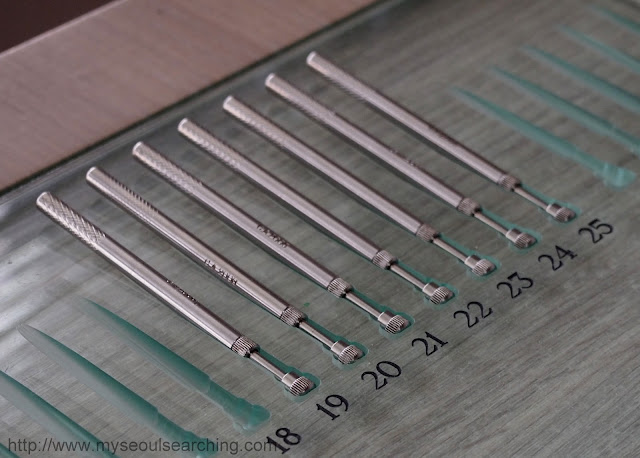 The pen-like device Dr. Park used during my acupuncture session. 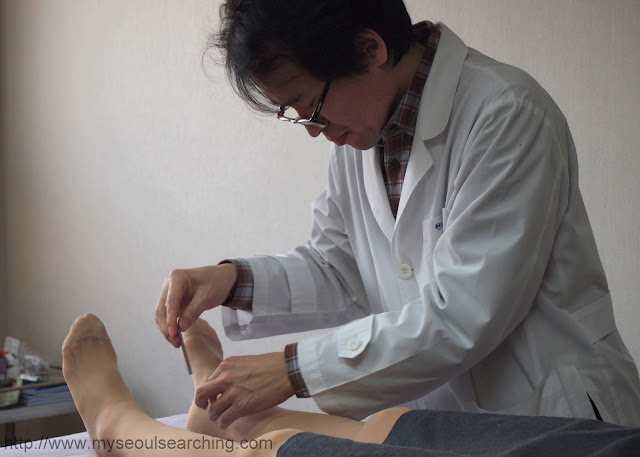 During my consultation, Dr. Park also classified my body in the Pulmontonia group, one of the body types determined by Dr. Do-won Kwon’s “Eight Constitutional Medicine” theory.  Dr. Kwon’s internationally renowned ideology is based on the traditional Chinese medical theory of body types but has been updated to include an additional four types.  Each body type has certain physiological strengths and weaknesses as well as particular behavioral and personality traits.

My Pulmontonia body type has a weak liver- which explains why I can’t hold my alcohol!- and strong lungs; as a result of the weak liver, medicine does not work effectively and/or causes undesired reactions, which has been true in many of my personal experiences.  I was given a dietary and lifestyle regimen to follow to ensure that my liver be strengthened and my other organs function properly.  Unfortunately for me, this regimen stated that I stay away from everything that I love, including meat, dairy, garlic, peppers, makgeolli, and even hiking and saunas.  I took a single glimpse of it and immediately tried to put it out of my mind.  It was just too depressing. 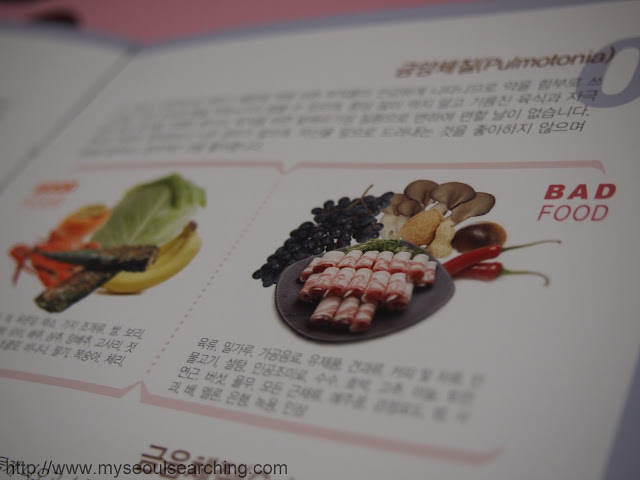 The depressing dietary and lifestyle regimen based on the needs of my body type according to Chinese medicine.

After I left the clinic, I did start to feel a bit better.  I returned again a couple days later for another session and within a few hours, I was seemingly healed and had no further pain for the entire following week.  It could have been a placebo effect, or it could have really worked.  I don’t doubt the treatment’s effectiveness, as the World Health Organization has claimed it to be useful in healing many different ailments and diseases.  Still, the effects eventually wore off, leaving me with the discomfort I had previous to the sessions.

I have not yet had the time to return for an additional treatment but I believe my relapse to be related to stress and the consumption of alcohol, coffee, and spicy foods that I wasn’t able to avoid this past week.  OK… maybe they weren’t all completely unavoidable but I have poor self control when it comes to food and drink.

It seems that I might have to give that dietary regimen a try after all, at least for a few weeks.  It won’t be a happy time in my life, but fortunately enough, chocolate is a food that I’m encouraged to consume.  I can do chocolate.  I can do a lot of chocolate.

Overall, I had a positive first experience with Chinese medicine.  It’s non-invasive, doesn’t require any fancy tests, is seemingly effective, and cheap.  Because Dr. Park’s clinic is located in Gangnam, it is one of the pricier oriental clinics in Seoul, but it’s still quite cheap at 20,000 won (USD$20) per session without insurance (and 15,000 for each subsequent session).  For less serious ailments like menstrual cramps, upset stomachs, headaches, and anxiety/stress, acupuncture is a treatment worth trying out.

Information: Seomoon Oriental Medical Clinic is open on weekdays from 10AM to 7PM and on weekends from 10AM to 2PM.  To get to there, take the Seoul subway to Maebong Station (Line 3).  Walk straight out of exit 4.  After crossing the first intesection, you will find the clinic in the first building on the left (Sanil Building) on the third floor.