By Mimsie Ladner on Tuesday, April 19, 2016
Italy may be on the other side of the world, but residents of Seoul will soon have the chance to taste all of the country’s regional specialties right here in South Korea.

Now in its fifth year, the Italian Food Festival in Korea brings together the best Italian restaurants in the capital to celebrate Italy’s most beloved dishes.

From May 1 to 31, each of the 12 participating restaurants will serve up an exclusive course menu including typical and authentic dishes, each from a specific region of Italy, prepared and selected by their own chefs.

Brera, located in Beotigogae near Itaewon, is one of the participating restaurants. Owned and operated by Giovanni Tamburrini, this no-frills joint packs in Korean and international diners alike thanks to its eclectic menu, fantastic service and authentic atmosphere.

“Italian restaurants operating abroad normally serve dishes which are known worldwide, like pizza margherita, arrabbiata and carbonara. Yet, Italy has plenty of less famous dishes which are just as good as the popular ones,” explained Tamburrini. “The Italian Food Festival gives Seoulites the opportunity to taste and enjoy the latter, having an authentic Italian experience without physically being in Italy.”

Brera will serve up fare from Lazio — the region from which Tamburrini hails — during the festival, and their special menu will feature Rigatoni alla Gricia, an older, tomato-less version of the more widely known amatriciana. The rustic dish boasts a signature sauce made of goat cheese and pork jowls, ingredients that ancient shepherds could easily stock, store and carry.

“It is fundamentally important to cook it in an iron pan, a secret that even reputable culinary schools have never known,” Tamburrini told Seoul Searching. 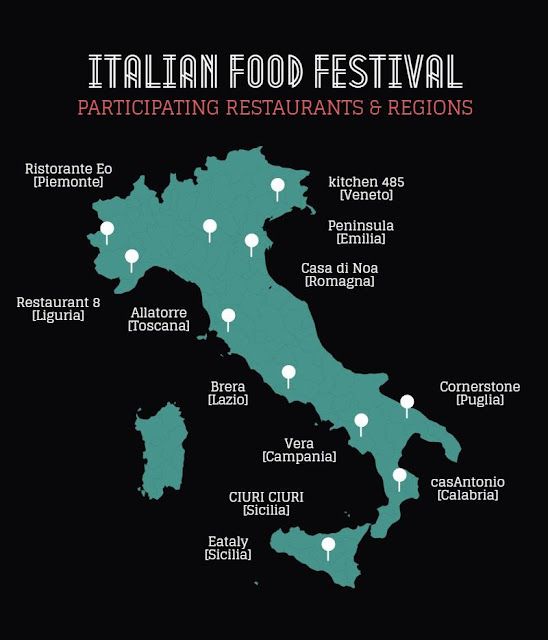 Adding to the accessibility of the festival is its affordability. Set menus start at 55,000 won, meaning you’ll be able to afford to eat your way through Italy without having to buy a plane ticket… or suffer through a bout of debilitating jet lag.

Words and infographic by Mimsie Ladner of Seoul Searching. Content may not be reproduced unless authorized.