By Mimsie Ladner on Tuesday, January 24, 2017
So you’ve got your new apartment all set up. You were finally able to find fitted sheets (for an exorbitant price, no doubt), you’ve connected adapters and transformers as needed and you even managed to put up a few pictures of family and friends back at home to make your new living space just a tad more comfortable. Yes, it’s time to relax and unwind.

Soon you realize your cable is limited to Korean variety shows with the occasional decade-old made-for-TV American movie you’re fairly certain no one you know has ever heard of. “No problem,” you say, “That’s what the Internet is for.”

Hulu and TV networks like ABC and ESPN disappoint with apologetic messages notifying you that their programs cannot be watched outside the States.

“Okay… so I’ll just listen to music,” you decide.

Not so fast. Pandora and Songza shut you down before you can even decide on your preferred playlist.

Your breathing becomes heavier and your heartbeat steadily increases. You find the strength to stand up and barely fall to the floor as your knees give out. You manage to make it to your co-worker’s place across the hall. He sees the fear in your eyes and needs no words to understand your worries. He sympathetically places a hand on your shoulder and assures you that things will be fine. Soon enough, he mentions three letters that will forever change how you know entertainment as an expat living in Korea forever: V-P-N. 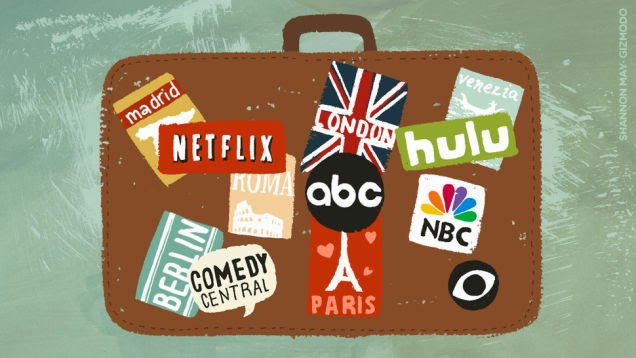 In simple terms, a VPN, or Virtual Private Network, is a discrete network of computers connected over the Internet. Individuals can use a VPN to gain access to network resources when they’re not physically on the same network (i.e. not in the same country) or for securing and encrypting their communications when using a lesser trusted public network.

When properly connected, an American-based VPN makes it appear as though your computer or electronic device (smartphones, tablets, etc.) is connecting to a network such as Spotify from inside the United States.

This ingenious system allows die-hard fans to watch the World Cup live as it happens without having to deal with a crummy, subtitle-less local network. They can also listen to location-restricted internet radio and check out their favorite television programs (Game of Thrones, anyone?) as they air instead of waiting for translations or rebroadcasts.

And for those that are interested in watching Korean movies and dramas, they can gain access to sites like Netflix that provide an extensive selection of translated Korean programs.

There are a number of VPN services to choose from, but I recently began using PrivateInternetAccess.com after becoming an affiliate with them.

I was surprised by the simplicity of the setup process using their easy-to-follow tutorials and wondered why I hadn’t signed up years earlier, before I became clueless as to what’s going on in American pop culture.

In addition to using a VPN to watch shows and listen to music on both my computer and smartphone, I can also rest easy knowing that my internet connection is secure, which is necessary since I pay my bills and do my banking online. So safe, in fact, that a slew of some of the biggest companies in the world (Forbes, Yahoo and AT&T to name a few) use PrivateInternetAccess as their go-to VPN.

And the very best thing about PrivateInternetAccess.com’s VPN service? The price!! To get to access all your favorite movie streaming sites and ensure a secure internet connection only costs $6.95 per month or $39.95 for an entire year.

So what are you waiting for? Sign up for a VPN today and you’ll be thanking me when winter (aka movie-watching season) rolls in.