Beef. It’s Not for Dinner.

Upon my departure from India and my arrival in Korea, I made sure that my first meal was a fresh, juicy cheeseburger with a heaping side of fries. Perhaps it was the red meat craving, ever-present in my American blood, or maybe it was just human nature taking hold, making me want what I couldn’t have, but regardless, nothing was going to stand in the way of me and the delectable beefiliciousness served up at Smokey Saloon in Myeongdong. I’ve decided that it must have been the sheer desire to have what was essentially unobtainable for two months because I haven’t really thought about burgers much since.

There’s no doubt that the world is pretty aware that most Indian people do not consume beef, but the reason behind this truth is lesser known. To begin with, 80% of Indian people are Hindus and another nice sized chunk are Sikhs; followers of these religions do not eat beef, but it’s possible this was actually influenced by the vegetarian principles of Jainism. It’s easy to see how the importance of the cow could have played into their own idolization during the development of these religions. Cows are considered maternal creatures, as they bear milk, so it is widely believed that they should be treated as one’s own mother would be. While this principle is still accepted by some observant Hindus today, it was especially true during the earlier days of India when food and nutrition were more difficult to come by. These days, this is particularly factual in rural areas where most families own one or two cows, as they serve an even more significant purpose. In addition to bearing milk, their manure is used to fertilize the soil or dried and made into dung patties to use as fuel. It’s common to see the village women constructing said patties on the side of the road; it’s also easy for one to recognize one’s proximity to the storage huts by the aromatic fragrance likely to knock you back if you get too close. 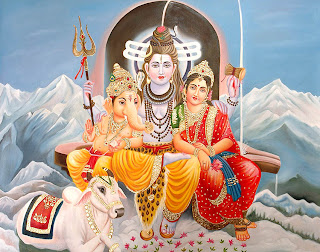 A portrait of the Hindu god Shiva and his family. Cows can often be seen in Indian art. (Photo credit: www.exoticindiaart.com)

The admiration the people of India have toward these animals is so great, in fact, that it changed the course of the country’s history. In the mid-1850s, there was a mass rebellion against British rule in India when the Brits attempted to coerce Indian troops in the service of the English East India Company into using rifle cartridges, rumored to be lubricated with grease containing cows’ lard. With this being religiously impure, the troops refused and were incarcerated. This infuriated their comrades, who shot their British officers and marched on Delhi. The brutal fighting ended in defeat for the Indians, but resulted in the abolition of the East India Company in favor of direct rule of India by the British. Furthermore, the Brits established a policy of consultation with the Indian people. 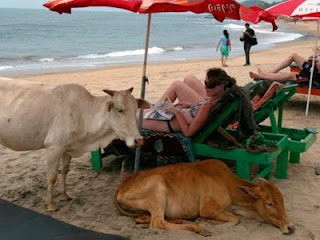 Cows resting on the beaches in the southern state of Goa. I mean, I’d hang out there, too, if I were a cow in India. (Photo credit: www.esquire.com)

These days, not too much has changed. Most cows are still allowed to roam freely throughout the streets, even in cities. Cows are the only creatures that vehicles yield to; I’m confident that they are well aware of this, as they walk around with noses upturned and seem to smirk with their eyes when they cause a traffic jam. While the monkeys of India, what with their opposable thumbs and stealth-like precision, may have the upper hand in snatching up the good grub from unsuspecting human passerbys, cows also get their fill of people food. They dine at an endless buffet of garbage and scraps on the side of the roads, as garbage cans are rare. I feel that most travelers would agree that this very image is one of the more enduring memories associated with India. That, and their lack of mention on menus, of course. 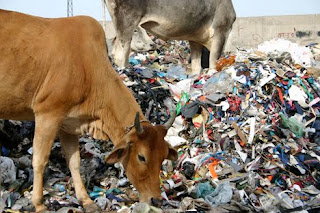 Most of India has outlawed the slaughtering of cows through legislative action, including the The Delhi Agricultural Cattle Preservation Act of 1994, prohibiting the sale and storage of beef. This seems to be highly enforced, even during the highly anticipated Commonwealth Games held earlier this summer. Although I had heard rumors, it was still a bit surreal to walk into McDonald’s and find no mention of a Quarter Pounder or Big Mac anywhere. Still, the restaurant chain was always packed out with patrons dining on the veggie burger, chicken sandwich, or the ever-popular Pizza McPuff. 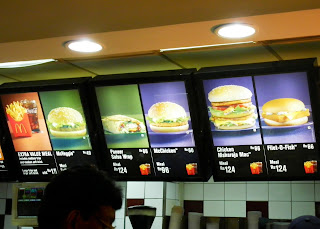 At a McDonald’s I dined in in Mumbai… no beef!

One of the more interesting byproducts of “the holy cow” used today is none other than its urine. While cow pee has been used in Hindu rituals as a purifying agent for some time now, it is reported that it has healing properties and can be useful in curing all sorts of issues from obesity to cancer. Enter “Gau Jal” or “cow water”, a new refreshing Indian soda which boasts cow urine as the main ingredient. Move over, Coca-Cola… I have a feeling this stuff is going global. 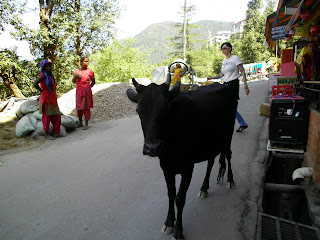 Cows walk alongside tourists, locals, and monks alike in McLeod-Ganj.

If you’re thinking that the cows of India (all 200 million of them) don’t have it so bad, you may want to think again. Though this animal has always been synonymous with both the ecology and the spirituality of India, it seems that things are changing. As Western demand for leather has increased over the years, so have the number of illegal slaughterhouses throughout the country. Cows are unlawfully transported to these institutions all the while being treated unethically; however, considering anything can be bought in India, including the silence of law enforcement, this often goes unrecognized. PETA has also been making an impression in the media lately, exposing the reality of how the Indian cow is treated, or mistreated.

In a country where poverty is so rampant and a typical rural citizen relies on the cow not only for his income but also his life, it’s difficult to define what is ethical. One thing is for certain, though. The “mother” cow, in all its gloriousness (and gangliness), will forever be a symbol of its worshiping nation and a being necessary to the cycle of life in India.