So I had originally intended this blog to be a nutshell of the religions of India and their role in the society of the nation. I then began to think about how dimensional religion truly is in India and ultimately became overwhelmed just thinking about it. The fact is that religion defines everything about India: its social structure, its traditions, its history, and its relationship with the rest of the world. In addition to the influence religion has on India, it would be impossible to cover each faith. Though Hinduism without a doubt has the most followers, there’s an expansive list of additional faiths that are growing with each passing day. Needless to say, I had to rethink the focus for this entry.

That’s when I remembered about a religion I had never heard of before traveling to India.

By the time I reached Delhi, temperatures had reached upwards of 120 degrees Farenheit. I had just been discharged from the hospital and was seriously considering booking a flight home, doubtful if I could make it another month. But, I wasn’t quite ready to give up on the country I had always dreamed of visiting. As soon as I was settled in at my Indian host family’s place for my orientation week for the volunteering stint I had registered for, I felt much better about the situation. I met the ten other volunteers my age and looked forward to a week of language and culture classes, in addition to some sightseeing and market trips in Delhi.

Despite the heat, we covered the must-sees: Qutb Minar, the Red Fort, the Jama Masjid mosque, and Rajghat, the site of Gandhi’s cremation. All were quite emotionally provoking. Yet, I felt especially inspired when visiting the lotus-shaped Bahá’í House of Worship. The lotus flower has become one of my favorite symbols over the past few years as I’ve learned more about its meaning in the Eastern World. It grows in murky water, yet when it blooms, it is untainted by the dark from which it has grown. It is beautiful, pure. In my opinion, there could not be a more appropriate architectural design for the temple, considering the ideals the religion stands for.

The Bahá’í faith was founded in 19th century Persia by Bahá’u’lláh, a self-proclaimed Messenger of God who left his princely lifestyle to spread a much-needed message of peace and unity. Bahá’ís believe that Bahá’u’lláh was not the first messenger of God, however. Bahá’í faith states that God is too powerful and mysterious for us mere humans to understand; therefore, he has sent prophets like Bahá’u’lláh to convey his message over the years. They have included: Abraham, Krishna, Moses, Zoroaster, Jesus, Buddha, and Muhammad. Essentially, the religion’s history has unfolded through these messengers of God, each of whom established a religion that was fit for the needs of the time and the capacity of the people. Therefore, the religions of the world are not seen as separate, but rather unified and progressive with time and followers of the Bahá’í faith find validity in most of these religions. 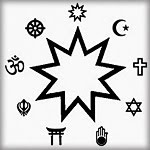 The many religions whose fundamental principals make up the Bahá’í faith.

Unity is the foundation of the belief: unity of God, unity of religion, and most importantly, unity of humankind. The most recent prophet, Bahá’u’lláh wrote, “The earth is but one country, and mankind its citizens.” And who is to argue? The religion’s objectives are discernibly flawless: unity of God, religion, and humankind; equality between men and women; elimination of all prejudice; harmony of religion and science; universal compulsory education; and elimination of poverty. One of the faith’s main pursuits is that of world peace. Sounds like my kind of religion… though they prohibit the consumption of alcohol (at least the Catholics got that right) and are against homosexuality, which, to me seems a bit hypocritical of the whole equality thing. Still, its headed in the right direction.

Since its formation, it has spread across 200 different countries and now has over 6 million followers (and maybe even inspired the Black Eyed Peas?). There are only 8 Houses of Worship throughout the world, but each welcome followers of all faiths; their scripture states, “…the purpose of places of worship and edifices for adoration is simply that of unity, in order that various nations, divergent races, varying souls, may gather there and among them amity, love and accord may be realized.” In my opinion, the most aesthetically impressive House of Worhsip is in Delhi.

The giant lotus sits at the end of a long entrance path that is seemingly always flooded with tourists. Since its construction in 1986, it has become one of the world’s most visited buildings (moreso than the Effiel Tower and the Taj Mahal) and there’s no doubt each visitor leaves feeling enlightened. Pools sit on all sides of the building, giving one the feeling that the lotus is floating on water, tranquil despite the crowds. Once inside, visitors are to remain silent as they take in the beauty of the building. Posted on the walls are quotes from texts of various world religions on how humans should treat each other and the world. The very message that is promoted by the religion makes the building a target for terrorism: one can not enter without passing through security. It’s sad that such a serene setting is interrupted by that very realization. 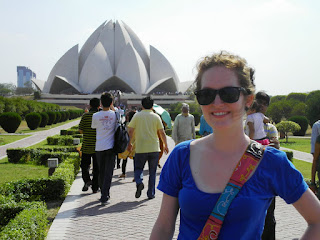 Me in front of the House of Worship, along with hundreds of other tourists.

After wandering around the temple and the nearby museum, one is quick to learn that all religions, in spite of their differences, were all founded on the same principals and have the same answer to the social problems of the world. It’s a wonder how over time lines have been drawn, setting us apart from each other, creating prejudices and hate when we are fundamentally the same.

Though I was raised Catholic and attended Catholic school until my graduation from high school, I feel so fortunate to be exposed to various religions throughout my travels. It really opens one’s mind to question what is truth. My current beliefs are a hodgepodge of those of the world’s religions, much like the Bahá’í faith. And, who is to say what truth is, when in fact, the purpose of religion is to unify a people and promote love?

It’s a young religion, but I have a feeling the Bahá’í Faith will continue to grow and flourish as our world looks for an avenue toward a harmonious world, which can only be found with unity and tolerance. As terrorism and war and religious intolerance add to the murky waters of our world, perhaps beliefs like those of the Bahá’í Faith will slowly but surely let the lotus of peace bloom through.