Tokyo wouldn’t be the same without its legendary skyline of flashing signs of neon and seemingly indecipherable characters, at least to us Westerners. Yet, in a city where uniform electronics shops, yakitori vendors, and kareoke rooms adorn every street block, sits a neighborhood bursting with character and personality, unique in every meaning of the word.

Harajuku was at the top of my list of things to experience in Tokyo and remains as one of my most memorable experiences while I was there. I had planned to go on Sunday, as this is the day when its most famous visitors- Harajuku girls- wander about decked out in their bizarre apparel to entertain the crowds, knowingly or unknowingly. These girls, many of which are “outcasts” in high school or twenty-somethings tired of their 9-5 “coffee girl” jobs, became particularly well known in the West via Gwen Stefani, pop star and purveyor of funky fashion who uses their styles in her music videos and even has a song about them.

When I exited at Omote-sando station early in the morning, I was sure I was in the wrong place. The sidewalks were wide, the streets were clean, and there was hardly any traffic. I continued to walk in the direction of Harajuku and surrounding me were the names of those very people that have defined fashion as we know it: Louis Vuitton, Prada, and Chanel to name a few. I felt more like I was in Paris or Milan rather than Tokyo. I’d later find out there were tons of cozy cafes and awesome smaller stores specializing in trendy second-hand clothing at amazing prices in the area.

Seeing as nothing was happening yet, I headed to Meiji Shrine where I met a little Japanese man who I imagined would be very much like my grandfather, if I were Japanese. Speaking almost no English, he led me to a traditional wedding being held at the shrine in addition to a samurai-like archery competition. It was all very cool, but as I previously mentioned, I’m not blabbering on about landmarks this go around. After a few hours there, he pointed me in the direction of Yoyogi Park, another destination known for it’s colorful frequenters. After snacking on some takoyaki (octopus lightly fried into batter ball), I continued my search for the bizarre at the park.

I knew I was headed in the right direction when I immediately saw a motley crew of people entertaining themselves and others in various ways. College guys were practicing a choreographed hip-hop routine while a man played the saxophone nearby. A group of older women engaged in a tai chi session. Young adults played random instruments while their peers initiated interpretive dancing. What was so strange about all of this was that they were all seemingly unaware of each other. Rather than doing these things as a means of performance for those around them, they were simply carrying on with their own hobbies. Yet, I can’t blame them as the atmosphere of the park was a peaceful one and the oasis of green is no doubt a nice getaway from the nearby skyscrapers and cement of Tokyo. It felt nice being in such calm surroundings, but I still hadn’t found what I was looking for.That is, until I hit the gate of the park. In the time that I had walked around Yoyogi Park, gangs of Japanese clad in leather, hair perfectly gelled in Fonzie-fashion had taken over the entrance. Their rivals, donned in poodle skirts and pony-tails were nearby. Each group marked their territories with ice chests of beer, picnic mats, and speakers. One group would start the Twist and soon thereafter the next group attempted a one-up with louder music and a better hand jive. It was a bit surreal seeing these Japanese people dance to American music from the 50s. Again, this is what they do on the weekends, it’s not a performance. Nevertheless, they attracted quite the crowd and it was obvious that everyone, greasers and bystanders, were enjoying themselves. 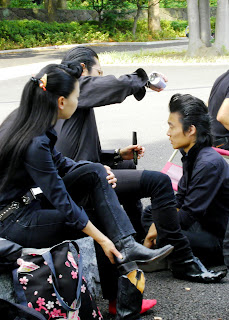 Rockabillies outside Yoyogi Park primping before twisting it out.

It was nearing 4PM and I really wanted to get a view of the city from atop the Tokyo Government Buildings before sundown. I was so upset I had spent all day in the neighborhood and hadn’t seen a full fledged Harajuku girl, though there had been plenty of girls with the toned-down Harajuku style. Just as I was about to give up on the hunt, I decided to drop in Laforet Department Store on a hunch. I headed down to the basement and as soon as I saw the duds advertised on the mannequins, I knew I had hit the jackpot.

Store rooms whose clothes looked like they belonged in Halloween warehouses covered every square inch of the basement and those working there were just as colorful as the apparel on display. I was so excited to finally see the goths and what I like to refer to as Lil-Bo-Peeps wandering around looking for accessories to match their styles. 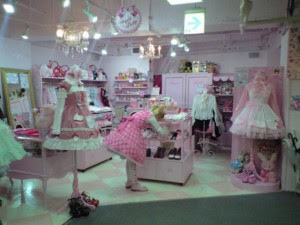 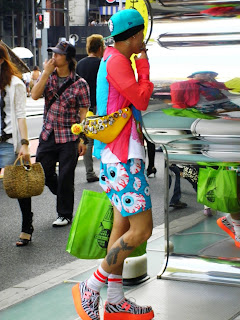 The fashion styles of Harajuku aren’t limited to girls. Here, a “Harajuku boy” takes a smoke break outside Laforet Department Store.
I suppose I should mention that the Harajuku subculture consists of many different styles.

There are many “Lolita” styles in Harajuku, all of which involve modest clothing, a movement to fight against the trend of showing off more skin that is becoming more popular in a westernizing Japan. One of the most popular, gothic Lolita, being a goth-like style of course, involves a lot of black. However, this look is not to be confused with the baggy pants and colored contacts associated with your typical Marilyn Manson fan, though those types can be seen in Harajuku, as well. Gothic Lolita involves more feminine undertones so the apparel is much more elegant in nature; it also incorporates vintage styles pulled from the Victorian European era.

More upbeat than Gothic Lolita is Sweet Lolita, a fashion inspired by Rococo fashions from 18th century Europe. Those donning these styles look very childish and they make sure to carefully accessorize in pretty pastels as to pull off the look. An entire outfit usually involves around a theme, such as cute animals, sweets, and fairytales. I even saw one girl on the subway who pulled off an Easter theme, complete with a powder pink petticoat, lace parasol, and Easter egg and bunny accessories. I’ve learned that many girls make their own dresses, as a complete outfit from a specialty store costs $300+. 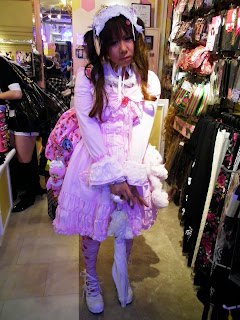 A “sweet Lolita” takes a break from accessory shopping to pose for a photo at BBeBee inside LaForet Department Store.

Decora styles take a flamboyant approach by combining lots of colors and accessories, hence the fashion’s namesake. As I was entering a used clothing store near Omotesando, I heard an usual clanking and jingle jangle of plastic. As I looked ahead, I saw two girls that appeared to have just been vomited on by Rainbow Brite. Adorned in threads of every possible color, they had systematically placed hundreds of little buttons, charms, and small toys all over their clothes. I don’t know how they can walk around in those outfits all day without getting a headache, but they seemed to be enjoying themselves. 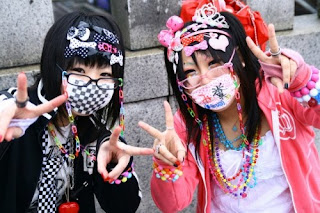 The sub-styles don’t end there, though. Harajuku has its fair share of punks, anime characters, cartoon characters, and wamonos, a fashion that combines traditional Japanese clothing with some Western alterations. As weird as it may seem to us outsiders, this new generation of fashionistas, with their wild hair and loud makeup, rock their styles with a confidence usually only found on a Fashion Week catwalk. As I watched these girls shopping with friends, laughing, and probably gossiping about boys, I realized they’re not any different than my friends and me, with the exception of their outward appearance, of course. I would have loved to have chat with them, but, like many people I met in Japan, couldn’t speak much English. Many of them were kind enough to pose for some pictures, which made my day-long Harajuku hunt totally worth it. 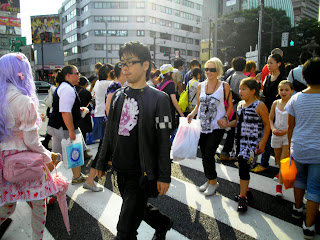 A young tourist expresses her surprise when seeing a Harajuku girl while crossing the street in Harajuku. 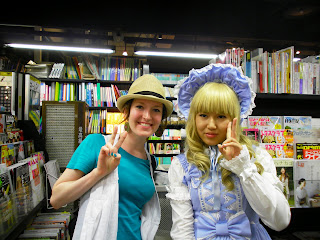 Me with a Harajuku girl in the bookstore at Laforet.

While some of these girls chose to live these fashions as a lifestyle and take on the personalities of the clothing, many do it simply to be cute and creative. Though many middle aged men purchase pornographic comic books (available at the closest subway newspaper kiosk) that feature characters bearing much resemblance to these Harajuku girls, it should be known that the girls do not dress like this for male attention. In fact, it’s just the opposite. In a male-dominated Japan, where women have typically been submissive to society’s demands, this new generation is simply fighting the norm of conformity and challenging the traditional gender roles such as entering into a “low importance career” or making motherhood the ultimate life goal. Instead, these girls can resort to their very own fantasy world, if only on the weekends. The Harajuku movement has also transformed the common Japanese beauty ideology into a more “beauty is in the eye of the beholder” outlook.

The styles of Harajuku have no doubt created an outlet for societal change and gender role transformation. Still, despite its motivating foundation, it seems that its popularity as a means of expression and fashion is growing. As it spreads from the streets of Tokyo to other countries around the world, it will continue to evolve and be an avenue for self expression, not only for women, but men and children, too. And, might I add, who wouldn’t want to live in their own fantasy world in our otherwise uniform society?