Memiors of a Geisha (for a day)

Despite the nation’s rapidly changing society and uber-modern facade, tradition still remains to be an important thread in the intricately weaved fabric that is Japan. It is noticed in the food, in the clothing, in the sports, and in the very movement of its people. Yet, tradition makes its strongest presence in Japan’s most familiar, yet mysterious icon: the geisha.

The very image of the enigmatic oriental woman, draped in a silk kimono of rich colors, face painted white, hair adorned with ornaments, moving with consummate grace provokes a curiosity in us all. In the West, we have no equivalent to the geisha and though her image has become quite popular in movies and media, we still know very little about her and the history of her being.

Geisha, quite literally meaning “artist” has been a Japanese icon as early as 800AD. While it was accepted that men usually went to courtesans for sex, pleasure districts were established and thrived throughout Japan in the 18th century. These districts were not the grungy red light districts that are around today, but were quite glamorous and offered entertainment such as singing, dancing, and the playing of musical instruments by beautiful women. Thus, enter the first geisha, though most of them were forbidden to sell sex. It was quite common, however, that a maiko’s (geisha apprentice) virginity was auctioned to the highest bidder, the maiko’s sponsor. This, however, was not considered prostitution and usually resulted in large sums of money, used to promote the maiko’s coming of age, or debut as a geisha. While this reportedly still happens in parts of Japan, it was technically outlawed in the 1950s. These days, the sex lives of geishas are their own personal business.

During WWII, the art of geisha ceased to exist, as most of the women had to go to work in factories. Teahouses and geisha houses, all run by women, were forced to shut down. As American GIs began to inhabit Japan, prostitutes began dressing as “geisha girls” to lure the soldiers, thus tainting the name of geisha, even to this day. When the geisha houses were allowed to reopen, most women were hesitant to return to the practice. Those who did, however, decided that keeping with traditional standards was they key to the survival of the art, though they did create more rights for the geisha.

Even today, most girls enter a geisha house to be a maiko when they are teenagers. They are supplied room and board and training under a contract. A maiko’s training is quite expensive and she usually remains in debt to her keeper; until this debt is repaid, she cannot move out and live independently. She starts her training by observing geisha and then learns the formal arts and social and entertainment skills, like conversation, required of the geisha. Modern geisha are paid the big bucks to converse at parties and social functions. 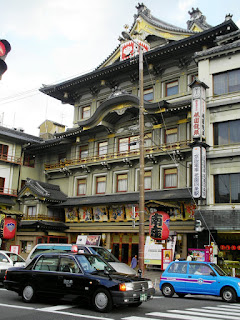 A traditional kubuki theater in the heart of Gion, Kyoto. 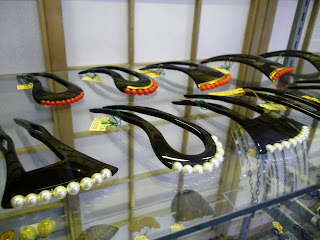 Combs for sale in a storefront in Gion. Prices were upwards of $1000USD.

While there aren’t as many geisha and maiko in Japan today as there were pre-WWII, their presence is still strong, especially in the Western city of Kyoto. I made sure that Kyoto was on my itinerary, mostly for that reason, and I refused to stay anywhere outside of Gion, the geisha district. I was told that the best time to see them was around 6PM, as it is the time they venture off to their appointments for the evening. I walked around Gion without success, until about 9PM as I was wandering down a small street lined with a flowing stream. It was such a beautiful night and this particular street is lined with fine dining restaurants that don’t look like much on the outside, but are stunning when you can steal a peek through a window. 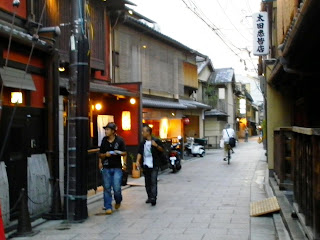 A typical street in Gion, lined with traditional tea houses and Japanese restaurants.

As I peered over the stream and into one of these restaurants, I suddenly noticed a very familiar image. I took a closer look and couldn’t help but recognize the white makeup and famous up-do. It was a geisha! Unfortunately, the zoom on my camera wasn’t good enough to get a decent shot, so I kept walking down the street. I paused to check out a small temple when I heard a window open and laughter echo out onto the street. I looked up to the second floor of the building and saw a business man with two geisha chuckling on either side of him. I was in awe as I stood so close to the real thing, taking in the fact that I was in the premier geisha district of Japan.

I was unfortunately unable to see any other geisha during the remainder of my trip, but I made a point to have a more personal experience than merely passing by them on the street. That’s when I headed to Aya, the place for getting a geisha makeover. Yes, I had been looking forward to this from the moment I decided I would go to Japan. I couldn’t contain my excitement as I entered the 100 year old townhouse in Gion. After having a cup of tea in the waiting room, I was brought into the changing room where I doned some undergarments and tabi, traditional split-toe Japanese socks.

I headed into the makeup room where my geisha transformation began. My stylist, whose only English was read from a pre-printed script, first applied some baby oil and the iconic Neri-Oshiroi, or white powder, to my entire face and neck. Fortunately enough for me, the makeup is no longer lead or mercury based, as it once was in the olden days. The white face was creepy enough, but then she proceeded to darken my eyebrows in addition to lining my eyes with blacks and reds. She added a couple layers of red paint to my lips.

A couple Japanese girls were also getting a makeover but I looked particularly out of place and was thus stared at the most. I finally had the wig added at the end of the makeup session. It was pretty cool how they made it look so natural. They pulled a good bit of my own hair from the front of my head and overlapped it on the wig. They then sprayed it black with some temporary dye.

I was finally ready to done my kimino and was shown a wardrobe of about 15 different styles. I opted for the most oriental looking one and then had my attendant slowly but surely put everything into place. I had no idea the actual process of putting on a kimono was so complicated. There were a number of ropes and strings pulled this way and that and at least 20 pounds of fabric were tied where they needed to be. It was so, heavy, in fact, that I needed assistance to stand up after being in a kneeling position for a photo. I let my helper pick out my hair accessories then chose which style photos I wanted. 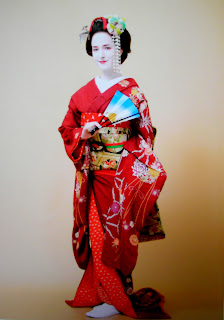 The final product, an American geisha. 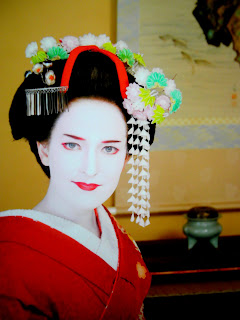 I was photographed in a nicely decorated studio and positioned into place by the photographer, which no doubt saved me from feeling and looking even more awkward in picking my own poses. Honestly, I was a little sad when I had to remove the makeup and hairdye (which took FOREVER) and transformed back to my boring American self. I did feel wayyyy dorky and the experience was a bit pricey but the pictures actually came out pretty well, considering I’m a white girl and all. It was a fun and memorable couple of hours, and when I do finally have grandchildren, not only can I tell them about geisha, but I can also show them proof that I was one, if only for a day.