After each 45 minute class at Seoul English Village, teachers and students are given a 15 minute break to do what they please, though most recently, a hand washing session has been deemed a necessary action to take during this time. Depending on the situation, I may spend this time being fanned and fed candy by students or chatting with teenage girls about my favorite Korean drama. Most of the time, however, I head to the lobby to chat with my fellow teachers. About a month ago, however, I decided I would practice reading Hanguel and picked up a Korean newspaper. I came across an advertisement that contained the names of some of my favorite K-pop artists: Girl’s Generation, Super Junior, and 2PM to name a few. Imagine my excitement when a Korean co-worker translated that it was a concert and it was free.

I effortlessly recruited a group of friends, including a very brave male teacher, to tag along with me and we reserved our tickets as soon as they became available. We counted down the days until the big night. Just as we were about to head out, I checked the website to learn the concert had been postponed due to the former president’s passing away. It was especially sad to see that our beloved BBF’s “Ji Hoo” and his band, SS501, had been taken off the lineup for the rescheduled performance.
It was surprising to see that everything in Seoul, including the red carpet event of the Chungmuro Film Festival and the Seoul Open Night, came to a stand still over the President Kim Dae–jung’s death. I ventured off to City Hall and was taken back by the crowds paying their respects to their former leader; even children lovingly clutched on to yellow balloons imprinted with the president’s photograph. Walking past storefronts and restaurants, I noticed that everyone’s eyes were glued to the TV screen showing the president’s memorial.
I wondered what would happen in America in the case of a former leader passing away. Flags would definitely be at half-staff and a memorial would no doubt be held, but I think this would be the extent of it. I then remembered that this president was so influential in guiding the nation through some of it’s darker days of recent times, and pulled the nation out of an economic crisis. He even won the Nobel Peace Prize for bettering relations between the two Koreas. The nationalism of Koreans is inspiring and the love for such a notable leader is extremely admirable. 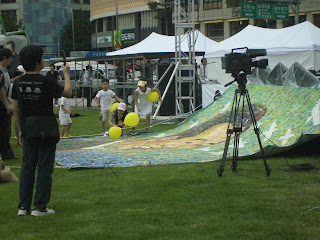 A mural of President Kim Dae–jung in front of City Hall after his death.

The day of the Korean Wave Festival finally came and we began our two hour trek on the subway to Incheon. After making our way to Munhak Sports Complex, we attacked the food stalls that lined the sidewalk. After chowing down on some chicken-on-a-stick and twisted donuts, we walked past the vendors selling binoculars and glowsticks, and got in the ridiculously long line. Jeanette noted that if any of us were going to catch “the swine” it would be at this concert. I joked, saying that we would most likely have to have our temperatures taken to be allowed in, what with the fear of foreigners contaminating Korea with the swine flu. Sure enough, as we made our way to the front, we saw two Koreans donned in bodyguard apparel and face masks taking every single person’s temperature. Fortunately, we passed the temperature checks and were then sprayed down with what I can only guess to be a sanitizing mist machine. Sure, it seems bizarre, but I have to give it to the public health system of Korea- it was a pretty damn good idea. 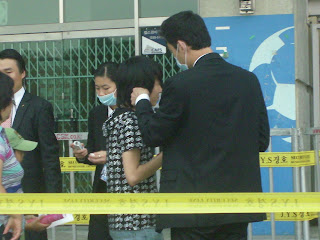 Everyone had to get their temperatures checked upon entering the concert.

We finally made our way to our seats in the nosebleed section, though we were expecting to have VIP access to the foreigner seating. Apparently we didn’t have the right tickets and security wasn’t budging, so we kicked our feet back and waited for the show to begin. As we waited, cameras caught shots of some of the people in the audience. I was expecting them to really ham it up, as there was a huge screen visible to the thousands of people seated at the stadium, but instead every single person shied away, covering their faces. With that exception, the atmosphere of the show was very exciting and the stage set very impressive throughout the entire event. 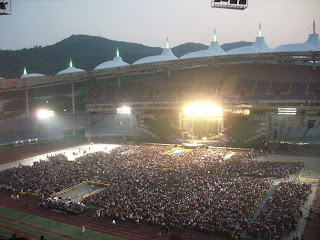 Inside the sport’s complex waiting for the concert to start. 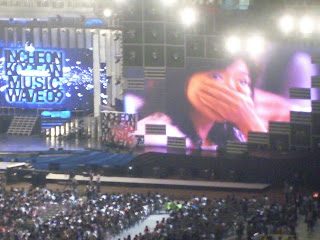 One of the very shy people in the audience caught on camera.

The audience cheered as their favorite singers were announced and I soon had flashbacks to the Britney and NSYNC concerts I attended in junior high. Still, there was a difference: everyone, including crazed girls, stayed seated through the entirety of the show. Each singer or group did a set of about three songs each, including their most popular hits. Screams grew in intensity, including from us, as the more well-known entertainers, like Shinee and Super Junior, hit the stage. We couldn’t hold back singing the “Gee” chorus when Girl’s Generation performed and I became a bit overly excited when 2PM sang “Again and Again.” Rain, the final performer, had the most fans by far and had a good finale. Overall, the concert was a fun Korean experience. We also managed to unknowingly see the last performance of Jaebeom before he was kicked out of, or “left” 2PM and sent back to America this week for his anti-Korea attitude. 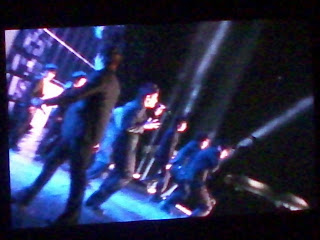 I think this was Super Junior performing “Sorry Sorry.” 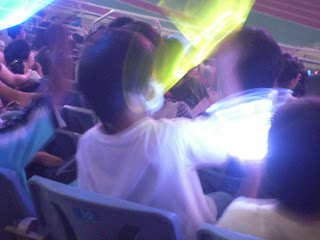 Only in Asia do you see a masked child rockin’ a glow stick at a pop concert.

I feel like I’ve really experienced Korean pop culture now that I’ve witnessed the K-Pop phenomenon in person. Now… if only I could see Big Bang and hear 2NE1 sing my anthem live, I could die happily. Well, maybe not, but it would definitely be the highlight of that hypothetical week.