“Drip, drip, drip,” replied my traditional Vietnamese coffee as it trickled from filter to glass over sweet condensed milk.

Saemi and I sat in low plastic chairs just outside of a hole-in-the-wall joint serving customary cuisine. It was the perfect Vietnamese breakfast- coffee and bánh mì, a sandwich of egg, cheese, and fresh vegetables and herbs layered on a crispy baguette. Enjoying the food, we took in everything around us, happily allowing each of our senses to be overloaded. We then headed across the street to Sinh Café and boarded our designated tour bus.

“Ladies and shentlemen,” our guide started, “welcome to Saigon.” As our bus headed southward toward the Mekong Delta, and our guide gave the same narrative as the day before, I kept my eyes peeled through the windows on the passing city. Even after a few days of exposure to Vietnamese traffic, I was still a bit dumbfounded at the number of motorbikes that maneuvered about the highway. Of the 7 million people that live in Ho Chi Minh City, half of them own motorcycles. (Motorbikes are also considered a measure of social status. It is said that a young guy can’t get a girlfriend if he doesn’t have a mororbike.) Of course, it was only a short time ago that the bicycle was the primary means of transportation. However, China took advantage of the demand for a faster, more efficient way to get from point A to B, so they mass produced the motorbikes and now everyone and his brother can afford to own one in Vietnam. It’s not uncommon to see entire families piled on a bike and for the foreigner traveling throughout the country, it’s a great way to get around, though it did get entirely aggravating being asked if I wanted a ride every two minutes. The sheer volume of bikes also makes crossing the street ostensibly impossible; it was suggested to me by a local that I just close my eyes and cross the street, as the drivers typically maneuver around the pedestrian. This detail, however true, doesn’t change the fact that even the sight of a crosswalk in Saigon is a bit daunting.

The scenery generated a sense of awe inside of me and made the two and a half hour ride seem much shorter. Upon exiting the bus at our destination, an old woman put a conical hat on top of my head and asked for a dollar. Seeing as the sun was anything but forgiving, I decided it’d be a good means of protection and didn’t bother negotiating a price. We walked a short distance to board our boat then headed off to see the Cai Be floating markets. As we cruised past river homes capped with satellite dishes, vendors skippered their nautical markets around the Tien River, selling produce and other wares to passersby. I had expected to see more boats, but considering the markets open at 3AM, things had slowed down a bit. They advertised their fares by hanging a sample, whether a bunch of bananas or a single melon, on the masts of their boats. It occurred to me that this was the way these people and their ancestors have made their living since it was first created by the Nguyen Dynasty in the 19th centry; I couldn’t help but wonder if the imagery surronding me now looked the same as it during those early years. 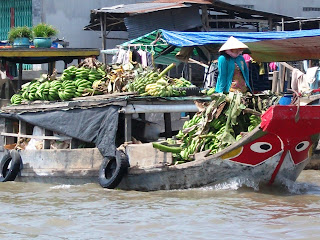 A vendor sells bananas from his boat at the Cai Be floating market. 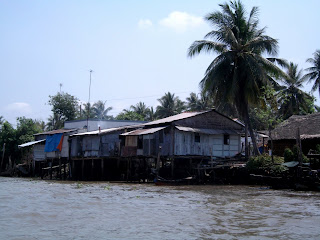 The river is an integral part of life- both at home and at work- for the people of the Mekong Delta.

We stopped at a nearby bank to get a glimpse into the life of the locals. I was surprised to be able to walk past the residents’ homes, whose doors were open, exposing women cooking and barely clothed children running around. Uniformed teenagers passed us on their bikes, most likely headed home for lunch. Though I knew tourists flocked here daily, it was obvious that life went on as usual for the residents. We were allowed to taste honey right from the source- yes, I put my finger into a bee-covered comb. We watched rice paper prepared to dry in the sun and sampled fresh coconut candy. Suddenly my attention was caught. “This coconut candy made with durian. This coconut candy made with almonds. This coconut candy made with penis.” HUH?! I thought to myself and soon realized I wasn’t the only one who had heard what he had said as a few around me were giggling. “Yes, the penis one my favorite.” Saemi and I got a good laugh out of it when we finally realized he was saying peanuts. Vietnamese accents would continue to throw me off during my trip. 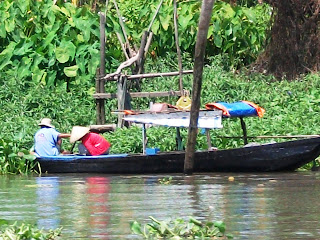 Fisherman on the river. 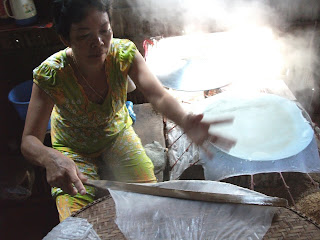 A local makes Vietnamese rice paper, a process requiring a lot of time and skill.

We had a nice lunch in a tropical garden adorned with colorful flowers, arcs of greenery, and various topiary masterpieces. As we headed back in the direction of our bus, Saemi and I talked about dinner options and tried to guess where our tourmates were from. We were permitted to have a look around a local market in Vinh Long and soon settled in the shade for some more delectable coffee. Though the ride home seemed a bit longer (and hotter), we soon headed to a bustling street restaurant just next to the one we had dined at the night before. After scarfing down some bánh xèo, Vietnam’s take on the French crepe, and some DIY grilled pork/rice paper dish, I decided to wash it down with some beer. I told Saemi how much I enjoy being gastronimcally adventurous during travel and that I was so fortunate to have never been sick from foreign food. “Knock on wood,” I noted as I pounded a few times on the table. 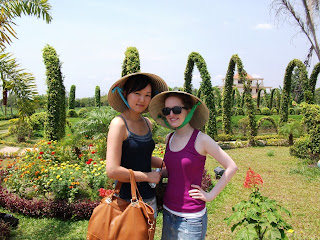 Saemi and I sporting the conical hats during our lunch. 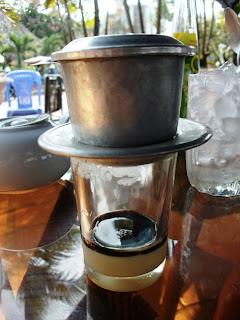 I wanted more and we found ourselves enjoying a couple rounds of desert after our fulfilling dinner. I tried a nicely flavored takohc cake and sweet mango juice while Saemi opted for some of the country’s renowned ice cream. We scooped up some tropical fruit and enjoyed a midnight feast of green oranges, grapefruit, and dragonfruit once we reached home. Settling in for the night, Saemi asked me what “knock on wood” meant. I told her it was a superstitious action to ensure that your good luck regarding whatever the said issue would not change.

Looking back on it, I guess that table was made of plastic.