By Mimsie Ladner on Monday, March 29, 2010
After having a morning manicure, Saemi and I headed back to her place to be treated to a homemade meal. Saemi’s mom had cooked up some delicious bulgogi and kimchi– the best I’ve had, mind you- and I couldn’t help but scarf down a big portion of the deliciousness. I guess it’s a good thing that in Korean culture, it’s appreciated if the guest eats a lot. Soon enough, it was time for me to catch my flight to Hoi An. We said our goodbyes and I jumped into a waiting taxi outside the apartment.

As I headed to the airport, I couldn’t help but admire and appreciate the fashions of Saigon. Saemi had pointed out some particularly ugly outfits, but this was the first time I was able to watch it all pass me by. The favorite style of Vietnamese women is the brightly colored, largely patterned two-piece. I’m pretty sure every woman in Vietnam owns at least a dozen of them, and every street has a few vendors selling only this apparel. It’s also not unusual to see a hodgepodge of an outfit of mismatched clothing items seemingly thrown together in the dark. My favorite was sported by a motorcycle-driving, fruit basket carrying woman; it consisted of a spandex leopard print shirt, nylon sports pants, pink and blue stripped socks, peep toe gold stilettos, and the essential Vietnamese accessory- the conical hat. It’s safe to safe that Saigon- or any city in the country, for that matter- will never rank among Milan or New York in terms of fashion. Nevertheless, I appreciate the styles that are characteristically Vietnamese- their fashion complements and adds an undeniable flair to the culture.

Caught up in the sights of the city, I was completely oblivious to the fact that there were two terminals at the airport, and failed to tell my driver that I was flying domestically. Before even making this realization, I was bombarded by a group of Vietnamese women who began touching my skin and hair. I had become used to this over the past few days, so I agreed to pose with them as they whipped out their camera phones and expressed their amazement over my white skin. Others noticed the commotion and joined them in showering me with compliments. I don’t care who you are, it never gets old being idolized and told you’re beautiful, even if it is from random strangers who find excitement in talking to foreigners. An airport attendant offered to walk me to the terminal. “I like to practice my English,” he added. I made with time to spare after boarding my late, crowded, and somewhat ghetto plane. Still, it was a relief to be traveling off the frantic roads of the city.

As the plane began to ascend over DeNang, I looked outside the window to discover one of the more picturesque scenes of my travels. Below me sat houses of various colors, never-ending rice paddies, pagodas, and winding rivers accommodating shifts of fishermen. I was greeted by my driver and immediately regretted sitting in the front seat. We spent most of the 40 minute drive to Hoi An in the wrong lane, face-to-face with oncoming traffic. I thought to myself that my mother would never make it here. I recollected a summer vacation to the Rockies in Colorado. As my dad drove up a winding mountain with a steep drop-off and no emergency lane, my mother lied face down in the back seat, praying the rosary. I attempted to create my own distraction by watching the clock on the dashboard. Still, every few seconds, vicious honks reminded me of the pressing danger just outside the vehicle. I began to count the driver’s honking- 19 times in 5 minutes. Later in my travels, a Vietnamese man told me that the honking was not meant to be rude, but just a method of providing a friendly heads up to the slower driver in front to get out the way. 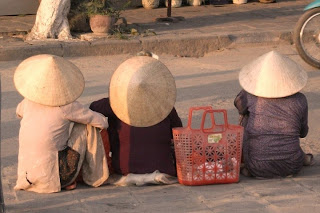 Women doning the traditional conical hat sit,waiting for customers to buy their wares.

Not soon enough, we parked on a sidewalk and I was told we’d have to make the rest of the trip on foot, as there were no cars allowed in Hoi An Ancient Town. It was just a hop, skip, and a jump to Minh A Ancient Lodging, a spot recommended by Lonely Planet. I was greeted by the guesthouse’s equivalent of a receptionist and as I filled out paper work, I caught her nonchalantly holding her arm near mine, comparing our skin colors. She then showed me to my room and I immediately fell in love. There was no air conditioning, no internet, and dreadful fluorescent lighting, but also an overpowering element of character that made up for it all. Over 100 years old, it was adorned with antique wooden doors and windows that led to a mini balcony lit with Chinese lanterns and overseeing a charming courtyard. The bed was draped with mosquito netting and fresh flowers sat on the desk. I knew there were more comfortable accommodations, but this was exactly what I had hoped for- a room with Vietnamese appeal. 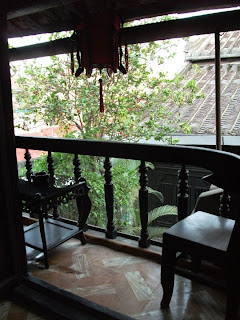 The balcony of my quaint hotel room at Minh A AncientLodging in the middle of Hoi An Ancient Town. 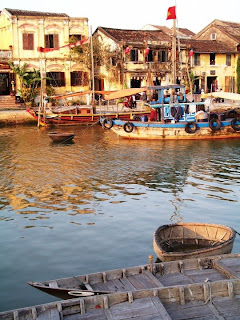 Breathtaking views along the river.

I ventured out to the town where I was quickly approached by some women who, after chatting me up, dragged me into their tailor shop. After an hour, I had somehow been measured, designed a dress, and picked out material for two pair of pants. I don’t know how they do it, but they know how to make a sale. By the time I left, the sun was setting on the river, fishermen rounded up their catch of the day, waiters and waitresses attempted to reel in potential, hungry customers, and lanterns of every shape and color lit up over the dirt roads and alleys of the ancient town. After realizing that almost every restaurant of Hoi An boasts the same menu, I grabbed a seat at Trick’s Café. I wasn’t very hungry- highly unusual for me- but still ordered a large salad and pizza and consumed most of it. After strolling through some art galleries and old bookstores, my stomach began to demand that I return to my room. 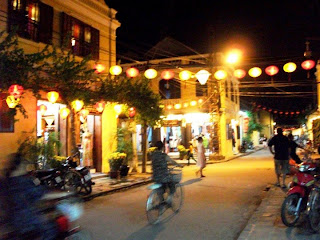 Delicate Chinese lanterns light up the streets of Ancient Town in the evenings. 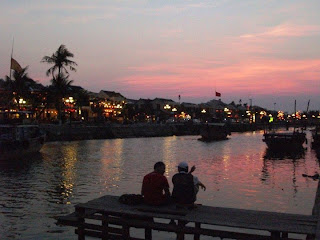 A gorgeous sunset over Hoi An.

I was able to change into my pajamas and settle into bed just before my insides began to churn about as if in a blender. And so began the worst night of my life.