Of the many things I enjoy experiencing while traveling, the pop culture of a country is near the top. I feel that it can say a lot about a country’s economic and social progress, in addition to its people’s state of mind. It didn’t take me long after arriving in India to see that the music, film culture, and celebrity world are so ingrained into daily life in India, that it has truly become a way of life for its people.

Perhaps India’s most well known pop cultural icon is that of Bollywood. Mention the word to a non-Indian and there’s no doubt that he or she immediately conjures up images of brightly colored saris, funny dance moves, lip-synced singing, and poorly organized music videos broadcasted in Indian restaurants throughout The Western World. While I still think of these representations as a nutshell version of Bollywood, I also came to realize over my two month adventure throughout the subcontinent that it truly is so much more.

“Bollywood” (think Bombay+Hollywood) refers to a particular aspect of Indian cinema and was formally known as Hindi cinema. The name dates back to the 1970s when India overtook America as the world’s largest film producer. Though this seems to be quite recent, India has been producing critically acclaimed films since the 1940s, most of them focusing on social issues that the country is still subjected to today. Since then, romance and action films have become the most popular genres with the people as a whole. So popular and in demand, in fact, that Bollywood produces over 800 films per year. 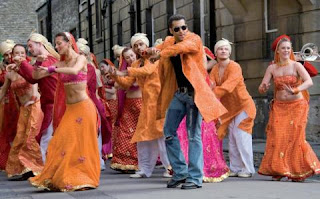 A typical dance scene from a Bollywood movie… color, flashiness, and lots of cheese. [Photo from Google Images.]

I saw about five Bollywood movies during my time in India and each time I went, I felt that it was a truly Indian experience. Melissa, my fellow co-worker in Korea and travel companion for 2 weeks in India, and I went to see “Badmaash Company,” a film about a group of friends who start a business that quickly becomes successful, due to their con-man tactics. Before the movie even started, we were prompted to rise from our seats with the rest of the audience for the Indian national anthem. While this wasn’t the case everywhere, I liked the patriotism that is associated with the national pastime of going to the cinema.

We soon learned that Bollywood films are long… very long. Of course, they have to be, what with their ridiculous dance numbers and tacky lovey-dovey song scenes taking place in awkward settings. Therefore, an intermission is always conveniently situated mid-movie for a chance to get to the bathroom and pick up a somosa or two to get through the second half, all the while attempting to understand the seemingly dubbed dialogue in a mix of languages. Most of the conversation in Bollywood movies is in Hindi with a mix of Indian English- a linguistic phenomenon that has become a common form of everyday conversation; the actors speak in Hindi and suddenly a word or two or even a sentence would be in English with “Oh my God” being a favorite expressions. Utilizing context clues is a must when watching these films, but they are still easy enough to understand. Despite the lengthiness and language barrier, I left the theater feeling uplifted by the happy endings and humming along with the closing song. 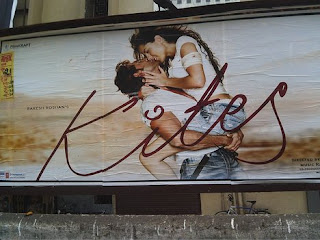 A billboard displaying an advertisement for “Kites,” one of the top Bollywood summer blockbusters. These ads were everywhere! [Photo from Google Images.]

These days, the music played in these films is just as important as the film itself. Turn on MTV India and you’ll find that the music videos are all themed along with the movies in which the songs are featured. The actors and actresses are also present and it’s not uncommon to see them in multiple movies released at the same time. In my opinion, these marketing tactics are genius. People get so hooked on the music that they can’t help but see the otherwise uninspiring movie, if only to hear the song, watch their favorite unibrowed Bollywood heartthrob, and dance along with the perfectly choreographed dance moves in their seats. Children even take dance lessons to refine their skills and dance clubs host Bollywood parties for enthusiastic adults to do the same. One of my favorite nights in India was when Melissa and I met with a casting recruiter who got us on the guestlist to Rock Bottom, a popular night club in the basement of Hotel Ramee Guestline Juhu.a My Indian host family’s daughter attended a summer camp where she took Bollywood dance lessons, an essential skill to have in India.

Even though Melissa had a fever and we were both suffering from E.Coli poisoning (undiagnosed at the time) we decided to be a bit wreckless and hop on the back of the motorcycles of two Indian guys we had just met for a night of Bollywood mayhem. [Don’t try this at home.] I started praying the rosary in my head that we wouldn’t be sold into the sex trade or end up dead in a ditch somewhere while we zoomed down the highway on a moonlit night. Just as I began to think that we would be fine, I heard a loud pow and turned around to see Melissa’s motorcycle had been run into by another bike. Fortunately, they were both fine and we continued on our journey.

Arriving at the club, I have to admit, was pretty cool. I was surprised to see Indian girls clothed in short, strapless dresses, a big no-no in any other Indian setting. Finally, after sipping down a $12 Cosmopolitan (mind you, this cost more than a night at some of our hotels), we hit the dance floor and the fun began. The English tunes soon changed to the Bollywood hits I had subconsciously come to know and love and soon enough, Melissa and I had been taught the standard moves for each song. As people began to pack in, I couldn’t help but laugh when I looked around. Every now and again, a Justin Beiber remix would sound and men in turbans with arms flailing in the air would start shouting in happiness and girls swayed in an American fashion. In never fails to amaze me how our world continues to become more global with each passing day. 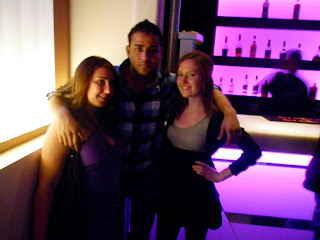 Melissa and I at Rock Bottom with one of our new friends, who, fortunately for us turned out not to be a serial killer.

I was a bit upset that we didn’t run into Shahid Kapoor or Kareena Kapoor, but was excited when the guys agreed to take us to see the apartment of Shahrukh Khan, THE top dog of Bollywood films, in one of the ritziest neighborhoods of Mumbai. He is so adored by his fans that he apparently goes out on his balcony each Sunday to wave to those who have surrounded his house just to catch a glimpse of his highness. Around 4AM, we found ourselves driving through the Dharavi slums, made famous in Slumdog Millionaire. Hundreds of people- babies and elderly alike- were sprawled out sleeping on the streets, either homeless or too hot to be in their tin-roofed homes. As our night of excitement came to end and we drove down Chowpatty Beach, I couldn’t help but think that perhaps the glitz and glamour of an almost unrealistic India portrayed by Bollywood is a mental vacation from the gloomy side of the country for those who can afford it. 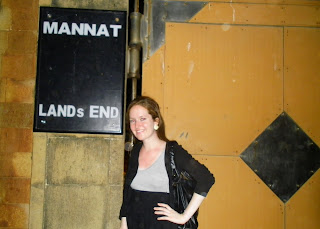 Me at Lands End, a ritzy neighborhood and home of Shahrukh Khan, the king of Bollywood.

Whatever role it plays in the country, Bollywood continues to captivate both Indians and non-Indians alike. It will no doubt continue to thrive and be the source of coffee house chat, tabloid gossip, and an economic boom throughout the nation. That, and at the top of both my Indian memories and iPod playlists, of course.