Japan has always been synonymous with all things technological. From the nation’s numerous electronic companies to their futuristic skylines, there is no doubt that Japan is one of the leading countries of the world in technological advancement. Of course this is common knowledge, but one never fully comprehends this fact until he or she has visited a Japanese city. When one does visit Japan, they find themselves in a land run and operated by machines.

As soon as I arrived in Fukuoka, I had to get to the Korean Consulate to drop off my visa application. They had just closed for lunch so I walked across the street to Hawks Town Mall, a new-ish shopping complex near the Yahoo! Japan Dome. I grabbed a quick bite to eat and tried desperately to avoid the adorable boutiques, as I knew I had no room in my already overweight suitcase. Wandering aimlessly, I found myself in an arcade. It must be noted here that Japanese arcades are of a totally different caliber than their Western counterparts. They are not just an outlet of entertainment here. Instead, they are a way of life. 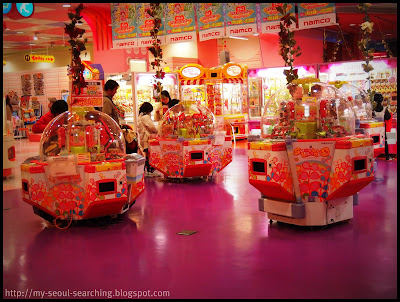 Japanese arcades are flashier than the flashiest of Vegas casinos. They are loud, they are bright, they overload the senses. They are frequented not only by children, but by adults, too. Don’t expect to find Pacman or pinball here; they are a thing of the past. In Japanese arcades, the game consoles and machines seem to have been salvaged from deserted spaceships. The claw machines especially threw me, as the claws were oversized and robotic. Many of the potential prizes were food items and seemed to be worth less than what it cost to play. Still, people lined up to try their luck in winning a pack of gum or box of character cookies. Remember those arcade games in which you enter a coin in hopes that your coin will push the other coins over the ledge? Those things are monstrous in Japan and often have all sorts of crazy things happening and moving around in their centers. 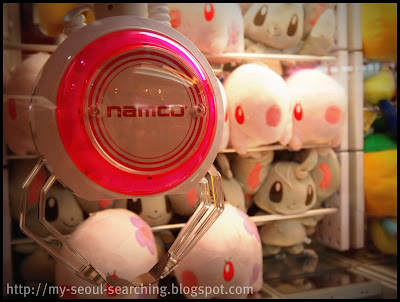 Not your grandmaw’s claw machine. 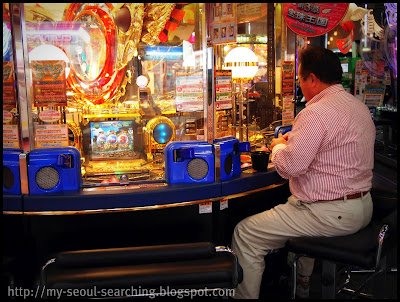 Japanese arcades are not just for kids.

Pachinko games are also popular. These machines can be found all over Japan. On observation, they seem like slot machines but use tiny silver balls much like old slot machines used tokens or coins. Of course no Japanese arcade would be complete without a few Dance, Dance, Revolution machines and some purikura booths. 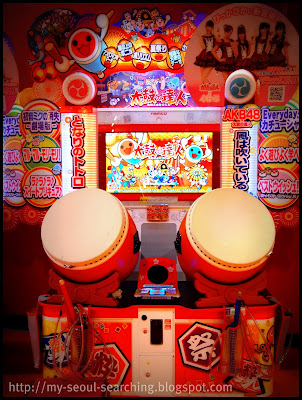 This game was pretty much the Japanese version of Rock Band. 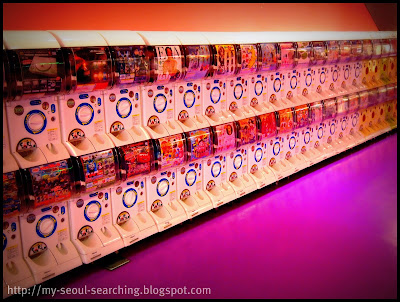 Check out what the gumball machine has evolved into.

Another type of machine commonly used in Japan is the vending machine. One type of vending machine is used at many restaurants. Upon entering, one can place his or her money in the machine, chose an item from the menu, and receive a ticket to give to the waiter. Some machines deliver the actual food after it is prepared in the kitchen. Cigarette and coffee vending machines can be found in just about any public space in Japan. Fortunately, I never came across any of those weird used panty vending machines that Japan is famous for, but I also heard that those have been outlawed. 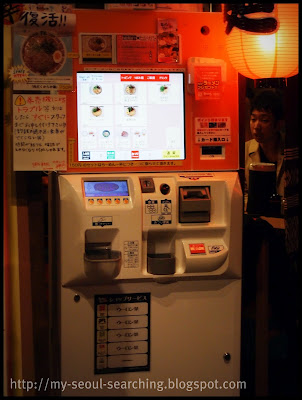 Ordering your meal through a machine has become the norm in many Japanese restaurants, especially ramen joints, like this one at Ramen Stadium in Fukuoka.
I couldn’t talk about Japanese machines without mentioning the toilets. Walk into most Japanese bathrooms and feel as if you’ve been transported into the future. One of the great things about Japanese bathrooms on cold days is the heated seats, which are also common in Korea. Something I did not expect when sitting down was a voice welcoming me and what I imagined was a well-wishing during my bathroom experience. Just a few seconds after sitting down, a running water sound signaled on, so as to disguise any other less-than-pleasant bathroom noises. Flushing methods vary from toilet to toilet, so there’s usually some signage posted on how to operate specific machines. It seems that the sensor is becoming popular in which one waves his or her hand across a black screen on the wall to start the flush. The Japanese bathroom is no doubt an experience in itself.
Some of the greatest sites of Japan are ancient temples, shrines, even Mt. Fuji. Still, no trip to Japan is complete without experiencing the high-tech side of the country. I can’t be certain, but I have a pretty good hunch that Japanese bathroom technology is the next big thing that will be trending throughout the world… soon enough. Come to think of it, I can’t think of anyone who wouldn’t want a talking toilet…
2
Previous Post
Next Post