It’s easy to be hesitant about trying new foods in Japan. For one, very little English is spoken and there is rarely an English menu available. Furthermore, many Japanese dishes are unknown in the West. So, even when there are picture menus available, the foreign diner most likely has no clue as to what he or she is looking at. I’ll admit that I spent quite a bit of time at McDonald’s during my first trip to Japan, mostly because my first attempt at ‘point and order’ ended with my being queasy at the mystery meal I consumed. I wasn’t going to let that happen this time. I was eager to experience Japan one spoonful (or chopstickful) at a time.

Most Japanese restaurants seem to be set up in similar ways. As far as the interior is concerned, wood elements are often used. Colorful sake bottles line the shelves. The design is simple and clean. Dining in Japan is also entertaining. Upon entering a restaurant, waiters often shout out a welcome in unison. At first, it can be a bit uncomfortable in the way that waiters singing “Happy Birthday” at family dining chains in the States can be. It’s easy to get used to, though, and when you do, it’s kinda fun. 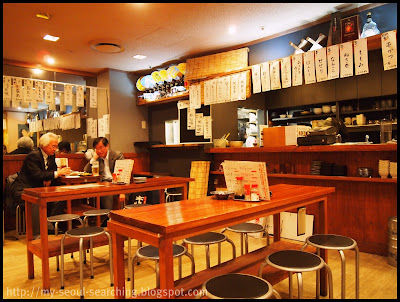 During my four days in Fukuoka, I made sure to try some specific dishes. Soba, tempura vegetables and seafood, gyoza, and donburi were a few things I dined on. They were good, but a few others stuck out as the highlight of my culinary adventure.

Friday was freezing and I needed nothing more than a hot bowl of noodles to warm me up. I got excited when I found an udon shop in Hakata Station. I motioned for the waiter to follow me outside the restaurant so I could show him what I wanted on the posted photo menu. He happily took my order and soon enough, a piping hot bowl of chewy udon noodles in a broth was brought to my table. I had become accustomed to eating udon in Korea but nothing compared to this. In addition to the noodles was a large lightly fried shrimp, a handful of green onions, and pieces of tempura batter. The shrimp was delicious but what really made the dish great was the tempura. The little morsels of crunchiness gave the noodles a perfect texture that left me wanting more. 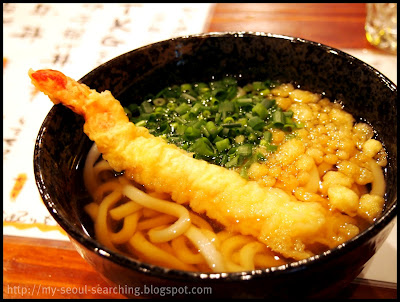 The best udon I’ve ever had. Love those tempura bites!

Unfortunately, ramen is a food that is often thought of as an instant cup-of-noodles one eats when pressed for time or low on cash. What many foreigners do not realize is that the authentic stuff is delicious and memorable, and most certainly never packaged in a plastic wrapper.

I headed to Ramen Stadium at the Canal City shopping complex to try my first bowl. Ramen Stadium is a cool concept. The venue is made up of various ramen shops all under one roof. Each shop is famous for a certain style of ramen and while the noodles are the main draw, dishes like edamame and gyoza (fried dumplings) are also available. It was just opening when I arrived and I immediately flocked to the shop with the biggest line. I ordered the standard ramen (still not quite sure what kind) on the ticket machine outside and was quickly welcomed and seated at the bar. My food promptly arrived as the busy cooks moved around furiously in the kitchen. A super-sized bowl of small, hard-ish noodles were delivered in a thick, cloudy broth of deliciousness. Again, green onions were present, as were two big hunks of pork. The pork was ridiculously tender and had me wishing I had ordered an extra serving of meat. I was more than pleased with my ramen experience but there was still one thing left I had to eat. 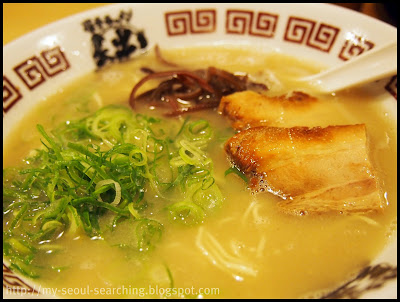 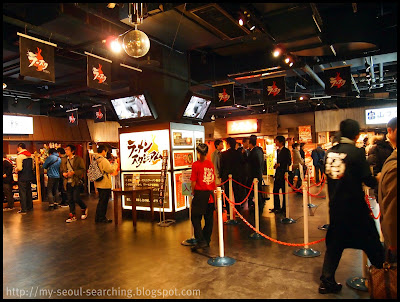 When I was in Tokyo, I had sushi. Salmon sashimi to be exact. It was delicate and tasted like candy. But a few pieces of it set me back about $20. So, when the receptionist at my hostel recommended a conveyor belt joint at Yodobashi-Hakata electronics store that offered each plate for 105 yen, I was quickly on my way. I had to be put on a waiting list, but it was well worth it. I was in sushi heaven as each piece of fish passed my eyes on the never ending mechanical belt. At first I was confused about how to prepare the essential condiments but soon found that packets of wasabi were in baskets on the conveyor belt. After mixing one with some soy sauce, making a cup of hot green tea, and ordering a Suntory beer, I was set. All attempts at pacing myself were unsuccessful as I scooped up plates of sashimi and rolls, most of which I didn’t recognize, but still found delicious. The beer paired fantastically with the fish and by the time I was finally able to put my chopsticks down, I was in a sushi-induced trance. 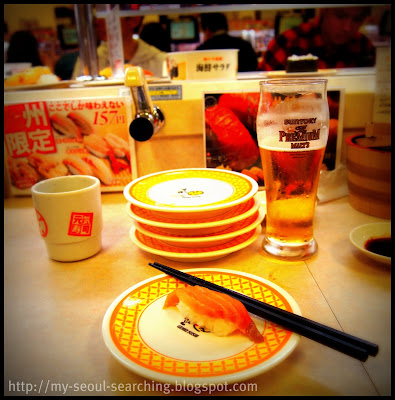 Just getting started on my sushi frenzy.

With the last essential meal crossed off my to-eat list, my gastronomic journey had ended. At least for a while. If I have my way, I’ll be back for seconds soon.