By Mimsie Ladner on Tuesday, May 21, 2013
It was about a decade ago when the coffee craze hit Seoul.  Although the caffeinated beverage had been introduced a century earlier, it was often considered a luxury product and was not consumed by common folk until the sixties.  The industry further transformed, however, in 1999 when Starbucks entered the Korean market.  It didn’t take long for profiteers to follow suit and before anyone could say “Double Ristretto Venti Non-fat Organic Mocha Frappuccino” the Korean capital had become overrun with a number of domestic and international coffee chains.

Whether the success of the Korean coffee industry was catalyzed by Western cultural influences (read: F•R•I•E•N•D•S) or the nation’s need for caffeine (after all, they do work the longest hours in the world), the coffee obsession is here to stay.  Yet, with more than 12,000 coffee shops in a country about the same size as Pennsylvania, there’s no doubt that competition is cut throat.  In order to succeed, cafes must work hard to ensure that they stand out from the rest; methods include having a unique concept, producing high quality coffee, or offering exceptional service.

Still, in a country where change is omnipresent and trends pass as quickly as they came, coffee addicts are often left desiring something new from the industry.

Enter Bici Coffee, a Seoul-based business that promises a fresh and exciting coffee experience to those who are “tired” of the city’s mundane and often overcrowded cafes. 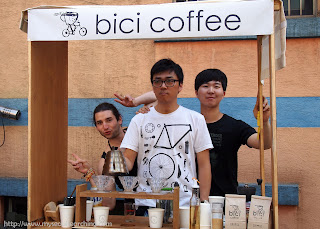 Earlier this month, I headed out to Hongdae, Seoul’s youth district, to get a taste of Bici Coffee and chat with Jaehun “Michael” Lee, the brains behind the eco-friendly idea.

Passing through groups of tattooed twenty-somethings far cooler than I at 50 Seoul, a pop-up flea market of used clothing, hand crafted accessories, and homemade foods, I found it easy to spot Lee’s business.  Bici Coffee, as its name implies, is part bicycle, part coffee bar, and entirely genius.  I was immediately impressed and was not alone; swarms of intrigued shoppers gathered around the bicycle “cafe” for a closer look.

Lee stood behind the counter with a grinder in hand, intently grating a single portion of aromatic beans into a luxuriant powder.  He greeted me and introduced me to his team, J on Grin and Anthony Balzio, both coffee aficionados, and his wife Jihyeon Eo, the designer of the portable stall. 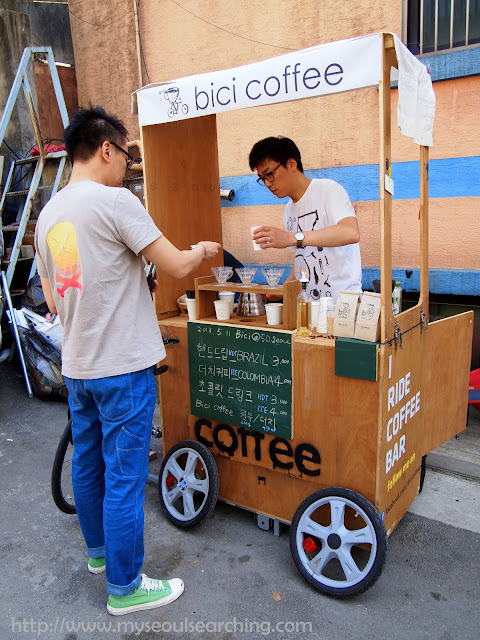 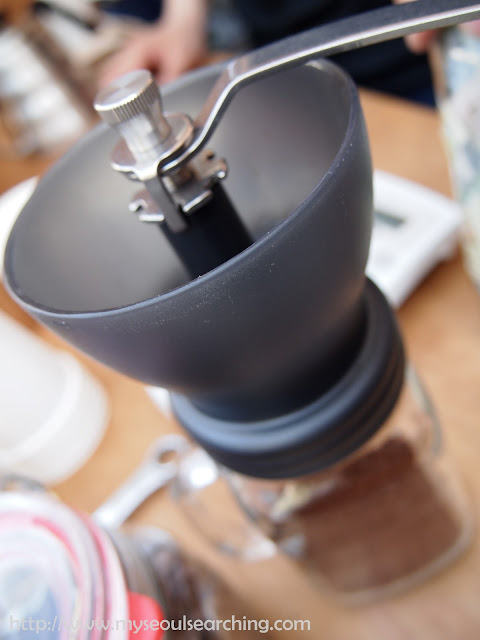 Lee, who previously worked in entertainment marketing, was inspired to start a bicycle coffee bar after seeing similar ones in other countries.  In October of 2012, he began planning and taking his bike out for trial runs.  Soon after, he met the man who would become Bici Coffee’s resident roaster.  J on Grin, who once worked for Caffe Bene, fell in love with the art of roasting coffee beans and after extensive study, began selling beans from the back of a truck.  By chance, he happened upon Bici Coffee, expressed his interest, befriended Lee, and quickly became an imperative member of the Bici family.

The team frequents farmers’ markets like the one in Gwanghwamun as well as Marche on weekends and can be found near Hongik University on weekdays.  Bici offers a selection of high quality coffee, including hand drip and cold brew, as well as hot chocolate.  Beans are imported from Columbia and Brazil and are freshly roasted before each ride.  Lee was eager to point out that the beans being sold at the market were roasted the day before, noting that, “Freshness is most important.” 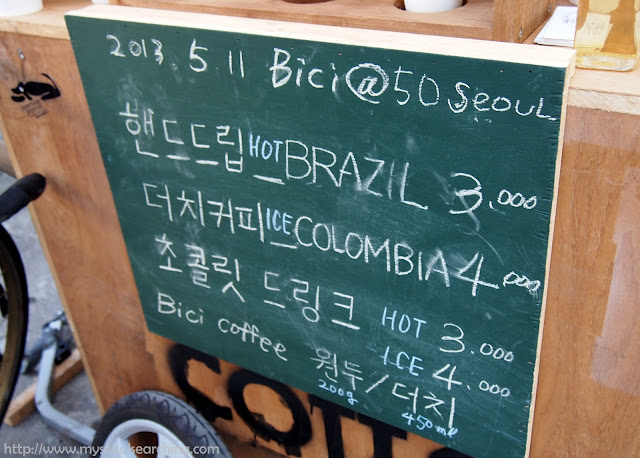 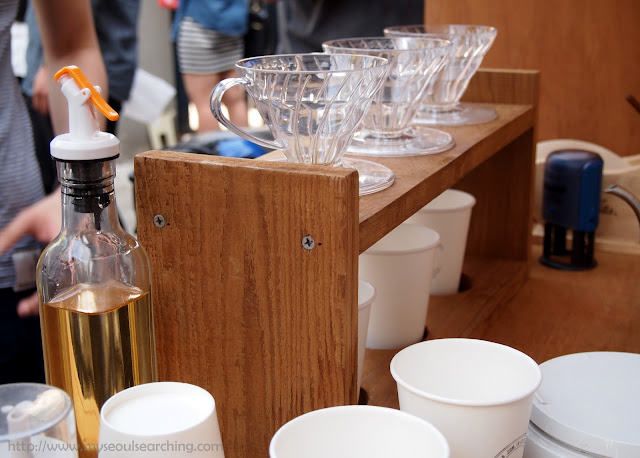 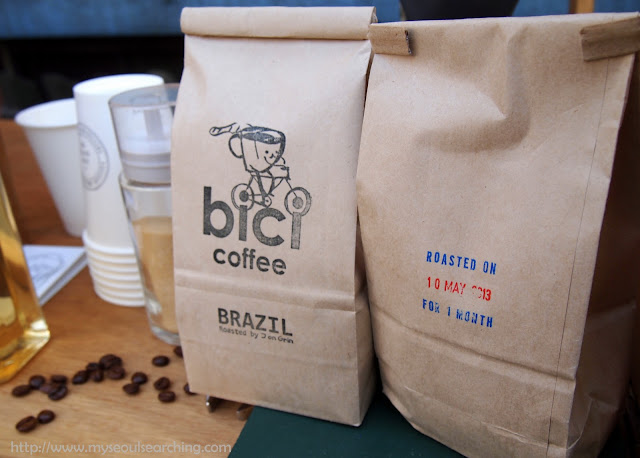 As Lee and his team continued serving intrigued customers, I couldn’t help but notice the surprised looks on their faces as they watched Lee, J on Grin, and Balzio personally hand drip their beverages.  The novelty of the experience is no doubt a big draw, as is the environment.  “The taste of the coffee depends on the atmosphere,” Lee remarked.  “They like it because it’s fun.”

Not to mention flavorful.  I ordered a cold brew which was served over a few chunks of ice, a perfect option for the warm afternoon.  It was strong and bitter- flavors Koreans favor- and gave me the caffeine buzz I was looking for.

Although Lee and Jon Grin hope to one day open a permanent coffee shop, the two friends have plans to continue to develop Bici to share their passion for coffee and step up the competition in the already fierce industry.

“In order to be the last one standing,” Lee remarks, “a coffee shop must be the best.  To be the best, there must be a story.  I want to make a story.”

Even though it’s only in the beginning stages, Bici Coffee’s story is already brewing into one of success. 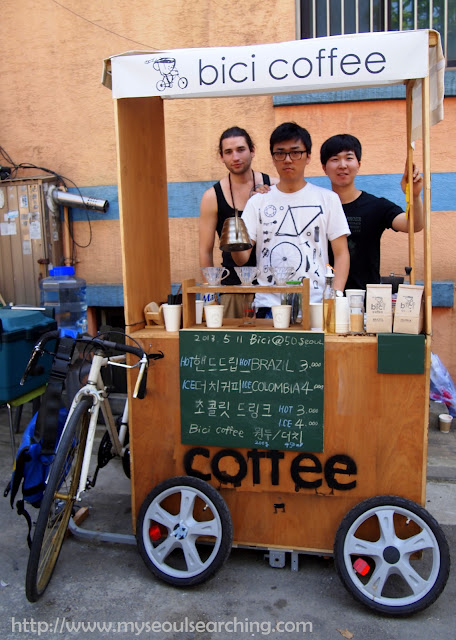 The team of Bici Coffee (from left to right: Anthony Balzio, Jaehun Lee, and J on Grin)

For more information about Bici Coffee, including where and when you can find their bicycle coffee bar, follow them on Facebook and on Tumblr.  They will happily respond to your comments and inquiries in English.

How to Get SHEETFACED with Korean Sheet Masks