The Buzz on Seoul’s Urban Beekeepers

By Mimsie Ladner on Monday, May 6, 2013
On a warm spring afternoon, Jin Park, a 32 year old Korean citizen, guides me to our destination on Nodeul-seom, a seemingly unremarkable island smack dab in the middle of Seoul’s Han River.  Park looks like any other guy his age, donned in cargo pants and a navy hoodie.

Those passing him probably suspect he designs software, works for a company, or, perhaps is still even a student.  It’s not until we reach the far end of the island that Park reveals he is quite different than the rest of his city-dwelling peers.  As he takes off his baseball cap and replaces it with a veiled hat, he makes it evident that there is a new subculture emerging in the Korean capital: urban beekeeping. 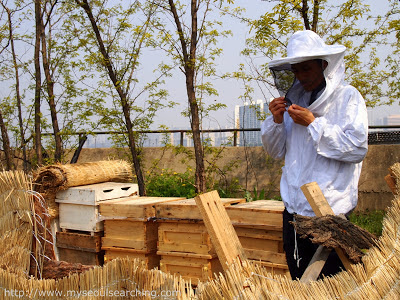 Thirty-two year old Park Jin puts on a hooded suit in preparation for a “hive check-up”.

It wasn’t my first time seeing Nodeul-seom.  I had frequently crossed the Hangang Bridge while living in Sangdo-dong and often wondered what this small island surrounded by high-rises was used for.

As it turns out, Nodeul-seom is a government-funded, green-friendly initiative that is part free farm, part sledding grounds, depending on the season.  Unfortunately, it seems that most people are unaware of its existence, as it is not being used as much as the government assumed it would be.

Others might not blame its lack of success on unawareness but rather on disinterest, suggesting residents of the city would rather spend their time in the comfort of their modern living rooms or shopping in the capital’s many department stores.

Still, on this spring day, the faint sound of a collective buzzing adds a sense of hope to the Nodeul-seom initiative.

The urban beekeeping trend that has taken the world by storm is now taking hold in Korea, and Jin Park and his fellow members of Urban Bees Seoul, a recently established ecological cooperative, are doing their part to ensure that it is properly developed.  Following the lead of the Seoul Metropolitan City Government’s implementation of a hive site last year on the roof of Seoul City Hall, UBS is working hard to maintain three additional sites, including the one on Nodeul-seom.

I joined Park during the co-op’s most recent weekly “hive check-up.”

Facing my fear of bees (most likely induced by watching My Girl too many times), I ease closer and closer to the site to get a better view of the hive.

Park works calmly, using fluid and slow movements to examine the hives for wax, pollen, and honey and to remove drone (male) eggs to increase the productivity of the worker (female) honeybees.  Although an increased productivity yields more honey, this is not the objective of Urban Bees Seoul.  In fact, Park tells me that because there are currently only a few sites, honey production is still low and they are not yet selling it commercially.

“We eat the honey and share it with our friends and families.  We also have plans to use it to make honey beer and honey ice cream,” Park informs me.

In addition to culinary enterprises, Urban Bees Seoul offers candle-making classes using wax produced by their urban bees.  They are also generating a great interest in urban beekeeping through their educational classes in which they inform the general public about the lives of bees, the outstanding importance of honeybees to our world, and the how-to’s of starting an urban hive. 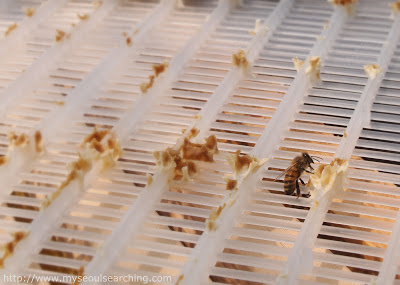 Urban Bees Seoul uses the wax produced by their honeybees in candle-making classes, which are generating interest in urban agriculture amongst younger generations.

Even more interesting than the projects themselves are the people getting involved.  The majority of participants, like Park, are young twenty- and thirty-somethings eager to bring a bit of the Korean countryside to the city.

Park, born in a small town in Jeollabuk Province, grew up playing on the farms of his friends and neighbors.  Shortly after moving to Seoul to commence his studies at Chung-Ang University, homesickness for the comforts of the countryside set in.  He began to seek new ways of incorporating rural culture into his new city life.  Now, he works as a horticultural specialist, active in the movement of urban farming and beekeeping.

“Many people in [Seoul] want a rural life, but they have to work in the city.  So, this life is another way,” Park states as he carefully closes a hive after a successful checkup, ignoring the sting of a stray bee. “Urban farming and urban beekeeping refresh our lives… and it’s fun.” 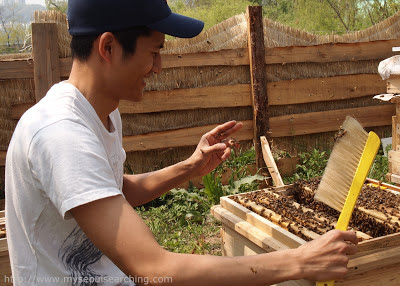 Park works comfortably and happily in the company of honeybees.

There has been recent concern, however, about the future of Korea’s agricultural industry as young Koreans continue to leave behind their small towns for corporate jobs and better economical opportunities in bigger cities.

Still, these worries seem to be unwarranted as younger generations are becoming interested in these necessary urban movements.  Korea can rest assured knowing that it’s future is in good hands, as Park and the rest of Urban Bees Seoul continue to create a “buzz” about urban agriculture and work diligently to ensure than urban beekeeping flourishes on the Korean peninsula.

Many thanks to Jin Park and Urban Bees Seoul for inviting me to their meeting and giving me a glimpse into this fascinating cultural movement.

Words and pictures by Mimsie Ladner of Seoul Searching.