They say that bad things happen in threes. I don’t know who “they” is or how valid this superstition may be, but it seems that it has proved quite true for South Korea recently. As if teaching uncontrollable, kicking, screaming, hair-snipping orphans (not to sound insensitive) was not enough for me, there has been a domino-effect of tragedy throughout the country this week.

This past weekend, South Korea’s former president, Roh Moo-hyun, killed himself by jumping off a mountainside. Roh, from what I understand, was an incredibly respected leader who made many bold and positive changes not only throughout his presidency, but also his life. He fought for human rights and for the dispersion of wealth, in addition to making decisions regarding North Korea with a reconcilatory approach. Though he implemented policy with a focus on anti-corruption, his legacy became tarnished when he became involved in a bribery investigation. It is believed that his guilt led him to suicide. Despite this, he was certainly loved by his constiutents; there’s something like 150 alters spread throughout the country in memorium. Walking around in Gangnam the other night, I found myself moved by the hundreds of people waiting in lines with candles and flowers to pay their respects.

Soon after Roh’s death, Kim Jong Il offered his condolances to Roh’s wife. This public statement came as a shock to many, as sympathy from Kim to any South Korean is a rarity. It was an even bigger shock when North Korea announced a confirmation of a sucessful nuclear test just a short six hours later. Asshole. Things didn’t get much better as the North continued to fire missles, make threats to South Korea, and continue to cook up some plutonium in their newly reactivated nuclear plant over the following days. Not many here seem to be concerned, as this is quite possibly NK’s attempt to get more money from the States, but I have to admit- it makes me a bit nervous. I did register with the embassy as soon as I heard the news, so in the case something does happen, my ass is outta here.

In the meantime, swine flu continues to spread throughout Korea and foreigners have begun to become somewhat feared by the country’s citizens. Apparently, 22 of the 32 swine flu cases were in foreign teachers. Many hagwons and schools have closed, and at my school particularly, we’ve had many kindy classes cancel. Our school is requiring that we have our temperature checked daily by the school nurse so that we may be admitted to the hospital and be reported if we exhibit any symptoms of swine flu. We’ve also been instructed to avoid crowds, which is quite impossible living in a city of millions of people. It could be worse, though, as a couple dozen foreign teachers have been quarentined in the southern part of Korea after being exposed to the illness. Some are even keeping blogs while they are being secluded from the rest of the world, which I have to admit are pretty funny. I’m just hoping this quarentine nonsense doesn’t make its way to Seoul English Village.

Needless to say, I’ve been including disease prevention education into my lessons with the children, as it’s not so common for people to cover their mouths when coughing or sneezing and germacide soap is rarely seen in bathrooms, including the ones at my school. And they wonder why they are the most vulnerable to catching colds… in the entire world! Still, it’s been interesting to be in the middle of all this, and it will surely provide insight for future public health jobs. I did buy a facemask, being in Asia and all, though moreso for entertainment purposes. It is ready in case I should happen to need it…. 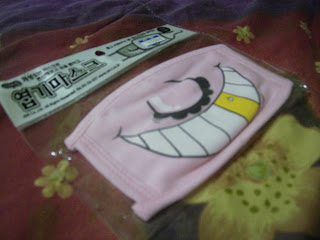 I haven’t actually seen anyone wearing these face masks, but have found a variety of some really funny ones, including a mouth with a pacifier and a disgustingly runny nose. Oh, Asia…
0
Previous Post
Next Post