The 2010 Winter Olympics in Vancouver are in full swing and for the first time in my life, I’m keeping up with them. As much as I hate to admit it, however, I couldn’t tell you a single thing about any of my own country’s athletes. Sure, I’ve picked up on a name here and there but as far as hometown, family life, or even past achievements, they are all strangers. Therefore, it may seem odd that I’m much more in the know when it comes to the Korean athletes competing in the games, with one figure skater in particular: Kim Yuna.

Within the first few weeks of my being in Seoul, I was well aware of the 19 year old athlete idolized by her fellow Koreans. Whether I was teaching newspaper or talk show class, my students wanted to talk and write about her, some even wanting to act out interviews pretending to be her. Koreans of all ages really worship her, and for good reasons. Yuna began to rack up the achievements early on in her career and has since established herself as one of, if not the best, figure skaters in the world, instilling a huge sense of pride in the people of Korea. Before the Olympics even started, she was picked as a favorite for the gold. In today’s competition, she beat the world record for points earned (with a whopping 78.50)in the short program with her incredible ‘Bond girl’ performance [see video]. I was amazed at how she handled the pressure of having to immediately follow Japan’s Mao Asada, who skated a nearly flawless program. Yuna had what it took to beat her, though, and I’m thankful she did; it would not be a good day in Korea if she had been beaten by the Japanese. Hours later, I walked into town to Starbucks (where I’m currently blogging) and couldn’t help but notice every TV I passed was replaying the footage from the day. 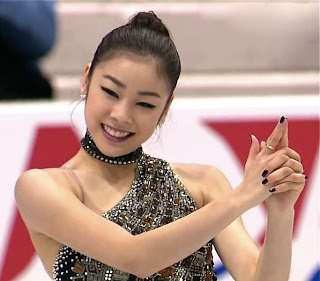 Kim Yuna strikes her end pose as a bond girl in her record-breaking short program performance at the 2010 Winter Olympics. [Retrieved from Google Images.]

I told my class the good news after lunch and they were ecstatic, jumping up and down screaming. They then began to tell me her life story. I was a bit surprised at how much these kids knew about her, but then again, who doesn’t know about the “Ice Queen” as she is so often referred to here. In 2009, Forbes Korea named her the number one celebrity in South Korea, with professionalism, popularity, income and influence taken into consideration. In 2008 AND 2009, she was voted as Person of the Year by a Korea Times survey; runners-up included Barack Obama, singer and producer JYP (my self-proclaimed BFF who I drunkenly took tequilla shots and pranced around with one night in Hongdae..but that’s a different story), and South Korea’s own president, Lee Myung–Bak. 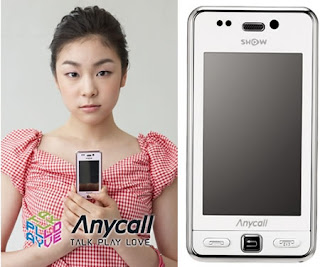 Kim Yuna poses in an advertisement for the “Yu-Na Haptic,” a new Samsung phone model. [Retrieved from Google Images.] 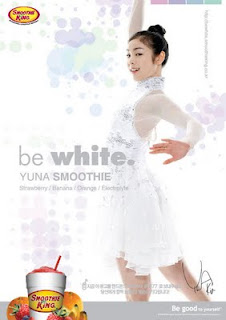 Here, Yuna endorses the Yuna Smoothie at Smoothie King. [Retrieved from Google Images.]
Her popularity has led not only to a rockstar status, but also to an endless number of endorsements; her contracts alone are worth more than $2.6 million. Similar to Michael Jordan in America (think 1990s), Kim Yuna’s face is everywhere: billboards for cars to commercials for refrigerators to life-size cardboard cutouts at Smoothie King. She even had a cell phone model named after her: Samsung’s “Yu-Na Haptic” which can be seen advertised on every block of the city. It’s no wonder she needs bodyguards when she is in Korea… her fan base is ridiculously large and very devoted. And they’re all counting on her to bring home Korea’s first gold medal in figure skating. I’m thinking the chances are good. Despite the end result, she will no doubt continue to be cherished by the nation that stands behind her.
Sorry, America. I’m with Korea on this one. KIM YUNA FIGHTING!
1
Previous Post
Next Post

My K-Style Makeover at Jenny House in Cheongdam-dong