Never have I been an avid television watcher. Sure, I’ve had my bouts of Grey’s Anatomy addictiveness here and there, but I have never seen an entire season of any show from start to finish. That is, until now.

A short time ago, I wrote that I had been enjoying Korean television as I got ready for work in the mornings. A particular show caught my attention and after seeing and becoming completely hooked after a few episodes, I decided to try to find it on the Internet, preferably with English subtitles so I could fully understand it. After plugging in some keywords on Google, I located it on MySoju. Since that day, my life has revolved around 꽃보다 남자 or “Boys Before Flowers.” While I am still trying to analyze the significance of the incredibly popular Korean drama’s title, I know one thing is for certain: this is the best damn TV show I’ve ever seen.

The show, based on a Japanese manga series, follows the life of Jan Di, your average middle class girl. Her extremely comical family owns a dry cleaning store near Shinhwa High School, a preparatory school that only accepts students from the richest and most powerful families of Korea. As Jan Di is delivering a student’s clothes one day, she inadvertently saves a suicidal boy attempting to jump off a building. Fearing bad publicity, the president of Shinhwa admits her to the school on a swimming scholarship. She soon meets F4, the four richest and most spoiled boys of Shinhwa. Despite their arrogance and cruelty toward the student body, everyone adores them. Jan Di tries to avoid confrontation with the F4 at all cost because she has been told what happens to those that stand against them: public humiliation and societal torture. Being golden-hearted Jan Di, however, she stands up to their leader, Gu Jun Pyo, when her friend accidentally gets ice cream on his Florentine leather shoes. Once becoming involved with the F4, her life soon becomes a whirlwind of drama: love triangles, paparazzi chases, jet setting, and scandal.
There are only 25 episodes in the series, each lasting about an hour. While this may seem very short for a TV show, each episode is action packed. In one alone, a character may have a close encounter with death three different times, a friendship will end, two romantic relationships will begin, and multiple storylines will finally converge. Each PG-rated episode leaves the viewer full of emotion (I’ve quite literally sobbed in particular episodes) highly anticipating the next with a strong cliffhanger. I’m quite certain that my blood pressure has raised 20 points, at least, since I watched the first episode. In addition, the actresses and actors are not only pretty faces- they are extremely talented and make the slightly unrealistic plot seem believable. They are, no doubt, the reason why “Boys Before Flowers” has been such a success in Korea, especially among the female population.
While I did not notice before the show, these guys are everywhere. For instance, walking through Meyongdong last week, I snapped pictures whenever I saw them. In just ten minutes, I spotted lifesize cardboard cutouts or posters of their devastatingly handsome faces in shoe stores, restaurant chains, convienence stores, retail clothing stores, cell phone kiosks, and even cosmetic stores. Three of the F4 guys each have contracts with different beauty stores. I found this to be extremely strange at first. Why in the world would stores selling the likes of makeup, perfume, and hand creme use males as their primary advertisers? But then, as I started to think, I came up with most plausible reason I could: if the boys’ beauty is any indication of the effectiveness of their products, I’d want to use those products, too. Their perfectly chiseled noses and luscious lips have led many to believe that each actor underwent plastic surgery, which is so common in Korea. In fact, only one actress admitted to having surgical cosmetic alterations; ironically, her character in the story was publicly humiliated for doing so in the show. 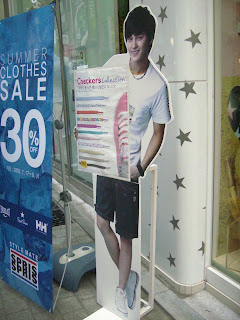 Kim Bum, who plays So Yi–jung, the “Cassanova” of the F4 models for a shoe store. He is sooooo adorable. 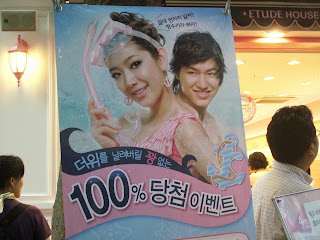 Lee Min Ho, aka Gu Jun Pyo, is the face of Etude House, a popular cosmetics store, on posters and TV. 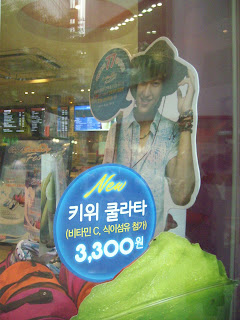 Min Ho again in cardboard cutout form in the window of Dunkin Donuts. He also stars in his own commercial. 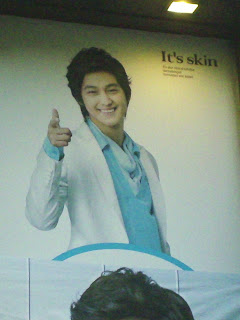 Kim Bum on the facade of It’s Skin, another popular cosmetics store. 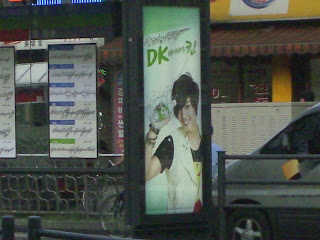 Kim Doo Young advertises for DK soda at a bus stop in Suyu. 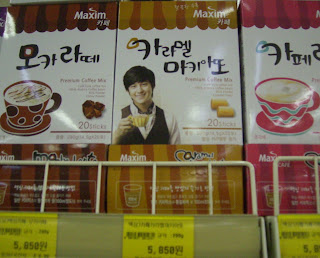 F4 even has contracts with food products, such as this coffee brand.

In any case, I have a huge fat crush on Gu Jun Pyo, played by Lee Min Ho. This week, after seeing my Lee Min Ho cell phone charm (don’t judge me), one of my day students who shares the same love for him brought me pages of stickers of his face as well as trading cards of the other characters. Another student ran up to me and though slightly out of breath she informed me she had very important news: “Teacher, Gu Jun Pyo was at Carribean Bay this weekend! You should go next weekend to look for him!” I even use examples from the show to help the students understand vocabulary words: “Attitude. When Gu Jun Pyo started to like Jan Di, his entire attitude changed. He was no longer so mean to everyone.” “Ooooooohh,” the students reply.

It’s especially fun to talk with the kids and my Korean co-workers about the show- they love that I love it. I’ve also started to convert my friends, and they have quickly become just as obsessed. It’s slightly scary that we squeal like schoolgirls when we talk about the unfolding events and crazy drama on the show. Besides entertainment purposes, watching BBF has been a great way to learn even more about the Korean culture and improve my vocabulary. It’s also pretty cool to see scenes occur in places where I have been: the Seoul Art Museum, the teddy bear museum, Seoul Tower, and the topic of a recent post: the Seoul Zoo. One of the most adorable scenes took place in the zoo and some of the areas in the pictures I posted can been seen here. See the clip.

I have finished watching 22 of the 25 episodes. I do not know what I will do with my life when I’ve watched #25. I think the withdrawals will be worse than those I experienced after finishing the Twilight series. In the meantime, I’m looking forward to potentially meeting Kim Doo Young next weekend at the Korean Wave Festival. If this happens, I may, for the first time in a long time, wet my pants.