Welcome to the Jungle

By Mimsie Ladner on Wednesday, September 23, 2009
I had a jungle trekking tour planned for Wednesday, so it was yet another early morning. This one was made through the same website, but I later learned that it would have been just as easy for me to book any tour I wanted once I arrived in Chiang Mai, as tour organizations are set up on every block (quite literally) throughout Thailand.
I boarded the van and soon realized that I was the only native English speaker, let alone one of the two single people. So, when our tour guide, Noi, offered the spot in the front, I jumped at the opportunity. Seeing Thailand from the front seat of a vehicle, on the opposite side of what I’m used to, mind you, was nerve racking to say the least. But, being the cool guy that he was, Noi pretty much gave me a personal tour of Chiang Mai as we drove through it. He told me about his wife and his kids and was eager to answer all my questions about Thailand; by the time we arrived to our first destination, I felt like I had found a new BFF.
It seemed shorter, but the Mae Wang elephant camp was only about an hour and a half from Chiang Mai, set in the beautiful rolling mountains. I was in awe of how beautiful everything was, captivated by the infinate shades of green that painted the Thai landscape. As soon we stepped out the van, we were welcomed by Thai natives and two very large, very hungry elephants chowing down on some greens. We were then led across a terrifying, wobbly bridge made from palms and rope, set high above a quickly flowing river. We then boarded our transportation (the elephants, of course) and settled into our somewhat ghetto chairs, known as howdahs, only supported by a single rope. In my head, I knew I’d be the one to fall out of the damn thing, so I held on for dear life. Right from the beginning, I felt like a female version of Indiana Jones, trekking through the wild of Southeast Asia. All I needed was the hat. And maybe a big boulder chasing after me. I don’t know if I’m alone in doing this type of thing, but I never seem to grow out of playing pretend, if only in my mind. 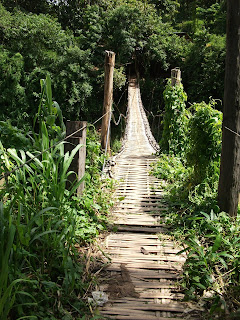 The key was to not look down.
I rode with a thirty-something year old Israeli girl who had no problem sharing a joint of God-knows-what rolled in a banana leaf with our mahout, our elephant guide. Throughout the duration of the one and a half hours on the elephant, they were both laughing to themselves and I had to laugh along, as I knew this day would make for some good stories. 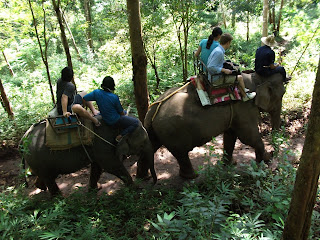 Some of my tourmates on their elephants.

I don’t know how, but our elephants made it up and down the mountains, in addition to across flatter terrain; no wonder the role of the elephant was so important in Thai history. It could have been the fact that I was on an elephant, in the middle of a lush jungle, listening to an assumingly high local chant a Thai song, but this was the first time in 5 months that I truly felt like I was in Asia. Or, at least the Asia I had painted in my mind over time. Perhaps our elephant was inhaling whatever homeboy and homegirl were smoking, too, because he was especially hungrier than the other elephants and often trailed behind them, grabbing a snack here and there. We crossed a river and were assisted off the gentle giants. We were then able to hand-feed them bananas, which proved to be a very unique and enjoyable experience. 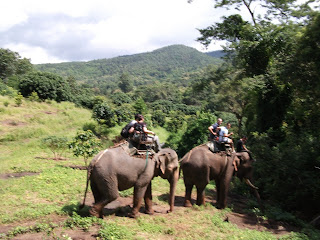 It was only a few minutes’ drive to the bank where we boarded rafts made of long bamboo sticks. There were four people to a raft along with the “captain” who maneuvered our vessel with, what else… a bamboo stick. At this point, the weather was ridiculously hot and the searing sun was having no mercy on us. I was happy that the water flowed freely through the tied-together bamboo. The water level was very high, due to the recent rainfall. I was glad that I hadn’t brought my camera I had purchased the night before at the night bazaar, as we were, at one point, submerged up to our chests. We went over mild rapids and under the canopies of low hanging trees along the banks of the river. We also passed a family of elephants slapping mud on themselves, also trying to cool down. This leg of the tour was sooooo relaxing and would no doubt prepare us for the upcoming jungle hike.

Along with the relaxing, we had to fuel up, so we stopped at what Noi referred to as a “5 star restaurant in the middle of the jungle.” He wasn’t lying about being in the middle of nowhere, as we were smack dab in a little rustic residential area, obviously far from any type of civilization. There were some sickly looking dogs wandering the premises and the bathrooms consisted of a hole in the ground and a bucket of water, which still makes me a bit nervous only thinking of it. The little restaurant resembled something like a shack, adorned with Coca-Cola posters and picnic tables arranged to accommodate large tour groups. White, almost translucent lizards covered the ceiling, as they seem to all over the country. An old pick up truck passed, functioning as a school bus, with students dressed in lavendar track suits in tow. We shared some traditional Thai dishes and rice; soon enough we were ready to head out.

We loaded up the troops and began our hiking leg of the trek. We began at a tranquil rice field and were able to see locals at work. I have so much more respect for these workers who spend all day hunched over doing hard labor for a small amount of pay. It cannot be an easy life. The trail was a bit muddy, but the scenery made up for it. At one point in the trip, for whatever reason, Noi made me the leader of the hike, so I trailed ahead and just happened to be the person spotting all of the local wildlife, from spiders the size of my fist to snakes slithering alongside our path. We made a brief stop at a Meo tribal village before heading to the waterfall. Some of the dogs from the village followed us for the hour hike to the waterfall, which turned out to be stunning. I was slightly disappointed, as I had read we would be able to swim at the falls, but the water ‘s current was way too strong for my out-of-shape self. Instead, I opted to let my feet dangle in the water and chit the chat with some tourmates. We got onto the subject of eating odd foods- like snake and grasshoppers. According to Noi, Thais eat everything BUT earthworms, for whatever reason. We made our way back to the van amongst the trees and listened to quite possibly the loudest cicadas I’ve ever heard in my life. I seriously thought there was an alarm going off in the jungle. 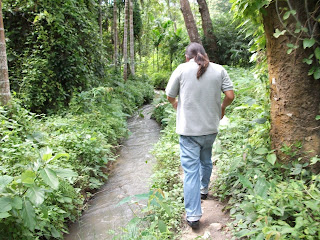 Our guide, Noi, leading us along the stream that irrigates the villages’ rice fields. 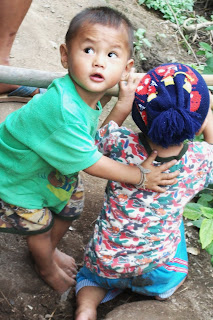 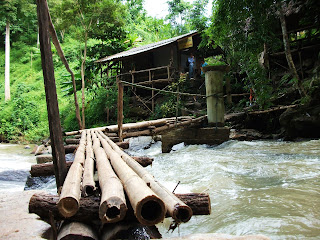 What’s with the bridges? 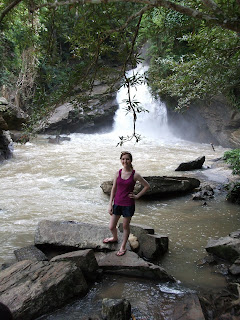 We made it back to Chiang Mai, and I met Rachel at Girasole, a popular Italian restaurant in the old city. After months of looking for genuine Italian food, I finally found it in Thailand. We stuffed ourselves with homemade bread, creamy pasta dishes, traditional coffee, and tasty gelato, then headed to the night bazaar. We immediately sought out $2 cocktails, then enjoyed ourselves by bargaining with random vendors on the prices of their fares. I was able to get some good deals on some “imperfect” MAC makeup, which I was particularly excited about. We were also determined to get a really cheap fare for a tuk–tuk and in the midst of our negotiating, we found a driver who let us take pictures on his tuk–tuk, but refused to let us drive it, despite the fair offer of me being his wife for life. 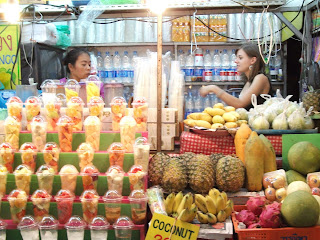 This lady had no problem with Rachel sneaking in the back. 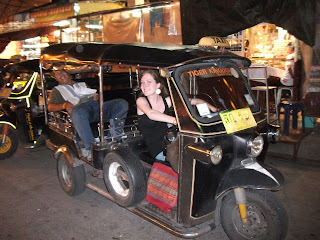 I think I would make a great tuk-tuk driver.

Looking for Rachel’s friends, we pretty much walked the distance of the old city, looking for a particular reggae bar, only to learn there are about 5 reggae bars located in Chiang Mai. On this walk, we passed the time by playing a little game. This said game involved guessing the sex of each prostitute that we saw, seeing as there was at least one on each block. Some were obviously female and others undeniably male, but a good number were questionable. It was a fun way to pass the time, to say the least. We finally found the one we were looking for, but were too tired to enjoy ourselves, so headed back to the hotel after a drink. A bit sad that it was my last day in Chiang Mai, I packed up my belongings and called it a night.