Northern Thailand in a Nutshell

By Mimsie Ladner on Tuesday, September 22, 2009
Tuesday morning came very early, as I had pre-booked a tour through http://www.hotels2thailand.com before I arrived in Thailand. My guide, “Nancy,” picked me up first at 7am. Soon, the rest of my tourmates were on board. My tourmates were all exceptionally older, with the exception of Nikkita, an Irish girl around my age, so we bonded over Cosmopolitan and Dan Brown. As we headed toward Chiang Rai, the rain started to pick up and I feared the day would be ruined. I knew that I was taking a chance going to Thailand during the rainy season, but I hoped for the best.

The rain had let up by the time we got to the spectectulary crappy Chaing Rai hot springs, the first leg of our tour. I snapped a few pictures of the spring, but failed to be impressed. I was also quite chilly at this point, as the weather had cooled down drastically and I had not been prepared with a second layer of clothing. I started to wonder if the remainder of the tour was going to be as bad as this tourist trap. So, after grabbing a cup of instant coffee, we were off to Wat Rong Khun, also known as the White Temple. We had originally been told that our tour would include the ruins of an ancient city, but they changed the itinerary as they picked us up. I was upset about not having been informed, but the White Temple ended up being the highlight of the trip.

Just outside of Chiang Rai, the unusual modern temple was designed and built by artist Chaloemchai Khositphiphat starting in 1998; it has yet to be completed. The temple consists of a captivating white ordination hall, embellished with with silver glittering pieces of mirrors. Upon entering, one walks over a bridge surrounded by eerie hands reaching up from an intended hell. Once past the devil horns on either side, I felt a bit like Atreyu from The Never Ending Story, passing through the Southern Oracle. I obviously watched that movie too many times as a kid to even remember those names, but the twin mythical creatures guarding the bridge to the Nirvana-like interior were strikingly familiar. The architecture was particularly stunning with the gloomy grey sky looming above. Nearby, there were statues of devil heads adorned with bottles of whiskey and cigarettes. The message of the temple was quite clear, but it seems that the architect also had a sense of humor. 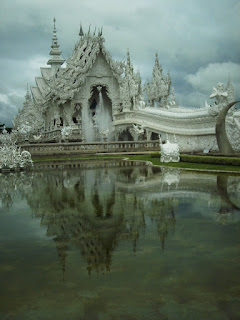 The image of the white temple reflects on the pond surronding it, making a beautiful sight. 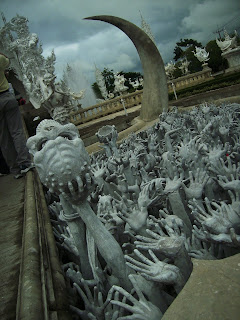 Eerie looking hands reach up from hell.
Next, we headed to the Golden Triangle, boarded a motorized boat, and were navigated along the Mekong river where Thailand, Myanmar (Burma), and Laos meet. This area accounts for 5% of the world’s opium supply; the region alone produced 424 tons of opium in 2008. The heroin produced in the area, along with needle sharing, was the catalyst for the first wave of HIV/AIDS that spread through Southeast Asia, making it now the 2nd world leader in cases behind Africa. Sadly, ethnic minorities living in the remote mountainous areas depend on opium poppy cultivation to survive and are generally under the power of insurgent groups. The government is trying to decrease opium cultivation, and has been able to do so a bit, but the sustainability is dependant upon the government’s ability to continue with eradication programs and also develop alternative sources of income for the communities. Meth is quickly becoming an issue of concern.

Despite this, efforts have been made to boost tourism in this area, as it is surrounded by beautiful scenery. There was much construction being done to create casinos and hotels that will no doubt prove to be profitable. We docked on an island in Laos, but just as we were getting off the boat, the drizzling turned into pouring. I managed to stay under the main pavilion, selling “traditional, hand-made handicrafts,” where I found a specialty of the region: Laos whiskey. Made from rice, this potent drink contains special ingredients said to have health benefits, like everything else in Asia. The two that were available for sample were cobra whisky, believed to enhance male sexual potency, and tiger penis whisky. And these special ingredients were real. And I took a shot of them both. And they were not that bad. Really. The alcohol gave me the courage to brave the rain but I ended up getting my flip-flops caught in the mud with each step, which apparently provided comical entertainment to some nearby men. I gave up and plopped under some shelter to watch life pass by. The rain gave the island a mystical feel: two beggar girls approached tourists for coins, a young boy ran through puddles, laughing, a mother fed her baby. All such everyday occurrences, yet they felt so foreign. 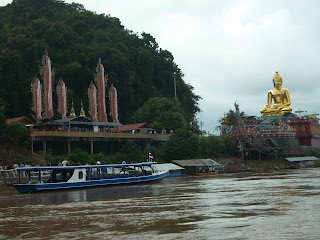 On the boat, leaving the Thai border and heading toward Burma. 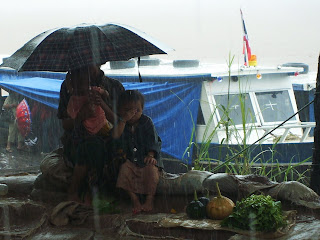 A family huddles under an umbrella on an island in Laos.
After leaving Laos, we were taken to the northern tip of Thailand to the border town of Mae Sai, located on the Thai-Burmese border. An older Korean couple on our tour had to leave Thailand to renew their travel visa, so Nikkita and I explored the knock-off vendors and street stalls while we waited. We couldn’t get very far without being approached by beggar children trying to sell a bracelet or nick-knack. Even as we were driving off, children ran after the van, hitting the windows as a last ditch effort to make a buck. It broke my heart to know that a majority of these children are victims of human trafficking groups, and are bought or kidnapped from their poor families. Ultimately, they make nothing from their takings and are often abused. It’s one thing to see this on a movie, but completely different to see it with your own eyes.

We were treated to an all-you-can-eat buffet and anyone who knows me can imagine that I took full advantage of the mouthwatering curries and fresh vegetables. Even after I was stuffed to the brim, I still managed to grab a few deserts before heading off to the tribal villages. I didn’t know what to expect from these tribal villages, but I was ridiculously excited, as I am such a culture buff. I don’t know how else really to explain this cultural village other than pegging it as a human zoo. As we were guided through the first part of the village, Nancy explained to us the background of each tribe, their lifestyles, and their tribal clothing. These people pretty much sat there as she lectured, hoping to sell one of their handicrafts. 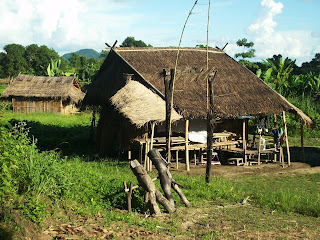 A thatched-roof home in the tribal village.
I was the only person on tour who had access to see the Karen Long Neck tribe, so I had a private tour. I remember when I first became enthralled with these women. I was in junior high, writing a biography on Robert LeRoy Ripley, the founder of Ripley’s Believe It or Not, and one of my favorite people. I was fascinated by his travels, adventures, and his unusual findings, one of which being a tribe of women who wore stacked brass coils around their necks which eventually gave them a giraffe appearance, a symbol of beauty amongst their people. At that time, I could have never imagined that I would have the chance to see these women in person, so I was incredibly ecstatic at this opportunity.

Nancy brought me to each girl, some as young as 5, showing me that they only wear a few rings as young children and continually add more with each year of age. I was informed that their necks do not really extend; instead, the weight of the brass pushes down their collarbones, giving the appearance of an elongated neck. I held one of the coils and they are even heavier than they look. I had read myths that if the rings were removed, their necks would snap off. While their neck muscles are weakened due to lack of use, this is not the case, though it is considered ugly and shameful not to wear the coils. Therefore, when women are found cheating on their husbands, they are punished by having the rings removed. As you can imagine, infidelity is extremely rare amongst the Karen tribe. 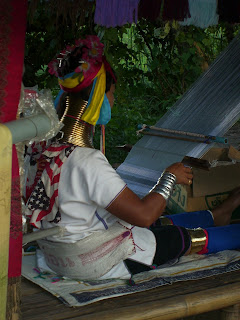 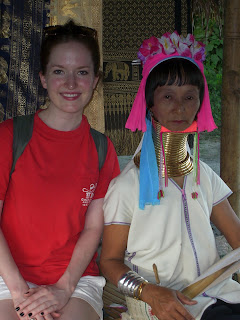 Me and the woman with the longest neck in the tribe.
I learned that these tribal people had illegally relocated to Thailand in an effort to escape their war-torn and poverty stricken homeland, Burma. The Thai government agreed to allow them to stay, but placed them in tourism villages like this one and offered to pay them (a small fee, I may add, but more than they would be making in Burma) for keeping with their traditional customs. Still, there is constant debate amongst human rights groups as to whether this is ethical. I questioned my own ethics when snapping photos with these women; it is moments like these that open my eyes and my mind a bit more… that make me a little less naive to the world- the very large world- around me. As fed up as I get with the United States at times, I am reminded as to how fortunate I was to grow up there. 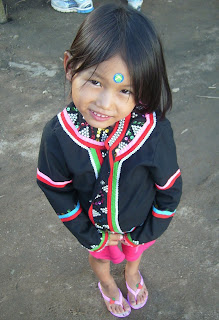 An adorable girl from the Karen tribe who was begging for me to take a picture of her- such a little ham!

The ride back to Chiang Mai was a good three and a half hours. At this point, though, the rain had stopped and the sun had come out just in time to cast rays of gold over the incredibly lush and extraordinarily green jungles around me before disappearing behind the horizon. With the captivating views that I was experiencing, the bursts of rain during the day was a fair trade-off.