Getting to Know You, Bangkok

Rachel and I woke up the next morning and grabbed a bite to eat before I jumped in the back of a songthaew (a red truck taxi) to get to the airport. These cabs have extra long covered beds to accomidate large numbers of people. You may share the cab with a bunch of strangers, but at least you’re getting a good deal. The Chiang Mai airport is ridiculously small and somewhat ghetto, so I was checked in and through airport security in a matter of minutes. I purchased a Thai iced tea (seriously, the best drink in the world) and browsed through the airport bookstore. Figuring I might need some reading material for the plane, I grabbed a copy of “The Beach” by Alex Garland. I had never seen the movie, but knew the book took place in Thailand, so I figured it would make for a good read. It made the the hour-long flight to Bangkok fly by and before I knew it, I was in the taxi on my way to my hotel, the Lamphu Tree Hotel. Many travelers make the trek from Chiang Mai to Bangkok via an overnight train, but I was glad that I paid the extra $50 for a flight. A bunch of people who I talked to that had taken the train had all been robbed. I, too, would sono learn what it would be like to be without cash or access to it, but at least that would be my own fault.

My hotel was in a great location and had superior service. As soon as I walked in the doors of the open-air lobby, I was greeted by a bellman who took my bags and a gentleman who served me a cocktail on a silver platter. I got settled into my room and then decided I’d check out Khao San Road, the famous backpackers’ mecca of guesthouses, bars, restaurants, and some seriously sketchy massage parlors. It’s also the setting where “The Beach” begins, so I felt prepared for what I would find there. I took a quick look around; there wasn’t much going on so I bought a bag of spring rolls, jumped in a tuk–tuk and headed toward the Chao Phraya river. Soon, I had people haggling me to buy anything from tour packages to fake sunglasses. The haggling- “Hey, Madame…” “Tuk Tuk. 50 baht!” “Excuse me, beautiful…”- was the one thing that I absolutely loathed about Thailand and being a foreigner automatically makes one a target for these shenanigans. I don’t know how long term expats live there without being driven completely crazy having to put up with it everyday. As informed as I was on the scams of Thailand, I ended up being conned into paying $15 to take a water taxi across the river to one of Bangkok’s most famous sights, Wat Arun. I knew something wasn’t right when I was the only person on the boat, and the water taxi next to me was completely packed. I later learned that those people payed 50 cents to get across. Still, the quick ride across the river was a nice way to see the cityscape from the water. 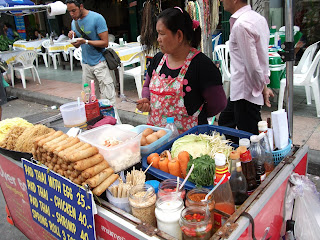 Nowhere better to eat pad thai and spring rolls than on the street. 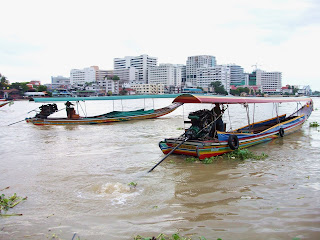 My water taxi on the river. 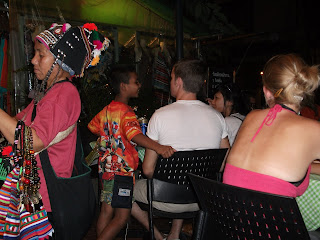 A woman trying to sell bracelets and other wares and a young child trying to charm a guy into buying a rose for his girlfriend… in a restaurant!

I only had thirty minutes to spend at Wat Arun. I was already inappropriately dressed (a skirt and a tank top) and didn’t feel like shelling out the extra money to rent a sarong, so I just walked around the exterior of the temple grounds. Wat Arun was a very stunning sight and a beautiful example of Thai architecture. The Grand Palace was also visible and I felt a bit like Anna from “The King and I” as she and her son first arrived in Bangkok: excited, mystified, and undeniably curious. I was even called “sir” a few times during my stay there. It would be wrong to say Bangkok is like any other city in the world, as it may seem at first. There truly is something fascinating about it, though I can’t quite explain it in words. It’s one of those things that can only be felt, especially in the presence of a temple as majestic of Wat Arun. 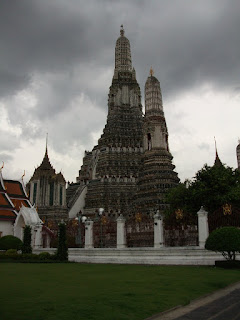 I headed back to the hotel for a dip in the pool and took full advantage of the bar/restaurant just a few feet away in the lobby. After a few Singapore Slings and Mai Tais, I showered, and headed back to Khao San Road. I decided I’d pass on the street food and settled down at a restaurant to catch up on my travel journal. The great thing about restaurants is that the food is incredibly delicious, but costs only a fraction more than the food on the street. Restaurants on Khao San Road boast an energetic atmosphere. And new friends, apparently. Just as I was about to leave, I met Katie, an English girl my age. We got to chatting a bit and she invited me back to her table for a few drinks. There ended up being about eight people at the table, but the number continued to grow as we recruited others traveling alone. By the end of the night, I had made new friends of all ages from all corners of the globe. Some had been traveling the region for months, others just arriving in Thailand. Some were about to embark on another adventure to other exotic lands, while still others were planning on working in Bangkok for a while. This is, hands down, my favorite thing about traveling. Travelers, from my experience, generally share similar personality characteristics: passionate, friendly, open-minded, and laid back. This combination is a catalyst for good communication and easy getting along; within an hour or so, I felt like I had known these people for ages. 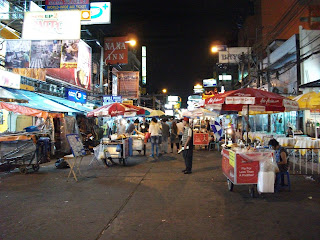 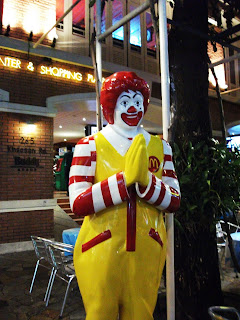 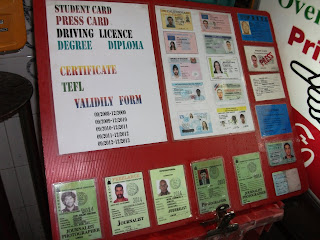 Among the seedy establishments and activities of Bangkok, getting a fake driver’s license or college degree is just a matter of money.

After a few rounds of beer and bucket drinks (buckets full of your choice of cocktail, characteristically Thai), we went for a walk down Khao San. As we wandered around, it became obvious that the famous location becomes a bit more explicit once the sun sets. Vendors agreed to make fake IDs and licenses for a fair price, masseuses promise to “love you long time”, and old skeezball men try to sell you tickets to ping pong shows. I’m not even going to go into detail as to what they are, but no, there is no table tennis involved. We made our way to a nearby club where we partied til the sun came up, taking shots and dancing with ladyboys. Like I said, there’s just something about Bangkok.