When the world is too much…

My morning schedule primarily consisted of my teaching Physician’s Office class. In this class, students are taught particular vocabulary, dependent on their English level. For higher level students, I teach the various muscle groups of the body and various reasons for going to the physician’s office and the components of a physical. Instruction is then usually followed by my demonstrating various stations to measure height/weight, grip strength, flexibility, back strength, eyesight, etc. The majority of the class is composed of the students’ participating in physical activity. 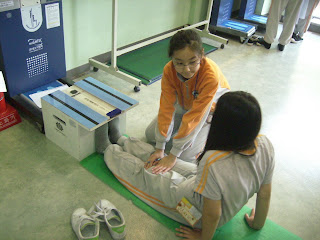 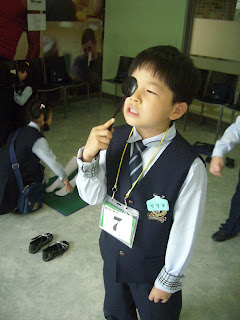 I had only taught this class once before and became a bit flabbergasted when I saw a child in a wheelchair waiting outside the room in line for my class. Not knowing how to approach this situation, I quickly ran upstairs to make copies of mazes and puzzles as a backup plan. Class started and I was somewhat relieved when I saw that the boy in the wheelchair had an adult assistant with him. Eventually, it became time for the students to begin stations for their physical. I told the boy, age 11, that I encouraged him to participate in as many of the activities as he wanted, but handed him the activities as well. Right away, he mentioned something to the assistant in Korean, and a few minutes later, she had picked him up and headed to the first station.

I am not sure what his illness was, but it kept him from being able to stand up on his own, and his hands were turned inward, making it difficult for him to grasp anything. Still, station by station, he put all effort into getting his best possible score.

There were mats on the floor where the students were to do sit ups and push ups. I watched this young boy lie down and as his assistant held his feet, he began to do sit up after sit up. Other students started to watch in surprise as he outdid all of his classmates in number and stamina. I got a little teary eyed as everyone in the room began to clap and chant his name, cheering him on.

It’s so easy to think of our petty problems as hindrances to our potential of doing something. It is the small experiences and observations such as these that act as very significant reminders of what we are capable of, even more so in those times that we feel the deck has been stacked against us.

I’ve always thought FDR a wise man: “The only limit to our realization of tomorrow will be our doubts of today.”