By Mimsie Ladner on Saturday, October 6, 2012
Recently, I wrote a post about all of the wonderful reasons to love autumn in Korea.  Not listed in the post but very much included in my reasons for loving the season is that of Chuseok.  Chuseok is a Korean holiday that celebrates the autumn harvest and is held around the autumn equinox based on the lunar calendar.  It is usually three days long and is one of the few times of the year that Koreans take time off of work and visit their hometowns to share an autumn feast with their families in celebration of the harvest.  Chuseok is also a time to remember ancestors through various ceremonies.

Chuseok fell on a weekend this year (which meant a shorter vacation for me) and my hagwon (academy) held a special event last Friday to celebrate.

I couldn’t help but smile as I watched the children enter school dressed in beautiful hanbok.  Many of the girls had their hair tied back with traditional accessories and the boys fiddled with the buttons and ties on their jeogori (tops).  “Look at me! Look at me, Teacher!” they shouted as they twirled about, tripping over their garments.  They stuck out their tongues and made the Korean “V” as I snapped pictures. 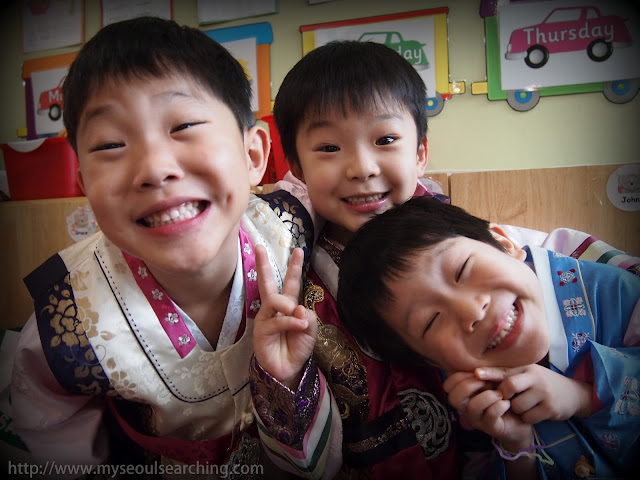 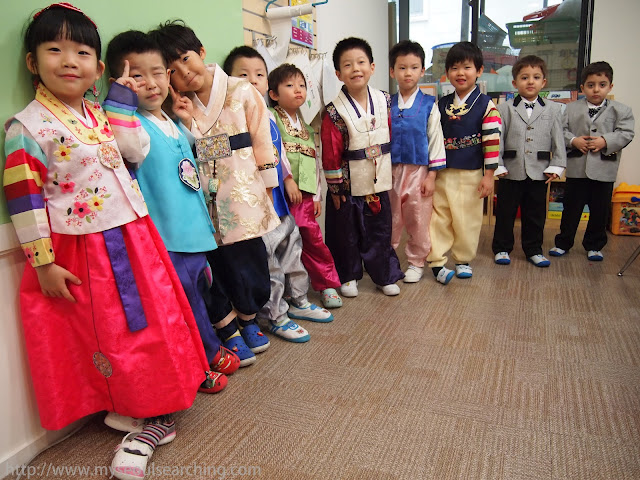 Even Daniel and Dawood (our two Iranian students on the far right) came dressed in their finest. 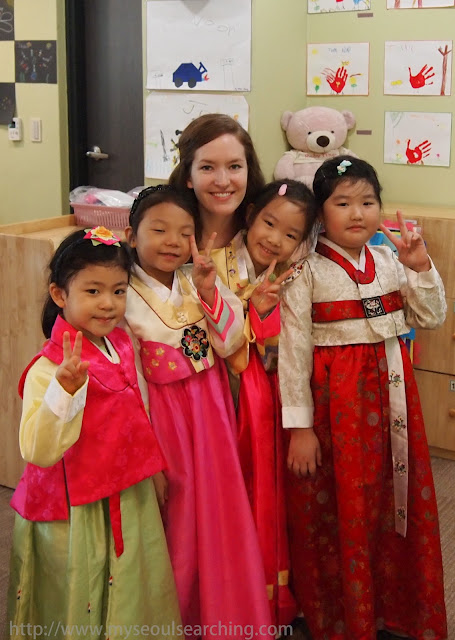 Me posing with some of the girls.  They love their pink! 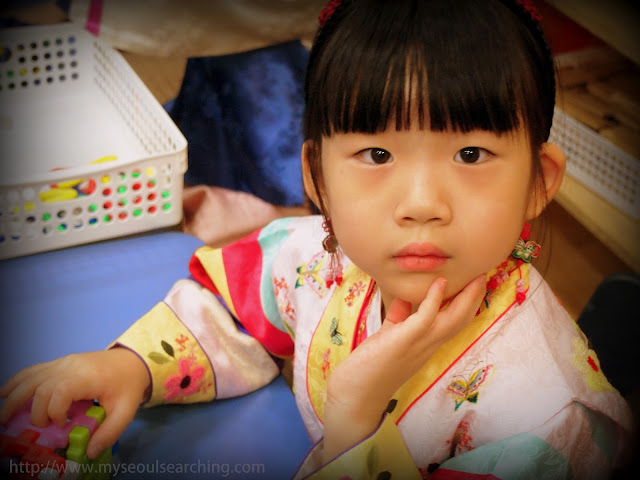 We played a variety of traditional games that have been played at Chuseok celebrations for hundreds (if not thousands) of years.  First, we played jaegichagi, Korean hackey sack.  Considering I had had some practice a few weeks ago at the MiSuDa experience, I was hoping I would perform pretty well but most of my students were better than I, which was quite an embarrassment.  At least they got a kick out of it.  We moved on to tuho, a game that involves throwing arrows or sticks into a canister from a certain distance.  This was actually a popular drinking game back in the day (way back in the day) but is now enjoyed more often by children.

We went to the gym for some games that involved singing and chanting.  Ganggang sullae was originally a female-only dance in which the women of the village held hands and walked and sang in a circle.  The men would dress the women in military uniforms and have them circle the mountains to make enemy forces think that the Korean army was much larger than it actually was.  I couldn’t quite understand what the students were saying but they seemed to have fun with it.  We also played a Korean version of Red Rover.  Instead of the chosen member of the opposite team running to determine if he or she would be switching teams, the decision was settled in the way that all major decisions are made in Korea: by a game of rock, paper, scissors.  We wrapped up the games with one similar to “What Time is it, Mister Wolf?” which turned out to be extremely entertaining. 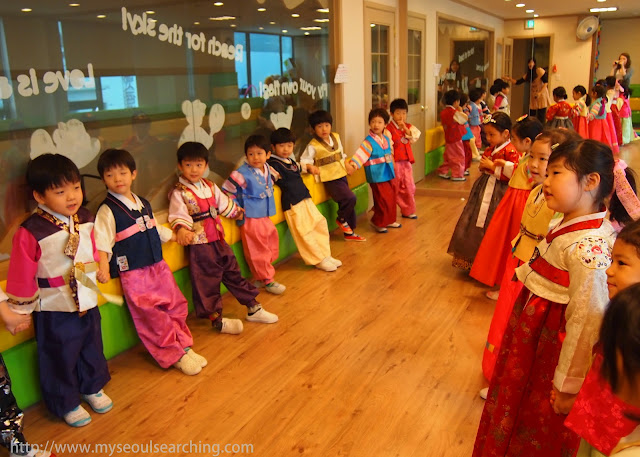 Korean “Red Rover” involves a bit more singing and walking but is still quite similar to the western game. 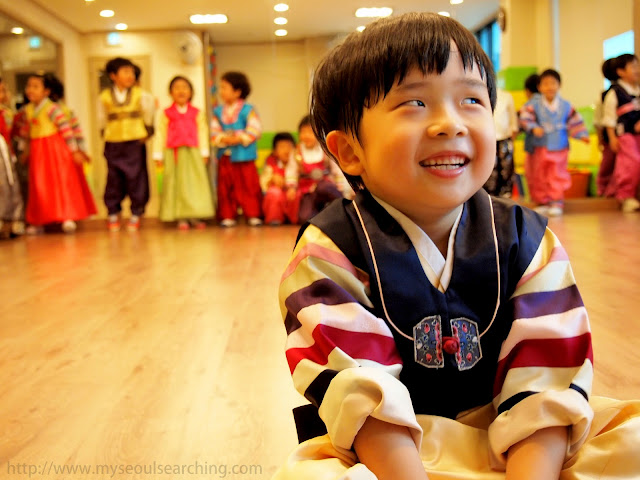 Daniel, the fox, waits for his lunch in the Korean version of “What time is it Mister Wolf?”

The final event of the day was making songpyeon, stuffed rice cakes in the shape of a half-moon.  We used white and green rice cake dough which wasn’t as sticky as I thought it might be.  I helped the students make small balls and flatten them to make a pocket for the stuffing: black beans, sesame seeds, and sugar. 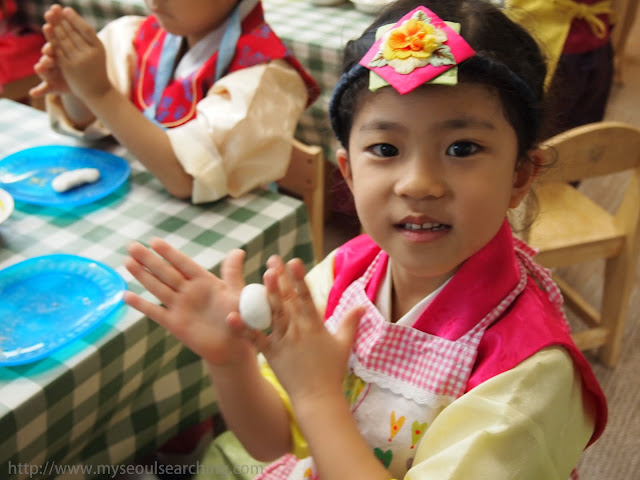 Sophie rolls the rice cake dough like a pro.

As I showed them how to press the sides together while simultaneously pinching out the bottom to make a rounded point, I made sure to make the rice cakes as beautifully as possible.  Korean superstition states that if a woman makes ugly songpyeong, she will bear ugly children.  Can’t be having any of those running around.  Though, I suppose that if I do have ugly babies, I can blame it on the rice cakes rather than bad genes.  Our cafeteria lady steamed the songpyeon to give them a shiny, slick coating to complete the process before the students took them home.  I’m hoping that the steaming process also killed all the bacteria the kids added to the stuffing mix with their snotty fingers. 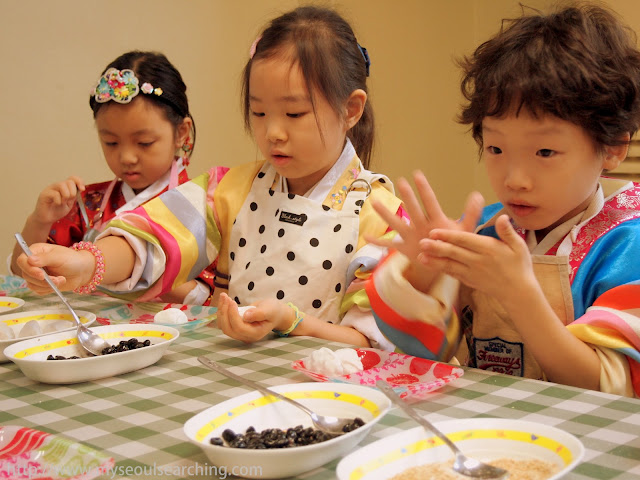 My students fill their songpyeong with sesame, sugar, and black beans.

Overall, it was a great experience not only for the children, but for me, too.  Sometimes I worry that Koreans are becoming westernized far too quickly, especially as younger generations favor Western clothing styles, television shows, and ideologies.  In watching my students participate in folk games and making traditional foods, I found some reassurance that these customs are not being completely lost.  It’s my hope that when I return to Korea in 40 years or so that I will be able to see students playing the same games, reciting the same chants during the Chuseok holiday.  And, God forbid, not in English.