I enjoyed my first late night out in Korea last night. A group of the girls went out for Mexican food and margaritas at On The Border, which was a treat, though pricey. Korean food is so cheap, but as soon as a Western name is involved, it drives the price tag up immensely. The same prooves true for cosmetic products, laundry detergent, and candy. Still, it was worth every penny. We stopped by a patio bar next and it felt extremely weird stepping off the obviously Asian street scene into a smoky room of foreigners drinking Budweiser. It was such a comfortably familiar feeling, but completely odd at the same time. The next bar was even more surreal as Hattiesburg’s own Afroman was blaring as we walked in. The night was a good one, though I dreaded the morning after getting to sleep around 3:30.

Feeling tired, I was not looking forward to work. I was happy to learn, however, that I would be teaching the higher-level English speaking students. Because the students are able to converse more, it not only makes the day easier, but it’s always fun to see what the kids come up with.

My teaching schedule changes daily. At the English Village in which I work, classrooms are constructed to resemble particular places, such as a bank, immigration stand, post office, hospital, broadcasting studio, grocery store, etc. I use role playing and dialogue to teach vocabulary and encourage conversations that would normally take place in these areas. Because the children are not allowed to speak Korean (Rule #1) and the majority of their teachers are from Western countries, they get an experience of living in an English speaking country for the length of their stay (2 days-1 week). 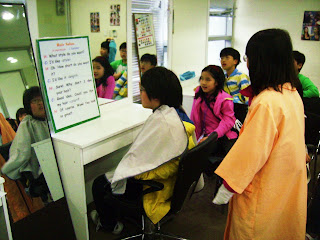 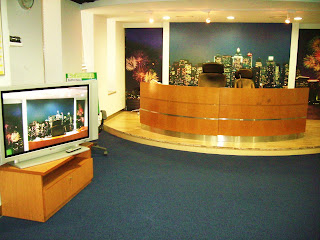 Talk show class, in which the students conduct their own talk show or newscast and can see themselves on TV.

In the following class, I had the children fill out a stolen property form to practice giving descriptions of things and people. They were to describe the thief that stole their property. One girl wrote, “The theif looks like man, but wears a skirt.” She was so proud of her answer and my response. The creativity of these kids not only made my day managable, but extremely enjoyable, as children always seem to have the ability to do. 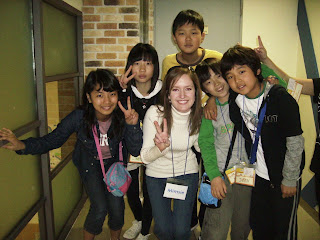