Yesterday was an absolutely beautiful day here in Seoul, and fortunately a day off from work. I decided to hop on the metro and travel to Ilsan, a relatively new suburb about an hour and a half west of Seoul. About ten years or so ago, Ilsan was built to alleviate housing shortages and overpopulation in the city of Seoul. Koreans refer to it as a “bed city”, as they work in the center of Seoul and reside in Ilsan. In contrast to the busier areas of Seoul, Ilsan was more strategically landscaped, if you will, and provides a sense of openness and a focus on nature. Still, there are all the amenities of the city, complete with a shopping district popular with younger generations.

I met Sue and a friend of hers, and we headed to the Lake Park for a nice picnic lunch. Coincidently, Goyang was holding their annual international horticulture festival, so the entire park was covered in flowers of every color and aroma. There were many crowds, but despite the amount of people, the atmosphere was significantly peaceful. It was so nice to see so many families out enjoying life on a Friday afternoon. Importance of the family is an undeniable part of the Asian culture, and one that I think the United States should furthur emphasize. 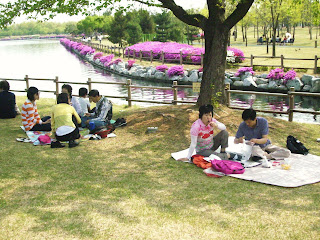 We hired some bikes for a while, which was a nice way to see the park. I looked extremely dorky pedaling around so low to the ground on my neon pink grandmaw bike. The park was stunning, though, and I was happy to find some photo ops of Korean architecture and cultural symbols spread throughout. 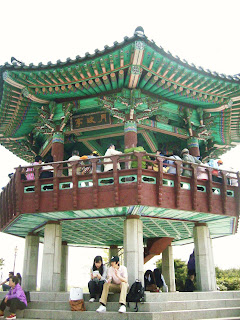 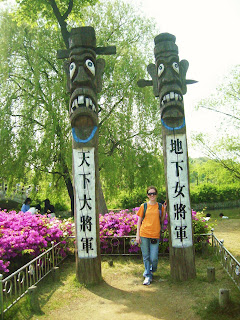 Before I get any comments, I am NOT wearing a fanny pack… ok? Okay.
One of the highlights of my day was passing “The Singing Fountain” in Park Lake. I’m sure it’s a beautiful sight at night, but it also continuously plays music. We sat around for a few songs, all of which were from the “Mama Mia!” soundtrack. The playlist certainly drew in singing crowds of all ages. This is not the first time I have heard “Money, money, money” or “Dancing Queen” in Korea. In fact, I hear at least one Abba song a day ringing from storefronts or playing in cafes. I still don’t understand the Korean obession with Abba, but it never cesases to make me laugh a little. Especially since most of those singing don’t know the basics of English. Oh… Asia.
2
Previous Post
Next Post