Let’s just say my initial plan of seeing the iconic floating markets of Bangkok on Friday morning fell through when I woke up with a ridiculous headache. After popping a few Tylenol, I finally rolled out of bed and stuffed myself with banana pancakes and fresh OJ, the Thai tourist breakfast specialty. It was then off to the Grand Palace, as any visit to Bangkok would be incomplete without seeing the striking complex.

Upon entering Wat Phra Kaew (“Temple of the Emerald Buddha“), one feels as if he or she has been transported into a Thai fairy-tale; golden spires reach toward the sky as demon statues peer ahead in war-like poses, holding up the majestic chedis. An air of grandeur permeates amidst the palace walls, but Buddhists who have made the pilgrimage to this religious destination remain serene and humble. The area consists of over 100 Ratanakosin-style buildings that represent 200 years of royal history; with the exception of wide-eyed, camera-happy tourists, it seems that time almost stands still. 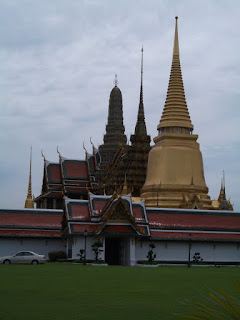 The view upon entering the grounds. 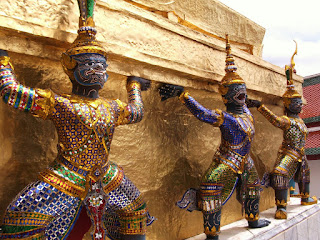 Demons hold up the golden chedi.

The Emerald Buddha housed in the temple is one of the most venerated sights among Buddhists, hence the name of the temple. I had expected it to be very different than what it actually is: a small emerald Buddha that is barely visible, even once one is inside the temple. The decor that surrounds it, however, is spectacular. The statue is dressed in robes according to the season (hot, cool, and rainy) and sits atop a grand alter adorned with gold. Visitors can sit to pray and I decided to join the crowd. I was happy that I had read up on my Thai etiquette and knew never to have my toes pointing toward Buddah; those foreigners who did stood out.

Another embellishment that I was particularly fond of was the murals painted on the temple’s interior walls. The murals illustrate the saga of the Ramakien, the Thai version of the Indian epic Ramayana. I snuck into a group touring the temple and was able to catch the guide’s description of the tale. The story acts as a series of fables of sorts and conceptualizes conflicts of duty and moral obligations to different people or in various situations. Rama is portrayed as a human, rather than a supernatural being, with all the accompanying shortcomings. He encounters and struggles with moral dilemmas but eventually prevails by simply adhering to the Dharma, the righteous way of Buddhists. 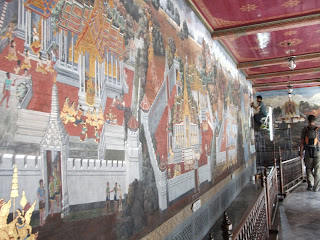 The beautifully detailed mural depicting the story of the Ramakien lined the interior temple walls.
After visiting the Grand Palace, the former royal residence, I took a stroll through the amulet market. I didn’t know where I was at first, but I had remembered reading about it in my guidebook and finally made the connection. The streets of this makeshift and somewhat bizarre market were lined with tables covered in little good luck charms (in addition to dentures- yes, dentures!), most of which were small stones engraved with images of Buddha. Varying in color and some even containing colorful gemstones, buyers purchase these talismans in hopes that they will bring good luck. Perhaps my eye was untrained, as they all looked alike, but it is said that each amulet has a specific type of luck, whether it be in romance, in business, or in harvest. After this, I soon noticed that all of my taxi and tuk–tuk drivers had these in their vehicles. But, buyers beware: there has been recent controversy that some of these amulets are not properly blessed, causing a decrease in amulet sales. Yes, even the amulet economy is down. 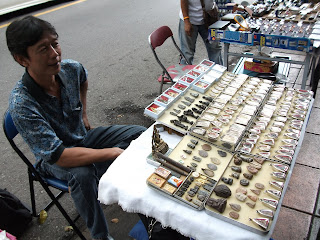 The Buddhist influence in Thailand is undeniable, especially in places like these. Considering more than 90% of Thais are Buddhists, it is understandable as to why the religion is so influential in the iconology of Thailand. Monks draped in orange sheets, as I’ve posted previously, is synonymous with the country, and the community of these men is highly revered among its people. So much so that when I was in the market, I watched a very elderly woman bump into a monk as she was walking. She turned toward him and upon seeing her terrible mistake, she bowed down to him, apologizing profusely. I can only guess she was trying to reverse her karma so she wouldn’t end up as a grasshopper or one of those albino lizards that seem to be everywhere in her next life. The monk turned and chuckled a bit with his other monk friends.

I wanted to see Jim Thompson’s house, a supposedly stunning example of teak architecture, so I got a tuk tuk to Siam Square. As fate would have it, I was dropped off at the colossal MBK shopping center. Architecture was soon placed at the bottom of my to-do list and so began my extensive shopping spree. I almost didn’t know where to begin as I took in the hundreds of visible small shopping stalls and the directory of the rest of building. Anything from fake Chanel purses to cheap iPhones to home furniture could be purchased here and it was on this day that my luggage doubled. I will stand by my assertion that this is seriously the best shopping in the world. When purchasing a few copies of Rosetta Stone, however, I realized that I was out of cash. This was not a problem, as there were tons of ATMs in every which direction. The problem was, however, that my debit card was gone. To this day, I do not know how I lost it. It could have been those bucket drinks on my first night on Khao San, but I think that I must have left it in the ATM when withdrawing money on my first day in Bangkok. It could have even been the result of some previous bad karma. Who knows? Needless to say, the shopping was tragically put to end as I only had enough cash to get a ride back to my hotel. Dad wasn’t happy about this one. 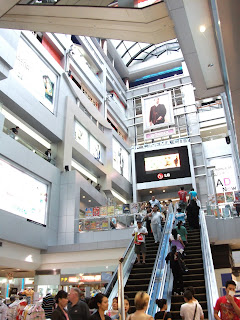 View from the first floor in the MBK Center. 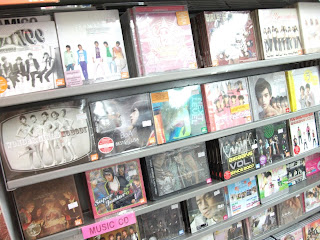 I couldn’t escape Korean pop music, even in Thailand, where it seems that it is the only music played. In this music store in the MBK Center, an entire aisle was dedicated to K-pop music groups: Wondergirls, Shinee, Super Junior, and Rain just to name a few.

Fortunately enough (and by the grace of God), this is commonly occurring happening in Thailand and the Western Union on Khao San stayed open until 11pm. My dad saved the day by wiring me some money. Fears aside, and wallet replenished, I did what any girl would do: more shopping. I did, after all, have to find additional luggage to hold all my new goodies.