By Mimsie Ladner on Monday, September 21, 2009
After a great breakfast of a burrito-sized omelette, tropical fruit, and fresh squeezed OJ, the desk attendant of my hotel called a taxi per my request. As I waited, we got to talking and I learned that he was a Thai native about my age. He also worked in Destin, Florida (the beach destination I’ve made visits to yearly since I was a kid) at the same hotel a friend worked at during the same time. I know I say it a lot, but it is truly a small world.
My very hip taxi driver picked me up and was kind enough to point out major sites on our trip to the Tiger Kingdom. He also noted the everyday activity surrounding us on the highway. I noticed a large group of Thai people huddled together on the corner of a sidewalk under the shade of a tree. “Labor,” he said, indicating that the people I was watching were waiting for work from employers seeking cheap labor. I have never really seen this outside of Mexico, so I was taken back a bit. We arrived at Tiger Kingdom where I opted to take my pictures with the “big cats.” I considered paying to see the babies, too, but ultimately decided one size would be enough. Seeing as I was alone, I paid an additional fee to have a photographer snap some photos, because let’s face it… you can’t cuddle up next to a wild beast and not have proof that you did it.
Tigers, animals that once inhabited the jungles of Thailand in large numbers, are slowly becoming extinct due to various factors, including poaching and illegal wildlife trade. There are many conservation parks set up throughout the country, but there are also venues that thrive on tourism which engage in unethical behaviors such as drugging the tigers or chaining them to walls. I had been told that the Tiger Kingdom was one of the few places that does not engage in this cruel behavior. It was a really cool experience to be so close to such majestic, powerful, and surprisingly gentle creatures. I had read that there had been a recent attack on a tourist at this place, but for some reason, things that should scare me don’t. This is most likely not a good thing. Still, I was able to rub the bellies of three female tigers, all aged around 20 months. I couldn’t believe the size of these beauties for only being two years old. I did feel a bit awkward with a photographer snapping a large lens camera in my face as if I were posing for wildlife glamour shots. Tiger Kingdom also featured other animals like lion cubs and camels, and it had an attractive setting, but it was pretty touristy. Still, it made for some cool photos and a once in a lifetime experience. 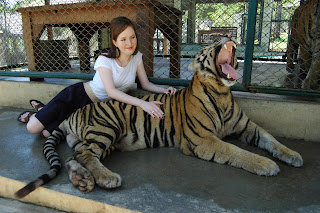 That yawn sure is intimidating. 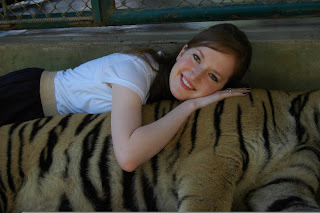 Up close and personal… seriously.

Next, I was off to explore the wats (temples) of Chiang Mai. Wats are undoubtedly one of Thailand’s most iconic attractions. I was first greeted by a little bald guy standing in a gazebo, draped in construction-orange sheets, clothes that Buddhist monks make themselves. I can only describe them as “monk togas” and they are one of two material posessions that monks are allowed to own. He greeted me with two shyer monks on either side of him, one reading an English newspaper and the other chatting in Thai on a cell phone. He told me in broken English that they were students in their early twenties studying Buddhist teachings, but that they were also eager to speak English, as it was “very important” because it is the “world’s language.” They were especially happy to find out I was an English teacher. I was surprised to learn from them that even school-aged boys can be monks; almost every good Buddhist boy is a monk at some point in his life, if only to please his mother. I recently read in the novel “Welcome to Hell” a true account of an innocent man’s experience in a Thai prison, that there are particularly bad consequences for those who engage in crimes against monks. They are no doubt some of the most revered people in Thailand. Before I knew it, almost an hour had gone by and their lunch break was over. They wished me well and safe on my journey. I felt that this was a particularly good start to my wat hopping. 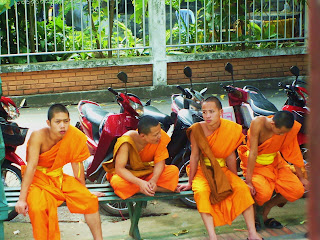 I found my way to Wat Phra Sing, one of the most famous wats in Chiang Mai. Words cannot describe what I experienced at the site. There’s something fascinating, yet mysterious about the gold spires of temples reaching heavenward and stone demons guard the entrances while monks chant monotone mantras in the distance. Countless statues of Buddha look down from the interior alters upon the people in every which direction. Devoted Buddhists drop coins in the residing monks’ bowls in hopes of gaining good merit to move them up to a higher position in their next life, closer to Nirvana. One of my favorite parts of the wat was a garden in which wise proverbs are posted on each tree. One that sticks out in my mind was: “Read not only books, but man also.” As I continued from Phra Sing along Ratchadamnoen Road, I found myself wandering from wat to wat, entranced by my surrondings. I was able to get some pretty stunning photographs; I’m sure that this has nothing to do with talent, but rather the beauty of the architecture. Soon enough, my stomach told me it was well past lunch time. 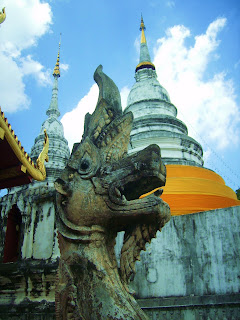 Wat Phra Sing, and the rest of Thailand, is a photographer’s dream. 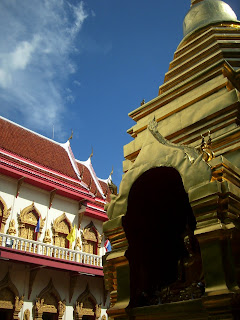 Yet another wat in Chiang Mai. Two of the many Buddah statues overlooking a garden.

I hopped into the nearest restaurant which offered appetizing lunch specials. I figured Pad Thai was the best option and was brought a heaping portion of the Thai specialty, along with iced lemongrass tea and the four staple condiments found at any food joint: fish sauce, sugar, sliced chillies in vinegar, and dried red chili flakes. It’s customary to add about a tablespoon of each to the dish, though Thais usually go a bit heavier on the sugar. It was absolutely delicious, especially considering the meal cost about a dollar. Thank you, exchange rate! 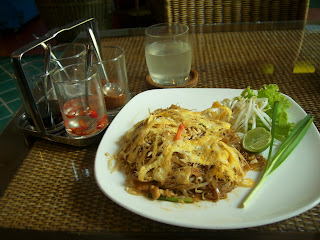 My $1 lunch: Pad Thai, lemongrass tea, and an array of tasty condiments.

I headed back to the hotel for a dip in the pool, a shower, then headed off to the Night Bazaar area. Before getting my shop on, I stopped in to a non-sketchy parlor (no happy endings here!) for a traditional Thai massage. All I have to say is that I’m glad that I opted for the half hour session instead of the hour session because it was very painful. In contrast to a Swedish massage, different limbs of your body are contorted to various positions one may find in an extreme yoga session… or in a torture chamber. Then, your muscles are kneaded so much so that your organs feel as if they are being displaced. It did relax for the first few minutes, but I was feeling its effects for a few days.

Making my way through the night bazaar, I was immediately drawn into the shopping scene of both traditional Thai goods in addition to every knock off product known to man. I grabbed a chair at a restaurant in the bazaar area and found myself chowing down on chicken with cashews and vegetables and green papaya salad, as recommended by Anthony Bordain. Though the salad tasted like ocean water had been used as dressing, the domestic Sanga beer actually tasted like beer and washed down the meal very well.

After browsing through the bazaar once more, I headed back to the hotel, feeling very accomplished after my first day traveling in Thailand.

Spin Kicks, Spirituality, and a Sunrise: Templestay at Golgusa Temple