Thaipusam: No Pain, No Gain

At some point during a journey, it is inevitable that one is subjected to one of those “I’m not in Kansas anymore” moments that throws him or her into a realization that he or she has wandered far down that yellow brick road, no longer close to the normal or recognizable. I found myself having quite a few of those moments in Malaysia, though one day in particular had me thinking that I had traveled even further than Oz. 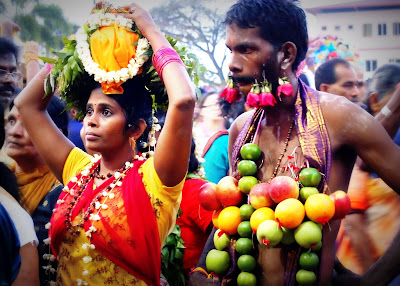 About a year ago, I was cleaning up my apartment, only half watching TV when I glanced up and noticed some very interesting images popping up on the screen. My attention was grabbed and I continued to watch the fascinating display of some sort of religious ceremony. Worshipers, who were pierced with hooks and carrying huge box-like displays walked in procession, some in trances, toward a huge cave. What was this festival? Where could it possibly be? I was curious. And I was going.

I soon learned that Thaipusam was a Hindu festival that celebrates the occasion when Parvati, a wife of Shiva, gave her son Murugan a spear so he could vanquish the demon Soorapadam, who had been tormenting all the good souls of the universe. Essentially, this commemoration is symbolic of good prevailaing over evil. Although this festival originated in Tamil Nadu, India, it is held in other areas where there are Tamil communities, including Malaysia. I booked a flight to Kuala Lumpur as soon as I found out that I would be in Vietnam during the festival.

I woke up around 5AM on the morning of the holiday. I hopped on the Kommuter train toward the Batu Caves and was pleasantly surprised to find that it wasn’t as crowded as I expected it to be. While many participants had already begun the 4km procession from Chinatown at midnight, still others, like children and families, were going via bus or train. A few of the younger kiddos were nodding off during the ride as they held on to their bags of coconut milk that would be brought into the caves later in the morning.

The sun was just coming up as the train braked. The Batu Caves were still illuminated by floodlights. The sky was calm, starting to show the signs of daybreak. Yet, when I exited the train, I was greeted by a vision that I had not expected: a ferris wheel, cotton candy vendors, a booth selling fried god-knows-what. It was a carnival- right smack-dab in the middle of this holy and traditional religious procession. What the hell?! I’m still not sure if it was a permanent thing or if people had set up shop for the festival but it had kinda ruined the other-worldly experience for me. 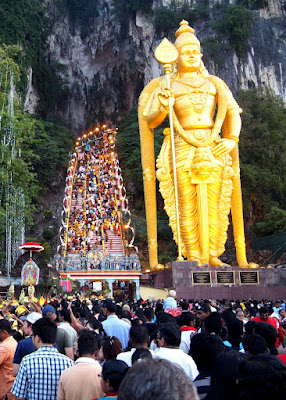 Thaipusam attendants in procession to the Batu Caves.

Nevertheless, I kept walking, heading in the direction of the giant gold statue of Lord Murugan. As I approached the entrance to the caves, I came upon the procession of devotees. This is what I had come for and I watched in awe as they passed me. It was just like what I had seen on TV, but much more peaceful. Though the hooks that pierced their skin and the spikes through their mouths seemed painful, tranquility was present in their eyes, which were usually cast upwards on the statue of Murugan. There was also this soft, traditional Hindi music playing in the near vicinity, giving the scene some beautiful background music. 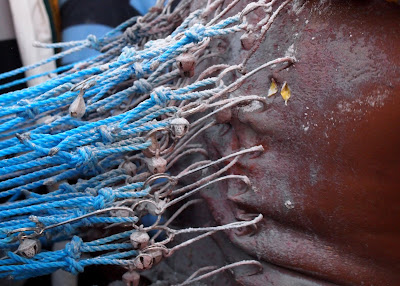 I observed devotees as they passed. Many carried containers of milk over their shaved heads. Others attached oranges to hooks that hung on their backs. Some put spears through their cheeks or tongues (a reminder of Murugan). There seemed to be chains and ropes everywhere. Yet the most impressive were those bearing intricately decorated canopy-like structures that seemed to weigh a few hundred pounds. All of these items are referred to as kavadis, and they are taken on either as a thank you for an answered prayer by Murugan or as a penance for past wrongdoings. The more pain endured, the more merit achieved.

There were three barricaded lines to/from the Batu Caves. One was an entrance for bearers, another was an entrance for the public and press, and the final was an exit. As I walked along with the public, I tried to stay close to the side, out of fear of a stampede… or something. This also gave me a good view of the devotees. Participants would begin chanting “Vel! Vel! Vel!” (Vel being the name of the spear used by Murugan) and others would begin going into a trance. The kavadi bearers would have to stop every so often and have their assistants rub out their calf muscles, which were shaking uncontrollably. 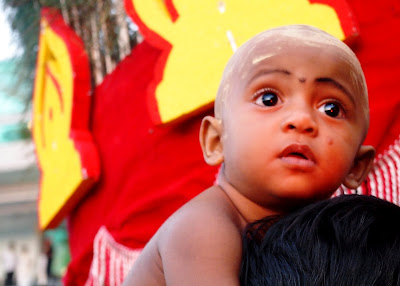 When I finally reached the top of the stairs, I started getting a bit worried as the crowds were getting larger and I was coming down with an uncharacteristic case of sudden-onset claustrophobia. I couldn’t get a good view of the devotees once inside the cave, but I believe that they pour the milk over the statues of Murugan. I watched the Kavadi bearers have their hooks and spikes and other hardware removed while priests sprinkled (antiseptic?) ash over their wounds. Amazingly, I didn’t see a drop of blood the entire day. As I wandered around for a bit, I noticed that quite a few people (devotees included) were staring at me and had their cameras pointed in my direction. Even in the midst of this unusual atmosphere, I was still the freakshow with my white skin. Go figure. 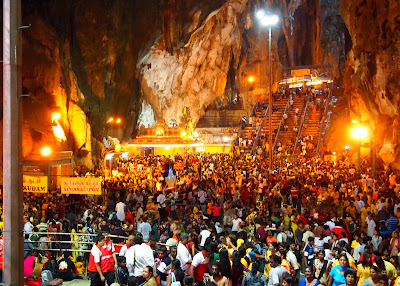 Inside the Batu Caves. 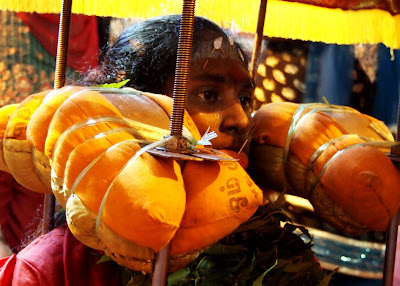 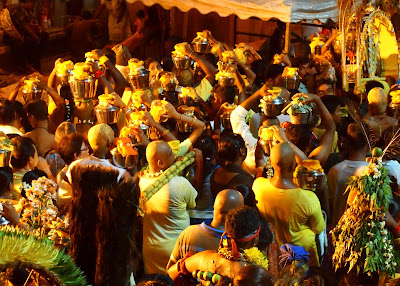 Devotees wait in line to give up their offerings.

I headed back down the stairs and wandered around a bit more before the heat got the best of me. The train ride home was hellish to say the least, as I had to wait forever in line to get a ticket then make my way through a crowd of pushy people to get on an already packed car. Standing in a stinky air of humanity in a car with no ventilation, I started to mutter curses in my mind. Then, I quickly thought back to what I had just seen the devotees do for thanks or forgiveness. Learning a lesson from them, and thankful for the opportunity of actually seeing such a sight, I wiped the negative thoughts out of my mind. After all, no pain, no gain, right?