By Mimsie Ladner on Wednesday, February 1, 2012
McDonalds’s. Dunkin Donuts. Pizza Hut. Burger King. Just a few names that one might associate with American fast food. While it’s true that these companies may have been born in the land of golden arches, today they can be found all over the world.

When I first started traveling, I refused to enter a Mickey D’s, in fear that it would disturb my cultural experience of whatever country I was visiting. Since then, I’ve learned that having a meal or two at American fast food joints overseas is, in fact, a cultural experience in itself. While fast food franchises usually serve up original items, like the Big Mac or cheese pizza, they will also offer dishes that accommodate the tastes of its citizens. This proves to be true in Korea and since I’ve been here, I’ve had a lot of fun trying the unusual options. 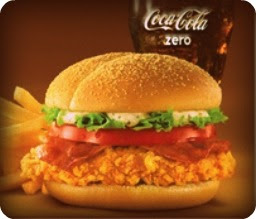 McDonald’s seems to be the most common American chain around Korea and it was my safe haven when I first arrived in the country without any language proficiency or knowledge of Korean food. I could easily point to a picture on the menu and my order was easily understood.

The first time I saw the menu, however, I was a bit turned off by the Shrimp Burger. I suppose it is made similarly to our fish sandwiches at home, but for some reason the idea of shrimp mashed up and pressed into a patty is just a tad repulsive to me. In the past couple years, I’ve eaten everything from fried crickets to live octopus to dog but for some reason or another, I still can’t do the shrimp burger. What I do love to order, on the other hand, is the Shanghai Spice Chicken Burger. A chicken breast (or random parts… it IS McDonald’s!) is fried with various oriental spices, smeared with some mayo, topped with lettuce and tomato, and placed on a bun. While it’s not too different from the average chicken sandwich, the spice is a tasty twist on the original.

Burger King‘s Bulgogi Burger is also an item distinctive to Korean fast food chains. Bulgogi is a common Korean dish of grilled sliced beef marinated in a sweet sauce. The restaurant uses the bulgogi sauce to give the burger a distinctive sweetness. I, myself, am not extremely fond of it, as there are very few sweet flavors that I like in a meal that’s no dessert. Still, I can see how Koreans, or anyone with a sweet tooth, would favor the taste. Burger King also serves up patbingsu, a traditional Korean dessert of shaved ice topped with sweetened red beans and fruit. It’s a strange way to follow up a burger set-uh (combo) but is tasty all the same. 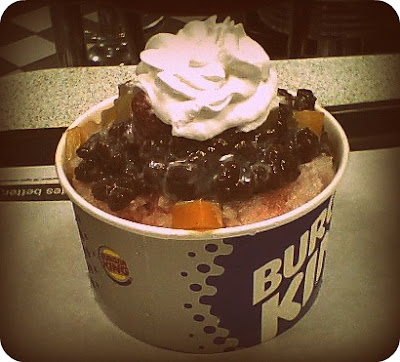 Patbingsu is a tasty traditional Korean sweet that can be enjoyed at Burger King. Who knew? 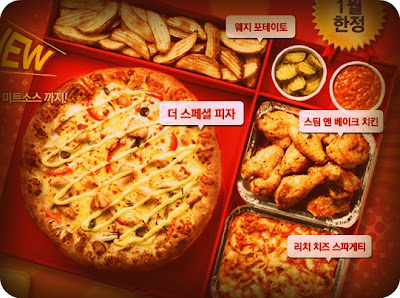 Both Pizza Hut and Domino’s also use bulgogi meat as a topping on many of their pizza variations; compared to other toppings, it’s the most Western. Unlike corn. I’m not sure where they got the idea, but corn is a standard topping on almost all pizzas in Korea. I don’t mind eating it, but because it feels as if I’m committing a culinary sin when I do, I was quick to learn the phrase “ogsusu baegu, juseo” (“without corn, please”). Another un-American, but surprisingly delicious topping is sweet potato. Whether it’s stuffed in the crust or sits atop the cheese in slices, the flavor works quite well with tomato sauce and cheese. Fortunately, Parmesan cheese is available alongside Tabasco sauce (something I MUST have on my pizza these days) at pizza restaurants. And lest we forget the side of pickles that comes with each order. Oh, the pickles.

Having to pass Dunkin Donuts every morning on the way to work this past year was not good for my health. I made frequent stops for bagels with cream cheese and iced lattes. I also got a good laugh checking out the doughnut selection while I waited for my order. DD is consistent in producing some incredibly bizarre culinary creations ranging from stomach-turning to intriguing. The “Banana Filled” in the shape of a banana with yellow frosting seems tolerable enough, contrary to the “Kimchi Croquette” filled with the famous fermented cabbage. There are some doughnuts that are rice based (super chewy) and still others that are marketed to the health nut, like the vitamin doughnut (surrrrrre). I was most fascinated by the vegetable themed doughnuts, said to be made from carrot, broccoli, or spinach. For the sole purpose of blog research, I decided to try a few of them and was a bit amazed at their tastiness. After getting over the orange and green colors, I enjoyed their cakey texture and perfect amount of sweetness. My favorite was the carrot doughnut, as it was somewhat comparable to carrot cake, though the icing was lighter. Unfortunately these are no longer on the menu, but no worries… Dunkin Donuts has new creations all the time.

The Banana Filled, Kimchi Croquette, and Sweet Potato Stick Sand are all available at your local Dunkin Donuts. If you’re in Korea, that is.

I’m not a huge fast food fan, but I will continue to be intrigued by the Korean adaptations of American fast food. Exploring the uncustomary menu items has been a fun aspect of traveling and a way to change things up a bit when bibimbap gets boring.

So, the next time you are traveling and find yourself cringing at the uncanny menu choices at a foreign McDonald’s, order the most unusual item. You might just be pleasantly surprised. If not, well, it’s all part of the adventure.