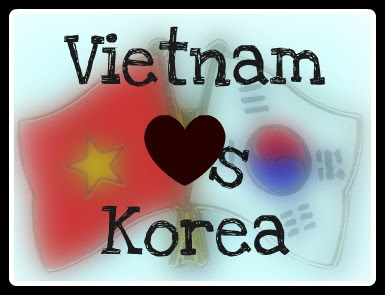 Having been away from Seoul for a few months now, I tend to find myself “homesick” for Korea these days. In addition to missing friends and loved ones, I often have kimchi cravings and strange desires to jam out to K-Pop. I yearn to hear the fluid sounds of the Korean language and go shopping for clothes and cosmetics in the subway stations. There are a lot of things I miss about my second home, but fortunately for me, Vietnam (my current location) has a Korean obsession of their own.

When I arrived here back in January, one of the first things I did was spent a few days wandering around my neighborhood. I found that I lived in a really cool area with lots of Vietnamese character. But, as I passed multiple beauty salons, I couldn’t help but notice the faces on the sign boards and the posters covering the windows. These guys looked familiar and it didn’t take long to recognize them from Korean dramas and movies. What was this? I wasn’t sure but I have to admit that seeing the faces added a bit of familiarity to the unknown around me.

I spent most of my first few nights in my apartment, not yet feeling confident enough to explore the city after sunset by myself. My TV was often turned to MTV Vietnam where a variety of music videos played. Strangely enough, the majority of them were Korean and American, while only a few of them were Vietnamese. It was a bit surprising to see that when the Korean music videos played, there were no subtitles. Despite the language differences, Vietnamese love their K-pop. (And who wouldn’t?) I’ve had some friends who teach here tell me that their students are engrossed with groups like Girl’s Generation and 2PM. There has been enough demand that some groups have had concerts here in Vietnam. 2NE1 had a big turnout, as did Super Junior, whose fans fainted or broke down into emotional outbursts upon seeing the group. 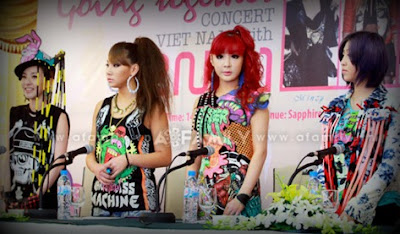 2NE1 had a big turnout at their concert in Vietnam last year. (Photo credit: AFamily)

When I wasn’t in the mood for MTV Vietnam, I’d surf through the channels, stopping every once in a while on an interesting looking show. I found quite a few Korean dramas but noticed that they never used subtitles. Instead, the dialogue would be dubbed over by a single voice, often female and emotionless. I imagined that it would be quite boring to watch a drama with only one voice dubbing all of the characters’ lines, but I guess the Vietnamese are okay with it.

I knew that the Hallyu Wave was a phenomenon sweeping across Asia but after being in Vietnam, I realized that Korean entertainment is far more popular than its Vietnamese counterpart. So, what’s with the obsession? I read a few articles on the subject and it seems that part of it stems from the Vietnamese fixation on romance. There’s no doubt that Korean men are portrayed as kings of romance in movies and the plots that Korean dramas are based on are always intense, though unrealistic, love stories. The Vietnamese are also attracted to the modern lifestyle portrayed in Korean media. Unlike American productions, Korean programs keep with traditional Eastern values, making them more appropriate for other Asian viewers.

What started as a fascination with Korea’s media has led to an addiction with Korean products for Vietnamese people. In addition to clothing boutiques selling only Korean fashion, and salons offering the latest K-pop hair cut, cosmetic products made in Korea are all the hype. When browsing through the cosmetics isle at the store, I’m always surprised by the fact that certain goods use “Korean product” or “Made in Korea” as a marketing tactic. Beauty salons do the same thing, advertising that their facials or conditioning treatments are carried out using only the best Korean cosmetics and hair products.

Finally, the Korean food craze also seems to be catching on here in Vietnam. Korean restaurants are popping up everywhere, serving everything from bibimbap to galbi to naengmyeon. I’ve been to a few different restaurants and I have to admit, everything that I had tasted quite authentic. Bravo, Vietnam.

The love for all things Korean has made it cool for students to take interest in Korean studies. I’ve talked to a few Vietnamese people through the CouchSurfing website who have studied the Korean language after learning about the country through its media. Many of them hope to one day travel to Korea or even work there.

It’s not clear if the Vietnamese obsession with Korean culture is everlasting love or mere infatuation. Media and fashion trends come and go, no matter where one is in the world. But, I have to admit, I’m quite thankful that my kimchi cravings can be satisfied quite easily here in Vietnam. And that I can see my beloved Lee Min Ho’s beautiful face everywhere.