To say that Korea is a beautiful country would be a great understatement. Especially in the countryside, it’s easy to be mystified by the nation’s beautiful landscapes and breathtaking scenery. There are plenty of recreational opportunities for nature lovers and outdoor sportsmen to take advantage of while in Korea. One particular activity that is highly popular amongst locals and visitors alike is cycling. There are hundreds of trails throughout the country, many of which offer riders a chance to get closer to the natural beauty of the nation. Interest in these trails has been growing, even at an international level, and cyclists from around the world are flocking to cities around the peninsula to participate in various cycling events.

This past weekend, one of the biggest cycling events in Korea kicked off in Incheon. The Tour de Korea is in its sixth year and has grown immensely since it first began. It gained international recognition when Lance Armstrong participated in the event in 2007. The competition spans over 8 days and covers about 1,500 km. There are two courses: one for professionals and a less intense version for residents and visitors who are able to pass a pre-test.

I was fortunate enough to attend the opening ceremony with the Korean Tourism Organization as a foreign representative and “power blogger.” The event sounded great when I signed up, but as we headed toward Incheon early Sunday morning , I began to expect the worst, as the weather was cold and wet. Always up for an adventure, I put on a happy face… and a poncho. When the buses arrived in Incheon, we located our bikes and began pedaling toward the event. 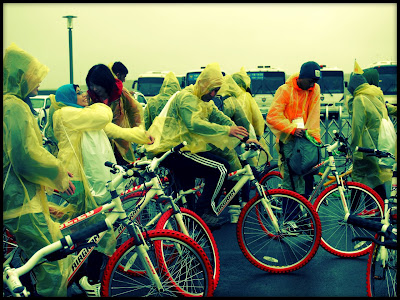 International participants brave the rain to cycle in the opening ceremony of the sixth Tour de Korea.

Lee Myung-bak, the president of South Korea, was in attendance so security was tight. I got a good laugh when I had to go through a metal detector with my bike in tow. As we stood waiting for the event to start, an accomplished looking gentleman pulled Marie, my bike buddy for the day, and I over to various people, including the Sports Director of Korea, introducing us and making sure those people had their pictures taken with us. We definitely felt important but thought it comical, as we knew we were only being introduced for photo op purposes. Still, it was fun. Soon, the president arrived and the events began. The introductions were in Korean so I’m not sure of everything that was mentioned but did know that the newly constructed cycling trail that leads from Incheon to Busan was promoted. There was a short parade of interesting bicycles and we were led to the starting line to watch the teams of cyclists begin the race. 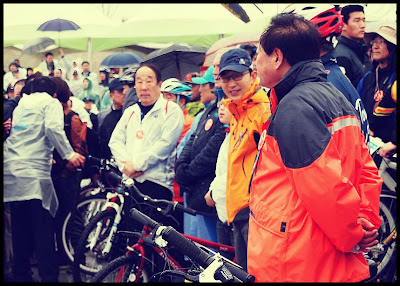 Lee Myung-bak, the South Korean president, was in attendance (in orange jacket and hat)… and was smiling for my camera… I think! 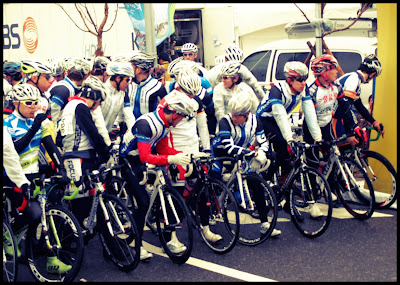 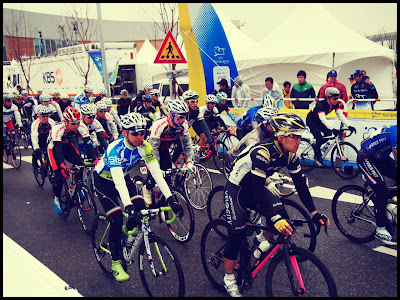 I was a part of the president’s cycling group so I got to take a detour and check out a few of the booths on display at the festival, which ended up being one of the highlights of the day. I didn’t get to see many of the tents, but each represented a different region of Korea and offered various food items to participants. At this point, we were shivering, wet, and hungry so when we peeked our heads into the hanu tent, we were greeted affectionately by the vendors. We weren’t there a minute before we had glasses of makegoli (traditional rice wine) in our hands and chopsticks of grilled mushrooms and hanu (the highest grade Korean beef) being held to our mouths. When I was first hand-fed in Korea, I thought it slightly awkward. However, I’ve come to find it endearing and warm. The hanu was incredibly delicious, as well. 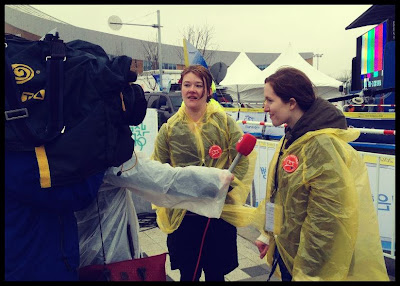 Marie and I were interviewed by Arirang TV about the event. (Photo credit: Nakayama Sachiko) 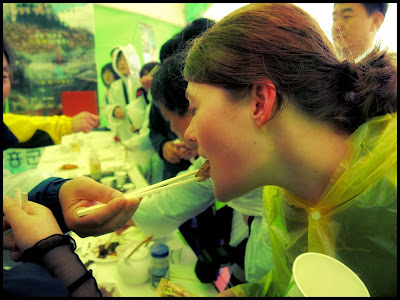 Being hand-fed in Korea is a gesture of great warmth and hospitality… even more so when expensive hanu is being offered.

We biked on, greeted by cameras and onlookers and lots and lots of yellow-vested police officers that bordered the track for the entirety of the parade. After a few more pit stops, we arrived at our lunch location and were treated to a boxed lunch compliments of Bulgogi Brothers, a well-known chain in Korea. Absolutely none of us wanted to bike on in the rain, so the buses picked us up early. Our fingers were frozen but our stomachs were full and the majority of us had an enjoyable day. 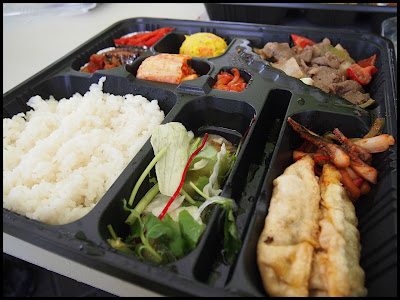 We were served yummy bento boxes from Bulgogi Brothers, a great meal to wrap up the day.

I’m definitely not a professional athlete. I don’t even consider myself in shape. But with all the nice trails Korea has to offer, I’m definitely going to try to give cycling a shot this year. I’m sure I won’t get the chance to cycle with a world leader again, but at least I’ll get some fresh air and a chance to further enjoy the natural beauty of Korea.