By Mimsie Ladner on Sunday, January 14, 2018
Once a resting shelter and vacation destination for kings, the grounds of Hwaseong Haenggung in Suwon, South Korea are now a site where locals and tourists can learn about Korean royal history and culture. Despite recent renovations, every inch of the palace has a story to tell. So much so, in fact, that when I visited, I could almost sense the spirits of Korea’s dynastic leaders luring me back in time for a glimpse into the country’s captivating past.

One of the first things I noticed about Hwaseong Haenggung was that it was quite small compared to other royal structures I have visited throughout Asia.  I soon learned, however, that what the palace lacks in size, it makes up for in grandeur. 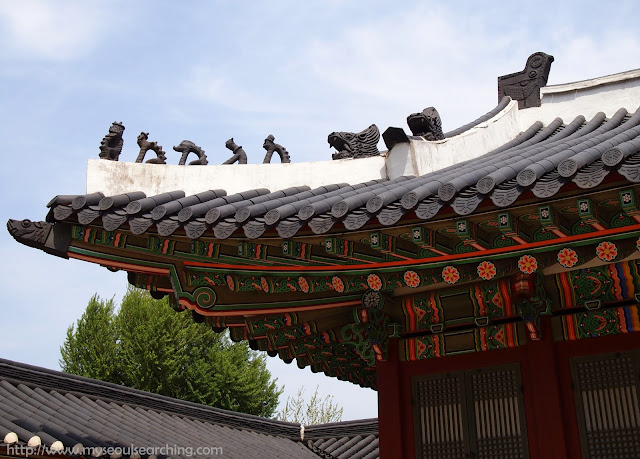 Unlike the palaces of Seoul, each room of the complex is decorated in the style of the period in which it was first constructed.  Pots and pans hang on the walls of the kitchen and a desk topped with hanji, Korean paper, and writing supplies sit in the corner of a study. 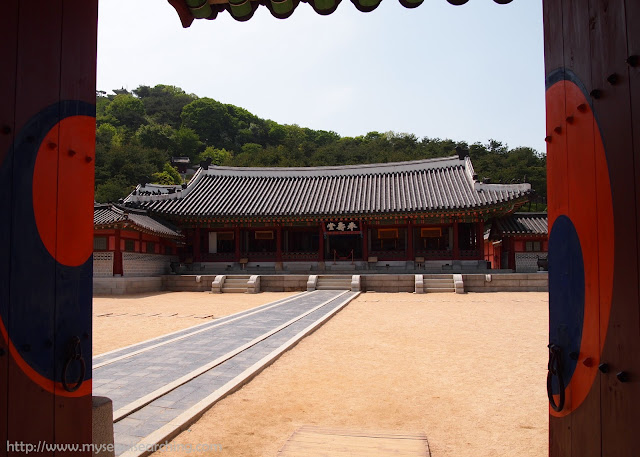 There is even an appetizing spread of royal cuisine, commemorating the historical 60th birthday celebration King Jeongjo held for his mother. Had the food not been plastic, I may have been tempted to steal a few bites. 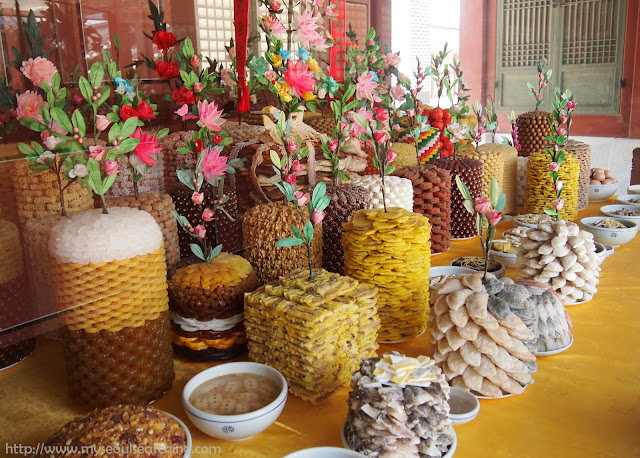 The props and furnishings, which include mannequins dressed in traditional garb, bring the palace to life and allow visitors to experience what the Joseon Dynasty was like in all its splendor in the early 1800s… even during its darker days. 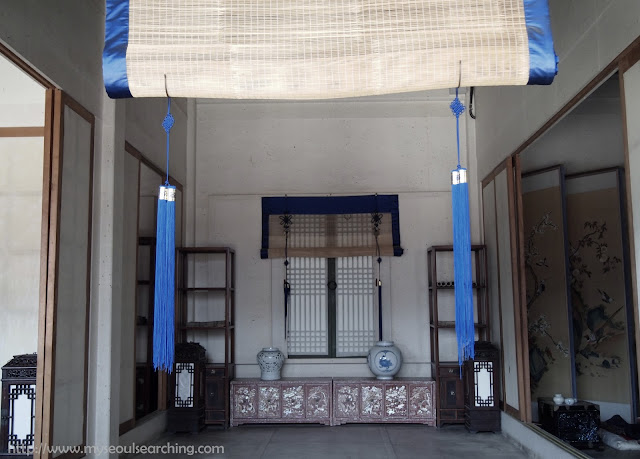 Hwaseong Haenggung was built by King Jeongjo to restore the honor of his father, Crown Prince Sado. The Crown Prince, who suffered from extreme mental illness, was killed by his father who declared him unfit to be king. Sado met an unfortunate fate of being sealed alive in a wooden rice box until he died of starvation. This tragic but enthralling story is memorialized at the palace today in the form of replica rice chests that can be crawled into by undaunted tourists. 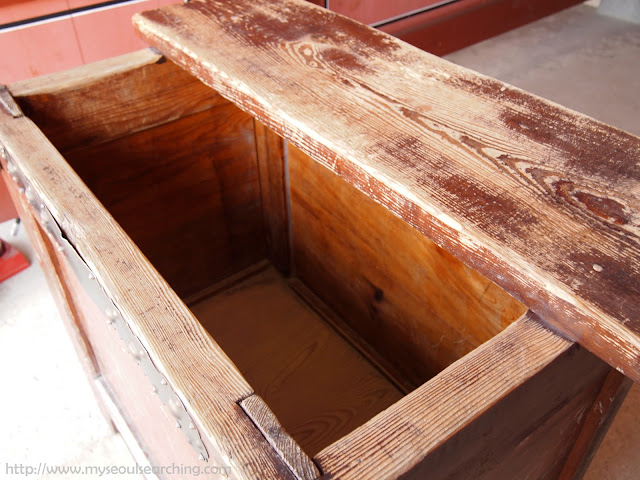 Inspired by Jeongjo’s filial piety, I passed on the rice boxes and headed over to the palace’s wishing tree in hopes of securing my own parents’ happiness for the future. Legend has it that the 600-year-old tree has protected the city of Suwon even before its fortress gate was constructed. Nowadays, people tie their written wishes on the tree in hopes that its magical powers grant their desires. 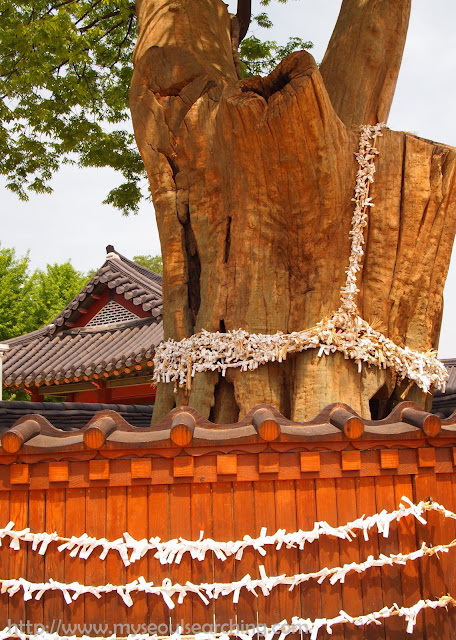 A group of giddy high school girls giggled as they scribbled down their wishes and I wondered what they might be. Good scores on their exams? A trip across the world? A date with a member of a Super Junior? I would never know, but I smiled, thinking that girls of the same age most likely had very similar wishes during the Joseon Dynasty; I suspect, however, cute noblemen were the heartthrobs of dynastic times. 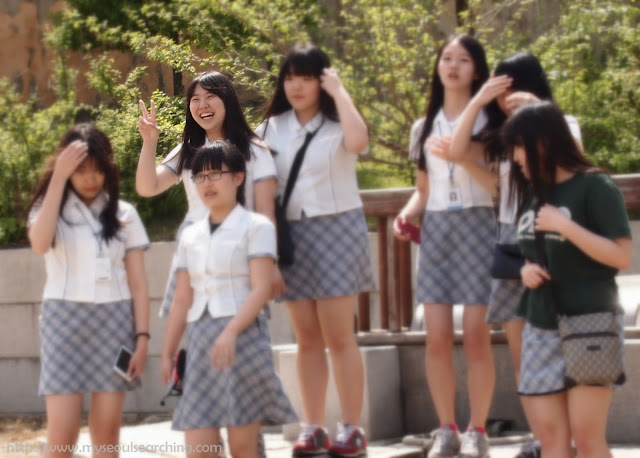 After wandering the palace grounds, the midday heat became too much to handle. I found my way to the rear of the complex and walked uphill into a verdant wooded area. Seeking refuge from the sun, I continued on past lookout posts and through bushes of magenta azaleas in full bloom to a colorful gazebo that offered a striking view of Suwon.

Although the tiled roofs of Hwaseong Haenggung reflected the city’s royal history, the skyline of buildings and billboards brought me back to modern day. I left Hwaseong Haenggung believing that time travel is possible after all, if only for an afternoon. 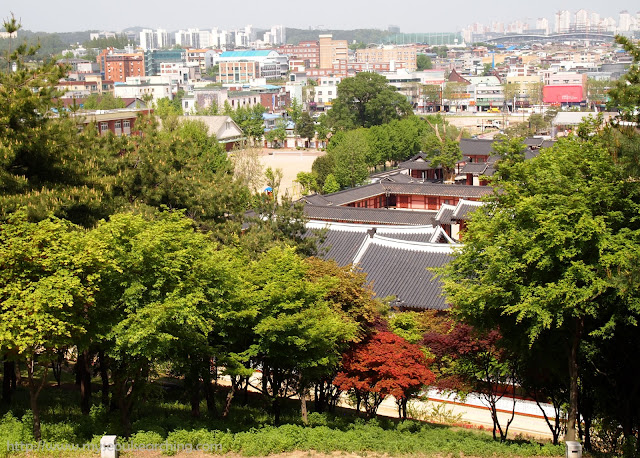 
Words and Photos by Mimsie Ladner of Seoul Searching. Content may not be reproduced unless authorized.