By Mimsie Ladner on Sunday, September 27, 2009
Some travel to see the world. I think it’s more important to travel to learn something, whether it be to speak a new language or play a land’s traditional instrument, to broaden one’s mind and capabilities. When planning my trip to Thailand, I decided that I, too, would attempt to further my own knowledge and ability. Considering my passion for food, taking a cooking class seemed to be the most obvious way to do so. I had been looking forward to this since my arrival in the country and the morning had finally come.

Like other tours, I booked a spot in advance with Silom Cooking School. After looking at other cooking classes, I found this one to be the best value (only 1000 baht/$30) for a 4 hour class in which students learn how to cook 6 different dishes. The program exceeded my expectations, even upon my arrival to the meeting spot, where our instructor, Nusi, greeted us with a flamboyant enthusiasm. After everyone had arrived- we had a fantastic group- we were each given baskets and were led to the nearby market.

Nusi walked with us and explained how to find the best food for the best price. He pointed each ingredient out and gave a bit of information about it (how to tell if it’s ripe or what makes it different from other items) before putting it in one of our baskets. We were able to sample some foods, like the just-made palm sugar. I snapped some pictures, but none of them could do justice to the vibrancy of the market. I wish there were a camera that could capture smells and tastes. As much as I love photography, the images of the market only encompass a fraction of the experience. The coconuts shells being ground… the scent of curries being mixed… the freshness of each item of produce.. even the odor of fish being put on ice… those things are what made this such an experience. I suppose this is true for all travel experiences, but it proves especially true in animated areas, such as markets. 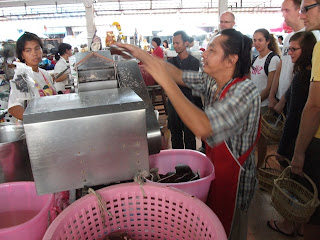 Once we arrived in the adorable “classroom” we were instructed how to clean and cut each ingredient, based on what the recipes called for. Our group bonded as we cut lemongrass, sliced ginger, and washed limes. We then gathered in a room, put on some colorful patch-work aprons, and learned how to prepare our first dish, Pad Thai. We sat on the floor as we gathered and made final preparations to the ingredients before taking them to our individualized cooking stations. We then cooked the dish on a gas stove with traditional Thai utensils. It was actually incredibly easy and very fast. We then enjoyed our noodles and moved promptly to start cooking the next dish. 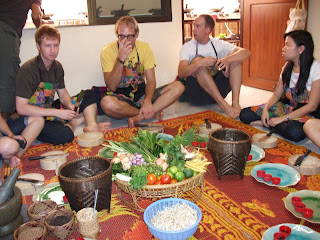 Our group gathers to prepare ingredients for making Thai dishes. 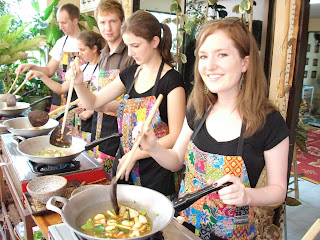 Cooking up that good grub.

All together, in addition to the Pad Thai, we learned how to make coconut milk, Tom Yum Gung (a delicious spicy shrimp soup), green curry with chicken, Laab Gai (a northern Thai chicken salad served over sticky rice), and rubies in coconut milk (water chestnuts with tapioca starch boiled in water- a nice dessert). I felt most accomplished in making the green curry paste, as it was very difficult and time consuming. After adding the ingredients into a stone mortar, we all took turns breaking a sweat by pounding the herbs and spices together. After about a half hour of doing this, it was finally at the right consistency. I was able to learn the traditional way of making curry paste, but you better believe I’ll be getting the pre-packaged stuff when making Thai dishes in the future. 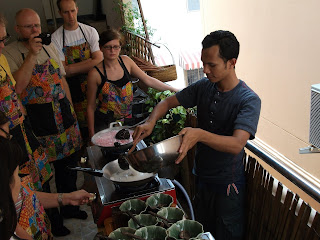 Nusi instructing us how to make ‘rubies in coconut milk’, a Thai dessert.

We stuffed ourselves with our culinary masterpieces. The portions were huge and some decided to doggy-bag it, but you know I finished it all on the spot. I was talking to Rhea, a Filipino girl in my group, and she brought up a good point. Though activities such as these are lots of fun, the real experience is sharing them with new friends and people from all walks of life, as we had during the day. I loved learning to cook, but the most fun memories from the afternoon involved those of our group breaking out into a percussion performance with the utensils and laughing at our hilarious instructor’s jokes. She was definitely right.

Afterwards, I headed back to MBK to pick up the computer programs I hadn’t had enough money to buy the day before. I made sure to make it an in-and-out visit as to not be tempted to spend any more money. On my way out, I witnessed a very interesting sight. Hundreds of teenagers were gathered around barricades where auditions for a reality television show, Hello Korea (think So You Think You Can Dance meets Asia), were being held. There were groups practicing choreographed dance moves off to the side, all dressed in vibrant costumes. I was amazed at how many girly sailor costumes there were and even more amazed at the fact that the majority of those wearing them were ladyboys… teenager ladyboys. This aspect about Thailand contributed to the majority of my culture shock, as I had become so used to the extreme conservatism that defines Korea, where homosexuality is still very taboo. I guess you could say it was refreshing to see the opposite end of the spectrum. Still, it’s amazing how close two countries can be geographically but so different culturally.

The auditions proved to be wonderfully entertaining and I found myself standing there watching them for a good hour. After searching Google, I was able to find some video clips from the same audition I saw. Check them out here and here. You can decide if the Diva Dolls dancing to Britney and After School are boys or girls. All of these videos show the performers dancing to Korean pop music. It really is interesting that Korean pop music is more popular than Thai pop music, especially considering Thais don’t speak Korean, or I wouldn’t imagine they do.

After enjoying the free show, I headed to Khao San Road a final time where I enjoyed a good dinner. On my walk back to my hotel, I stopped by an unusual snack cart. Upon closer inspection, I saw that the vendor was selling a variety of fried insects. Following the first of the traveler’s commandments (“When in Rome..”) I decided to end my gastronomic adventure by ordering a grasshopper. The man sprayed some soy sauce on it and I toasted with some other girls trying it. I couldn’t really taste any flavor past the soy sauce, so it wasn’t bad. The texture was okay as well, though the legs could easily be identified when chewing. 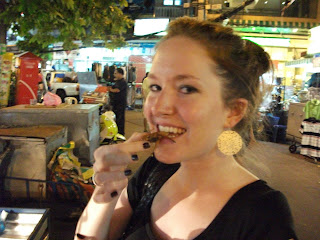 Grasshopper doesn’t exactly taste like chicken… but it doesn’t taste bad, either.

I packed up my ridiculous amount of luggage and woke up at 4AM on Sunday. Coincidentally, there was a taxi driver hanging out in my hotel lobby, so he loaded up my bags in the cab and headed off to the airport. I wanted to sleep, but he was quite chatty and insisted on blaring an old TLC album. So, there in my last hour in Thailand, the sun not yet having risen, I sang “No Scrubs” with an old man who spoke very little English. Though bizarre, I felt this was a perfect ending to my trip in the quintessentially colorful, mysterious, strange, and friendly country of Thailand. It was then back to reality… though I still find difficulty in considering my life in Korea anything close to reality.