By Mimsie Ladner on Monday, October 5, 2009
After returning to work after a week-long adventure-packed week abroad, I knew that I would be programming rather than teaching, as per the new rule created from the increased swine flu paranoia. Considering programming consists of anything from writing lesson plans to coloring Halloween posters to making balloon animals, I was completely okay with this. In fact, I welcomed the break to refuel after my long week. You can imagine my excitement when I learned that I would only have to show up to work for a few short days. I hadn’t realized it before, but the Korean holiday, Chuseok, was upon us; thus, I would be enjoying an extra long weekend.

Some coin Chuseok, “Korean Thanksgiving,” though I don’t understand why. Though the holiday is encapsulated by concepts of love, family, and food, its roots are different than those of the overly-commercialized American holiday. Chuseok spans three days, beginning on August 15th of the lunar calendar, when the Full Moon Harvest takes place. Chuseok’s orgin dates back about two thousand years to the time of the Silla King Euri, who ruled during the Three Kingdoms period. At the time, he desired to expand the weaving industry and organized a nation-wide weaving contest, in which the losers were to prepare certain foods for the winners. It soon developed to be a time to honor ancestors with newly harvested grains and fruits.

Even today, there is no corny holiday decor plastered on department store windows. There are no sales pitches or discounts on commercialized memorabilia. In fact, I highly doubt there’s even a greeting card designated for this day. What one does find is generosity. I decided to do some grocery shopping at Lotte department store a few days before the holiday weekend and was taken back by the crowds taking over the produce section and lined up at the check-out counters. I soon realized that these people were racking up on items to give to their families and loved ones to celebrate Chuseok. Of these items, gift sets seem to be the most popular picks.

Let me just say… there’s a gift set for everyone. A gift set of flawless fruit could run you about 200,000 won ($150USD) and a lobster box set (literally a box with a pair of lobster) could cost you even more. SPAM gift sets were plentiful, as SPAM is often seen as a hot commodity here; it is seemingly more expensive in Korea. From my observations, Koreans place functionality and practicality as priorities when giving a gift and who can blame them? I hate giving (or receiving) a gift that I know will never be used. Therefore, I could only be grateful for the set my school gave me as a Chuseok gift: a set of eight tubes of Korean toothpaste, shampoo, conditioner, and bar soap. 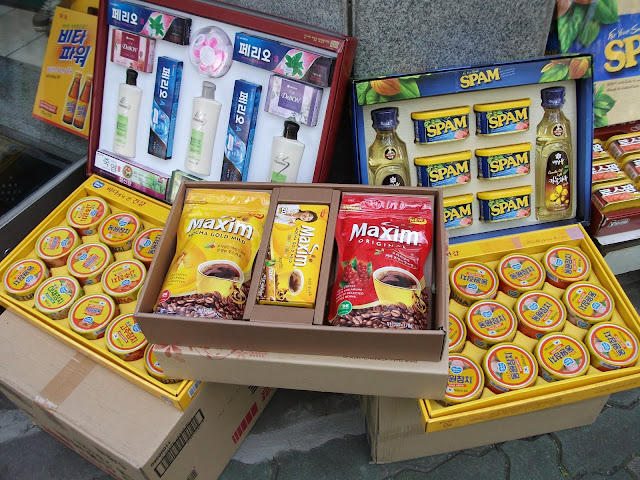 Gift sets on sale during Chuseok. Of these, SPAM seems to be the most popular.
Gifts aside, Koreans spend the holiday with a focus primarily on family. Families travel to their hometowns to spend time with grandparents and family members. Anytime Koreans gather in groups, hearty eating is involved; the females of the family often make a traditional meal. This meal usually consists of japchae, bulgogi, and various fruits. Just like our Thanksgiving would be incomplete without the turkey, Chuseok would not be right without songpyeon, full moon rice cakes stuffed with sesame, beans, chestnuts, rice flour and newly harvested grains. And might I add that they are delicious! Families then visit the graves of their deceased ancestors to remember and honor their past family. 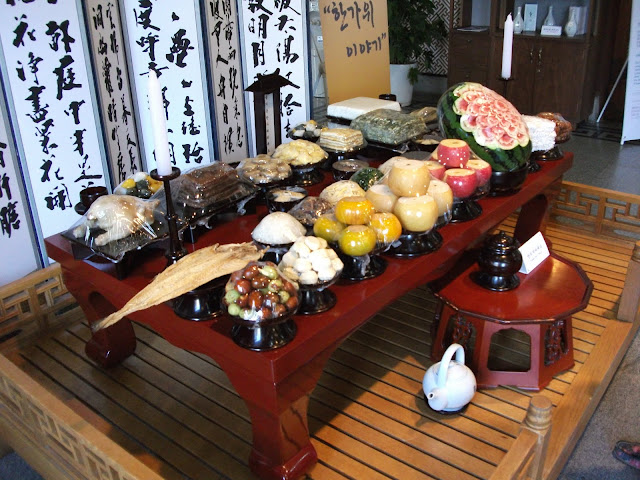 A traditional Chuseok meal on display at the Korea House.
As with most holidays, the majority of non-franchised stores and restaurants close and there is a bit less traffic, at least here in Seoul. I had been told that Seoul would temporarily transform into a ghost town; I soon learned this was not the case. There were plenty of events going on throughout the city. On a whim, I headed out to the Namsangol Hanok Village in Chungmuro. Though it was packed with people, there was plenty going on, including traditional games once played during Chuseok. There was kite flying and mask making for the hanbok–doned children in addition to drumming and dancing performances. An old man made traditional Korean popcorn while teenagers competed to see who could pound rice cakes harder. There were also exhibits of a traditional Chuseok meal spread at Korea House, near the hanok village. 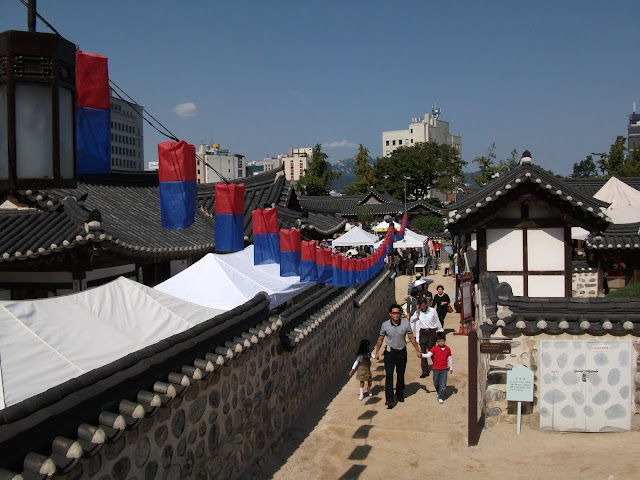 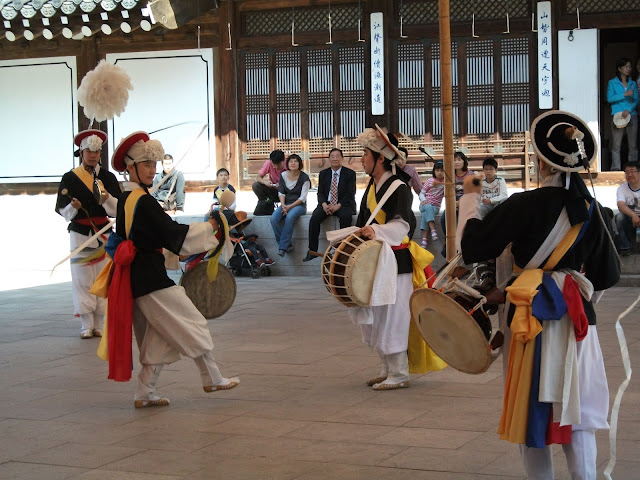 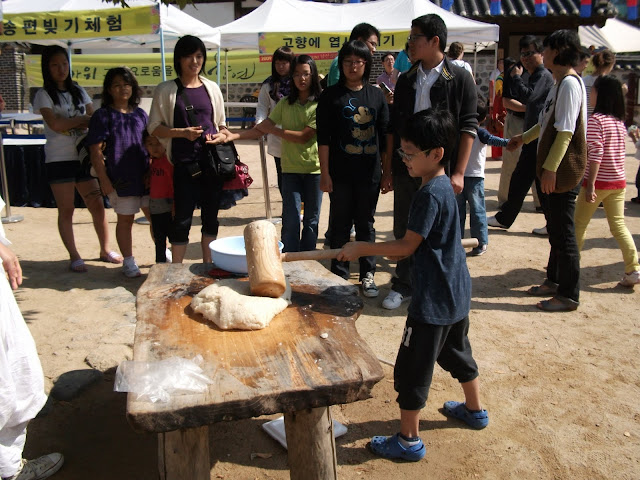 A young boy practices making rice cakes.
I had been expecting to see only foreigners at the Hanok Village, but happened to only see a few. Instead, almost all of the visitors were Korean families, which I thought was pretty cool. In a city that continues to modernize daily, it is nice to see families returning to their roots and preserving and passing on traditional culture. I can only hope that Chuseok, a truly meaningful time of the year, can stay true to its roots… and never find its namesake on a Hallmark card.
Information:
The Namsangol Hanok Village is open daily (except Tuesdays) from 09:00-21:00 (Apr-Oct) and 09:00-20:00 (Nov-Mar).  To get there, take the Seoul subway to Chungmuro Station ( Lines 3&4, Exit 4).  Walk along Hanongmaeul-gil st. for 5 minutes.
2
Previous Post
Next Post