Camping and Jams at the Rainbow Island Music Festival

By Mimsie Ladner on Monday, June 17, 2013
Nami Island is, without a doubt, one of my all-time favorite Korean attractions.  Sure, it’s touristy, but with good reason.  The island’s stunning scenery and artistic atmosphere make it an ideal destination for nature lovers and design enthusiasts alike.  Because Namiseom is a bit of a journey from Seoul, I’m not able to get out there as often as I’d like; so, when the Korea Tourism Organization offered me tickets to the island’s annual music and camping festival, I jumped at the opportunity and figured it was the perfect excuse for making the two hour trip out to Chuncheon.

The Rainbow Island Music and Camping Festival was started in 2011 and past lineups have included international headliners like Jason Mraz, Christina Perri, and KT Tunstall.  In just two short years, the festival has gained a reputation for being one of the country’s best outdoor celebrations of music.  One-day and three-day tickets are available for purchase each year. 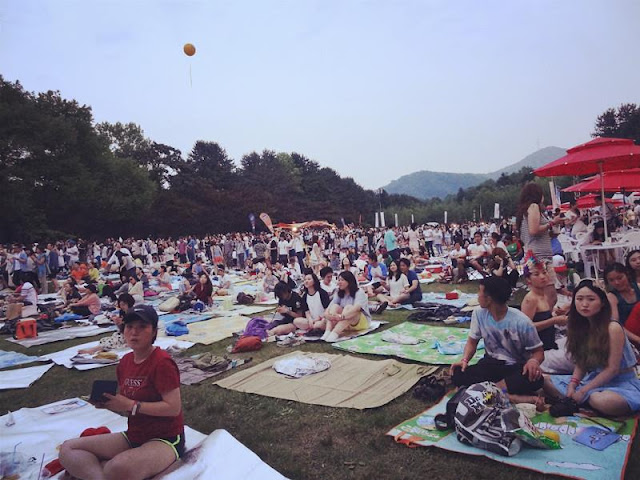 In addition to promises of amazing music, the festival is one of the only weekends of the year when camping is allowed, as to preserve the island’s ecosystem.  Festival-goers holding three-day tickets can opt to reserve camping spots, either by renting the festival’s tents (which include sleeping bags, lanterns, and mats) or bring their own tents.  Both options include access to a number of showers.

Although there are a number of ways to get to Nami Island, my friend Wang Min and I decided to book bus tickets from Dong Seoul Bus Terminal to ensure that we had a seat.  Because we were set on camping and chose to bring our own equipment, we didn’t want to get stuck on a crowded subway with a multitude of heavy bags.  Once we arrived at Chuncheon Station, we hailed a taxi to the ferry dock where tourists were already lined up in massive crowds. 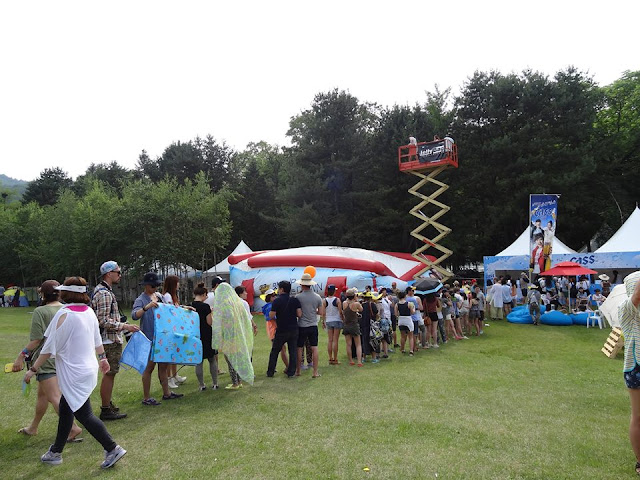 We picked up our tickets, hopped the ferry (which was included in the price of the ticket), and quickly arrived on the island.  We were glad to find out that the festival was far less crowded than the remainder of the island, as it was off-limits to those without tickets.  Our bags were checked and we were a bit upset to learn that cans and bottles were not allowed on the grounds.  I’m not sure if this was an effort to prevent drunkenness or to help the environment, but they were quite strict (though friendly) about it.

Min and I located a nice spot of flat land in a shaded area on the designated camping ground.  We attempted to set up our tent, but as neither one of us really knew what we were doing, we were less than successful.  Fortunately for us, our friendly neighbors, who were obviously well-versed in tent construction, came to our rescue with their hammers and muscles.  This was only the first of many gestures of hospitality and friendliness we witnessed during the weekend. 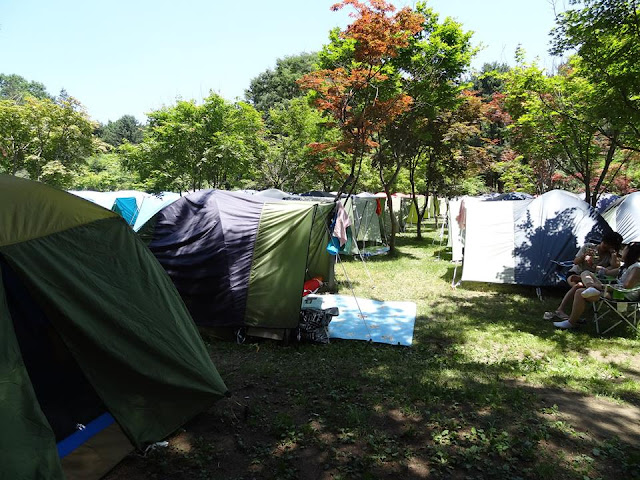 In fact, as we walked around the festival grounds, I began to notice that the mostly Korean crowd were not the typical folks you see on the streets of Gangnam or Myeongdong.  They were obviously more free-spirited and easy going, many of them dressed in bohemian garb.  There were even a few vendors selling tie-dyed apparel, incense, and hand-made jewelry.  The whole place exuded Woodstockesque vibes, sans marajuana or hallucinogens, of course.

We loaded up on some free goodies (sunscreen, snacks, and fans) provided by sponsors of the event and decided to find a spot to enjoy the music.  Although the performances (all 40 of them) are staggered throughout the weekend on three different stages, the music can be heard from just about any point of the festival grounds, making it easy to relax in one area if you’re more interested in chilling out than getting front row spots.  The Rainbow Stage was the biggest, surrounded by a slew of food and drink vendors and a monstrous trampoline-like contraption in which guests could jump on after being lifted by a machine.  The activity was sponsored by Cass Light (“Taste Up, Calories Down”).  Now that’s clever marketing, if you ask me. 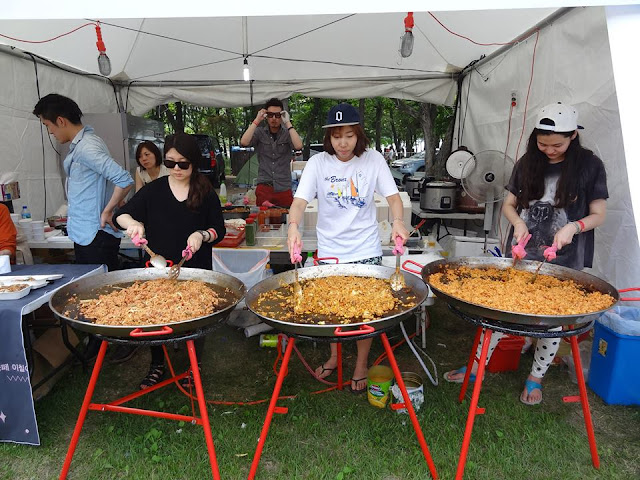 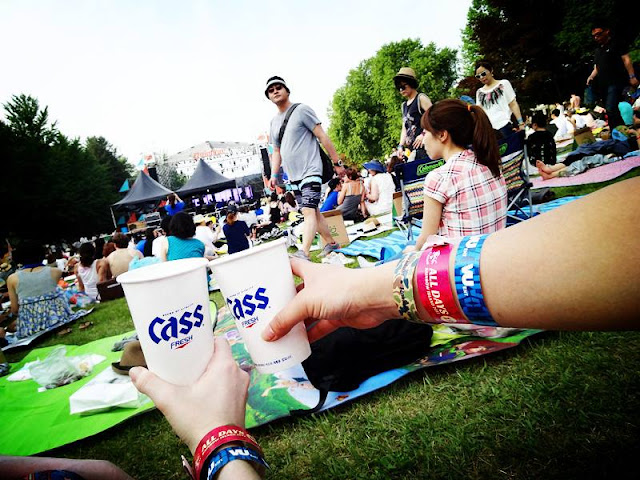 We listened to a few of the Korean bands perform upbeat hits, which were all good and fun.  It was entertaining to watch fellow concert-goers let loose and dance around carelessly.  British rockers Travis, known for their hits in the 90s, were the headliners and, to my surprise, had a huge Korean fan base present.  The band’s music was good, though they came across as awkward when interacting with the audience.  Some other friends of ours joined us during their performance and we all hung out there well into the night after it was over. 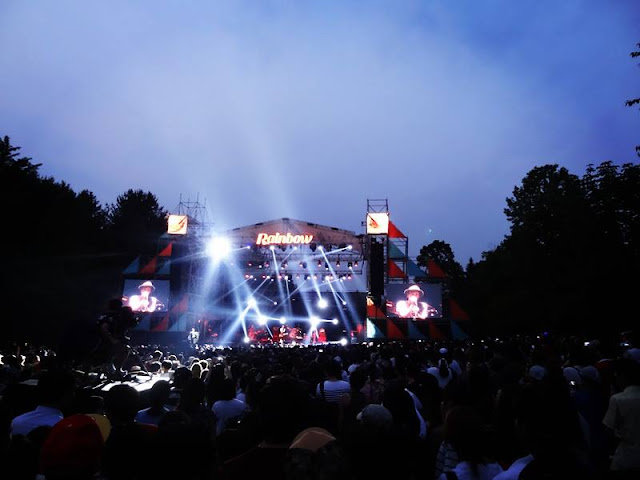 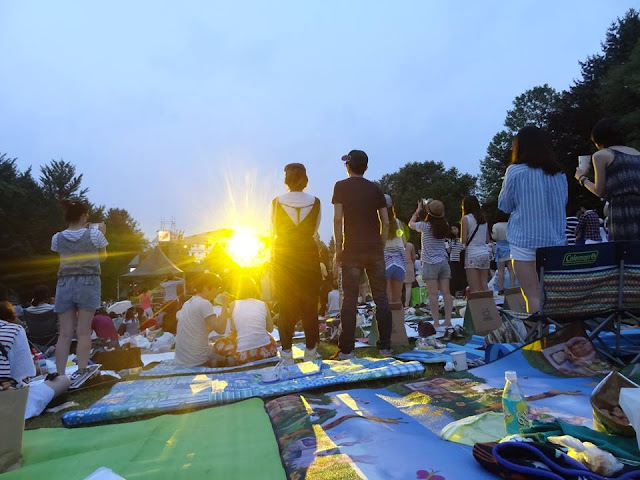 Finally, the exhaustion set in and we went our separate ways to our tents.  On our way back to the camp ground, we passed the Island Stage which was set up with a DJ performing for a group of hardcore dancers.  Unfortunately for us, the DJs played on until at least 5 in the morning, keeping us from getting a wink of sleep.  I know people pay for a weekend of music, but it seemed a bit late to have the it so amplified. 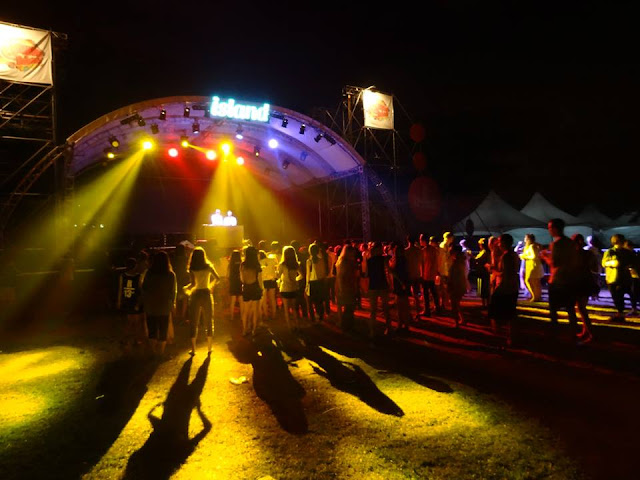 Despite not getting much sleep, we got up feeling alright and decided to take it easy the next day.  As we had both been to Namiseom before, we opted out of playing tourist and instead enjoyed a picnic breakfast and laid out on one of the island’s many grassy spaces.  Our friends, on the other hand, took full advantage of the island’s amenities, taking a tandem bike around the island and even going zip-lining, proving that Nami Island truly has something for everyone.

Before we knew it, it was time to catch our train back to the city.  We packed up our tent (which was so much easier than setting it up) and said our goodbyes to Namiseom, thankful to have enjoyed a relaxing weekend of music, food, and friends in the beautiful Korean outdoors.

Information:  Although the dates for the 2015 Rainbow Island Music and Camping Festival have yet to be posted, you can find updated information including dates and ticket prices as it becomes available via their official website here.  For information on how to get to Nami Island, click here.