By Mimsie Ladner on Wednesday, February 7, 2018
Every year, over a million people flock to the sleepy town of Hwacheon to participate in the Sancheoneo Ice Festival. The festival, which takes place annually, is consistently voted one of the best local festivals in Korea and was even named one of the “Seven Wonders of Winter” by Lonely Planet.

I participated in the festival back in 2010 but much to my dismay, was unable to catch any sancheoneo, the region’s prized mountain trout. I decided to try my luck again and headed out to the pristine streams of Hwacheon for another round of ice fishing. This time, however, my luck seemed to improve, as did my willingness to explore the rest of the festival grounds. As it turns out, the Sancheoneo Ice Festival is much more than just an ode to the region’s fish… it is, in fact, a celebration of the beauty of winter in Korea.

For those interested in braving the cold temperatures, be sure not to miss any of the festival highlights listed below.

Ice fishing, the draw of the festival, is an entertaining activity despite the excruciating patience it requires. Fortunately for foreigners attending the festival, there is a designated space which is far less crowded than the general areas. Additionally, there are many volunteer interpreters who are more than willing to instruct those less versed in the art of ice fishing on how to use the rather unusual pole and are quick to assist in unhooking and bagging caught fish.

There’s nothing quite like the scene of thousands donned in brightly colored coats and hats bobbing a single line and lure up and down in a hole on a thick layer of ice… except for being part of it! (Tip:  If you prefer to sit while you fish, bring along a small chair and mat that can also be used to keep your personal belongings dry.) 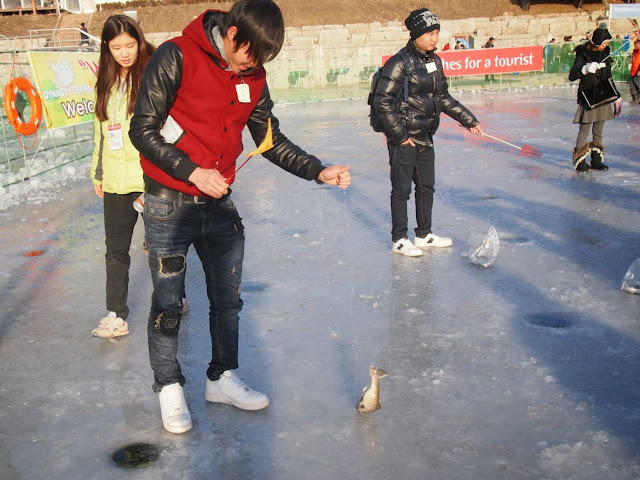 For the less patient, bare-handed fishing allows for a more exhilarating experience. Participants trade in their coats for t-shirts and shorts and are given five minutes to catch up to three fish with their bare hands, all the while storing them in their shirts.

Despite the freezing temperatures, all the participants seemed to be having the time of their lives. Especially the one guy I spotted who managed to catch a trout with his teeth. 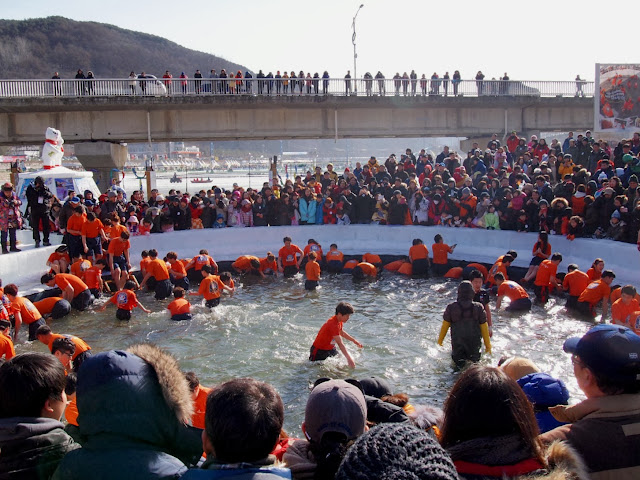 After catching the trout, participants bring them to one of the barbecue stations set up near the ice fishing areas. To save time, the fish are essentially traded with staff for fish that have been cleaned, cooked and wrapped in foil. All diners have to do is warm them up on one of the already-prepared BBQ pits and eat (don’t forget to bring your own beverage!)

The atmosphere is unique and the delicious flavors of the fish make the cold far more bearable. For those that prefer to eat their fish raw, there are separate vendors that will prepare the trout sashimi style. 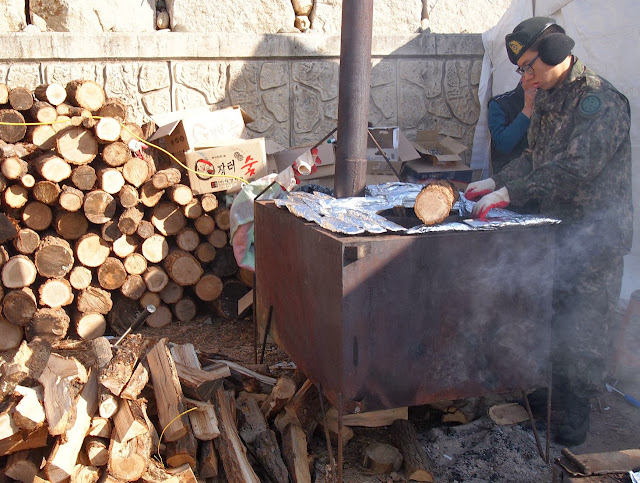 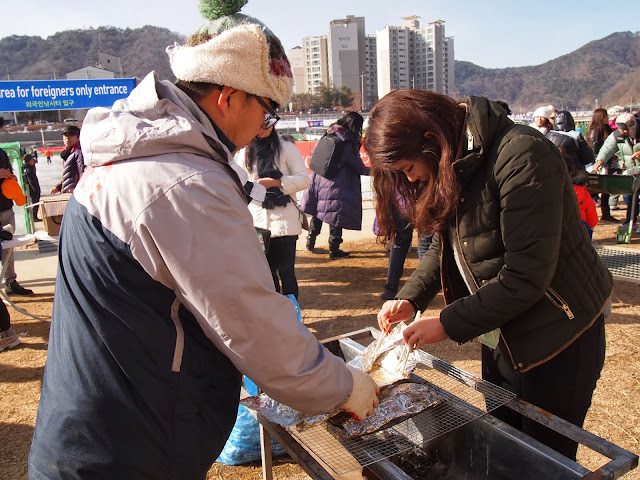 A walk around the festival grounds is a must, if only to see the impressive snow sculptures. A “castle” made entirely of ice and illuminated by bright lights can also be explored. 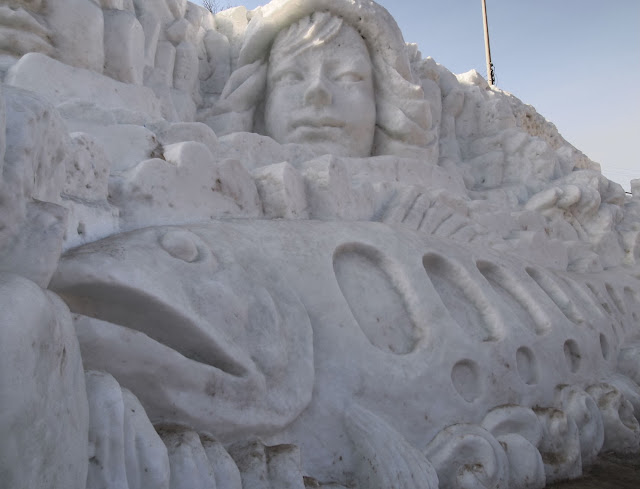 A mix of couples, friends, families and soldiers show off their creative sides by entering homemade sleighs into a race to compete for monetary prizes. Most of the participants went all out, donning ridiculous costumes and taking on personalities to match the concepts of their sleighs. Some of the more interesting entries this past weekend included a Roman chariot, a guy dressed up as a computer and an iridescent sancheoneo. 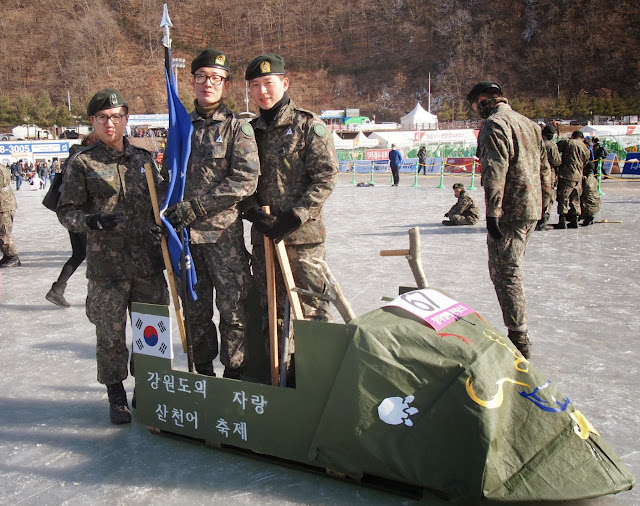 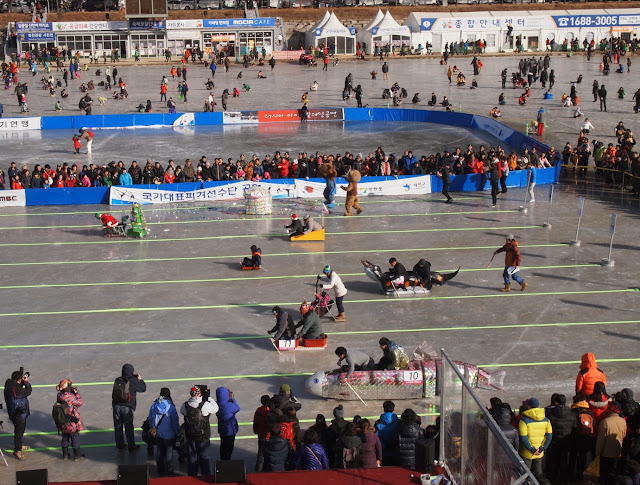 For those wanting even more action, there are many activities to partake in. Ice bikes, ice soccer, and ice skating are a few of the tamer programs available while the ice ATVs and ice go-carts cater to the adrenaline-junkies. These activities are all priced separately and it is advised to purchase tickets first thing in the morning, as the lines can get long in the afternoon. 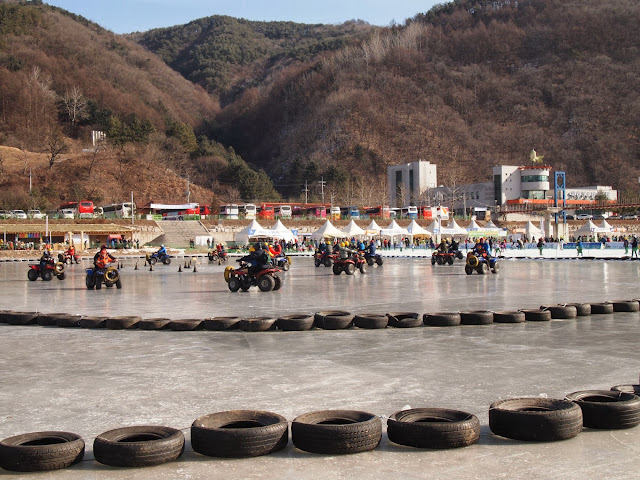 Regardless whether you catch a fish or not, good times are guaranteed at the Sancheoneo Ice Festival. Like all festivals in Korea, there is plenty of good food to be had (try the roasted rice cakes with honey!) and there are a number of musical performances to be enjoyed throughout the day. So, grab your scarf and gloves and head out to Hwacheon to experience good clean winter fun!

To Get There:  Take advantage of the Gangwondo-sponsored shuttle buses for foreigners.  For only 10,000 won, the bus will take you from Gwanghwamun Plaza in Seoul to the festival grounds and back.  For more information and to make reservations, click here.  To make your own travel arrangements from Seoul or other cities in Korea, click here for a list of routes and directions.

Festival Hours:  Most events run from 9am to 6pm.

Admission:  Admission to the festival grounds is 8,000 won ($8USD) for foreigners and includes a free fishing pole or 5,000 won food voucher.  Activity costs vary and start at 5,000 won.

Although the 2018 Sancheoneo Ice Festival has already passed, the very similar Pyeongchang Trout Festival is on until February 25. Get more information here.