And We’re Not Even Michael Phelps…

Let’s just make this clear… Koreans can eat. Eat in extremely large portions for an exceedingly long amount of time. With the exception of some children, the majority of them remain stick thin. It’s unreal.

The Korean dining experience is pretty fantastic. At most traditional restaurants, customers remove their shoes and sit on the floors. These days, I tend to carry around an extra pair socks for this reason. Here, they use flat metal chopsticks, unlike the wooden round chopsticks used in other parts of Asia, and in the sushi restaurants at home. Unfortunately, I have not become completely accustomed to this yet, as I am known to drop one or both at some point during the meal, thus making a complete mess of myself. I’m getting better though.

Food is a way of life in Korea. So much so that one of the most popular live performances amongst Koreans and foreigners, NANTA, is an ode to the greatness of food and it’s ties with Korean culture. Similar to America’s “Stomp,” NANTA follows four chefs in a kitchen as they prepare for a traditional wedding ceremony. I was hesitant to cough up the $50 for the ticket, but my Korean friend insisted that we would be VIPs. She did not disappoint. We took our seats in the front row, splitting center stage. Hands down best seats in the house.

The play opened with the actors in a traditional and ancient Korean kitchen, making rhythmic beats and music with the various cooking tools. This was the theme throughout the show’s entirety, though many more elements were added in. There was plenty of chopping, fire breathing, dancing, quartet singing, and slapstick comedy. One of my favorite scenes involved a martial arts-style fight between two of the characters in which one of them used a pair of cooking whisks for nunchucks. There was actual cooking involved, too, and during one of the chopping scenes, I ended up with a few cabbage leaves in my lap. The actors were very good at involving the audience, and I ended up being the butt of one of the jokes, which was quite embarrassing, but I’ll save that for another day. This show was definitely worth seeing if you are ever in Seoul. 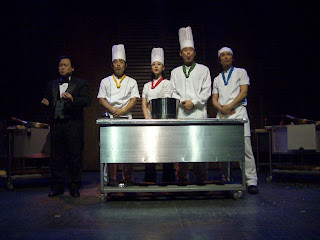 The cast of NANTA tasting their well prepared soup.

Speaking of food, my Korean recruiter invited me and a few co-workers to grab a couple of drinks last night. Little did we know that this evening would turn into an epic adventure of food binging. On our way out, we decided to get some dinner at a galbi restaurant. Upon sitting down, we were brought plates upon plates of soups, salads, vegetables, and sauces. (Not to mention the Cass and Soju.) The first servings were so good that we decided to order a few more. We ended up consuming 10 servings of beef among 6 people. 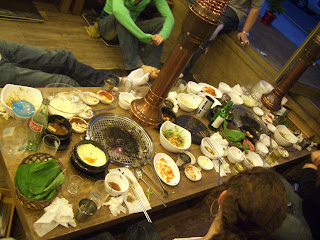 Our plates, minus the food and galbi.

If this wasn’t enough, I suggested we head to Baskin Robbins to sample the ice cream fondue for desert. I’ve been dying to try this incredible dish since I’ve been here. Who could pass up twenty mouth-watering mini-scopes of ice cream, various flavored cakes, fruit, and a melted chocolate dipping sauce. Not us! We ordered two of them, but couldn’t stop there, so bought at an additional quart of four different flavors. The cranberry cheesecake was divine. Surely people were staring, as we were acting quite drunk at this point. I guess that’s what large amounts of sugar does. 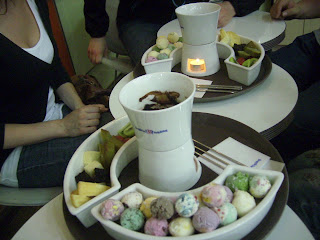 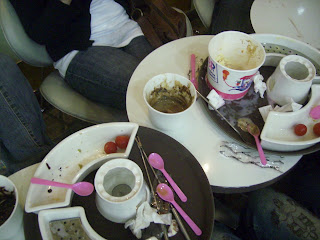 And after… note the empty ice cream quart. And for the record, tomatoes dipped in chocolate is not a good idea.

Feeling as if I were about to explode, my recruiter then said, “Pizza?” Though I thought this was joke, we found ourselves seated at Pizza Hut once he offered to pay. Two large pizzas (double cheese and pepperoni) were soon at our tables and I couldn’t resist the temptation, as I have not yet had real pizza since my arrival. 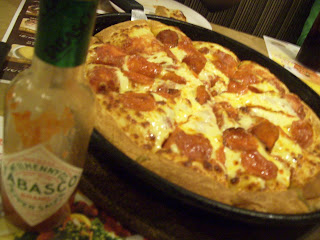 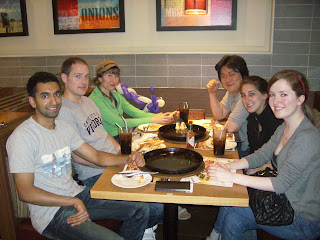 The crew, including Andrew who was called in for backup at the last four slices at Pizza Hut.

Never have I done something so fantastic and disgusting at the same time. To justify our gluttony, we walked home. Hey… when in Korea, do as the Koreans do… right?