By Mimsie Ladner on Thursday, July 23, 2009
One of the more vivid memories of my childhood is when I first learned to ride a bike. My parents had just taken off the training wheels and I was so excited when I got the bike going on the first try. Just as I was able to enjoy the wind in my hair and the smooth pavement below me, I jerked the handles a bit too far to the right and ended up in a ditch. I started screaming and soon enough the tears were running full force. I was not physically injured, nor was my bike hurt. I was extremely upset only because I was covered in the dirty water and mud. Little did I know that years later, I would be paying to get covered with it.
I registered with some co-workers to attend Mudfest 2009 with the popular travel company, Adventure Korea. Our bus left early on Saturday morning, and the weather report predicting rain had my expectations for the weekend quite low. I was in and out of sleep for the three hour ride to Boryeong/ Daecheon Beach, but I was able to enjoy the sights of the Korean countryside as it passed by. It was not nearly as beautiful as the Western European countryside I witnessed last year, but that is not to say it is without character. The roadside houses had quirky and colorful rooftops and older Korean people were hard at work, tending to their homes or rice fields in view. Riding through the lush mountains was a nice break from the pavement and neon of the city.
We arrived at Boryeong’s mud beach just in time for the military training exercises. After changing into the provided camo fatigues and black shirts, we were separated into teams (tigers and dragons) and directed in broken English to specific areas on the mud beach. When the girls were commanded to enter a roped off area for the mud wrestling event, I soon learned why I was told by friends beforehand to leave my dignity in Seoul. It was quite comical, to say the least, but after mud rugby I decided I would be a spectator of the Mud Flat Huddle Marathon Championship. In doing so, I was able to enjoy cold beer, karaoke versions of Michael Jackson, and have a much more interesting view of the “professional” athlete who led the pre-marathon stretching [see video]. Even the mayor of Boryeong was there to cheer on the not-so-in-shape foreign and the overly-into-it Korean participants. 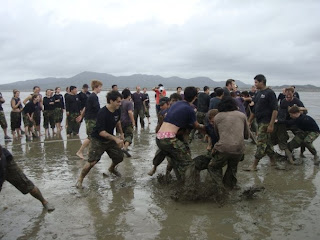 The boys mudwrestling, as a part of the military training activities on the mud flat.

After playing on the mud flat, we were brought to our minbak (Korean-style hotel room) just off the beach. We found our beds to be the somewhat padded floor (ondol), though it proved to provide a good night’s rest later on. They did have Western style toilets and a provided rice cooker, so what else does one really need? We filled our bellies with galbi and checked out the hip-hop/rave party, which took place on a gigantic stage overlooking the beach and white-capped waves breaking on the shore. Thousands of Koreans and foreigners packed the area and I have to admit, it was a cool feeling. After ducking into a nightclub to avoid the outrageous wind and starting rain, I was happy to hear the familiar “Cupid Shuffle,” “Walk it Out,” and “Stanky Leg”; for a second, I forgot I was in Korea. It was strange to be around so many foreigners. 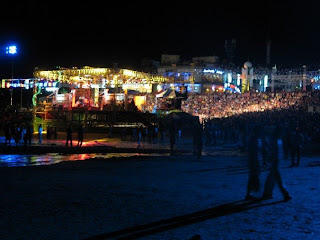 Hip-hop/rave night on the beach with thousands of spectators. (Photo from Facebook Mudfest Group)

We woke up early the next day to perfect sunny weather to check out the festival. We walked past the various tents which all featured, well, mud: mud massage, mud ceramic creations, mud jewelry for sale, mud soap (which we were given as a gift by AdvKor), and a swine flu consultation tent. Okay, so maybe that had nothing to do with mud, but that’s Korea for ya. We put our bags in the free lockers (for foreigners) and stopped by the restaurant (for foreigners) to enjoy some hamburgers. Then we were off for a dip in the ocean on the beach. It was interesting to see so many Koreans in the water, still dressed in shirts and even jeans, but everyone, especially me, was enjoying the sandy beach, the cool water, and the glorious Korean sunshine. 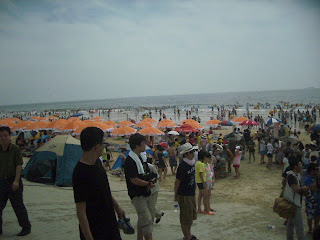 Next, we were painted with colored mud. I was hesitant to do it at first, but the mud of Boryeong is said to have special properties that make the skin healthier, so I went with it. Afterwards, we resembled a somewhat odd version of the Blue Man Group. The remainder of the day was spent at the mud jail, mud pools, mudslides, and the mud fountains. Oh, and being photographed every which way we turned. Surely, we are on a newscast or plastered on the page of a newspaper somewhere in Korea. 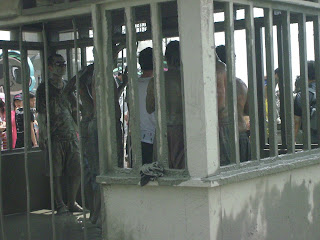 Mudfest goers get covered with buckets of mud in the mud jail. 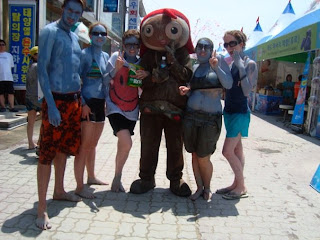 Post-painted with blue mud, posing with a Boraeyeong mud character.

Mudfest was certainly not the most conventional way to spend my time off from work, but it was an amazing way to have fun and partake in an unusual mini-vacay, even if it did mean washing my hair three times to get the mud out.