Off the Beaten Track

By Mimsie Ladner on Thursday, October 15, 2009
A helmet-less child and a middle aged man ride up the hill that I’m descending. Their motorcycle suddenly stops in front of me, just next to a closed doorway and the little boy, no older than six, demounts the rumbling bike. The boy bows toward the man. “Kamsa hamneeda,” he thanks his elder before turning and hopping over the threshold. I hear him shout something to his mother. Laundry hangs above on a clothesline and I hear a customer seemingly negotiating the price of a bundle of garlic with a vendor nearby. An elderly woman sitting on the corner depoding some sort of beans shoots me a toothless smile as I walk on. It’s little moments like these that I soon remember where I am. 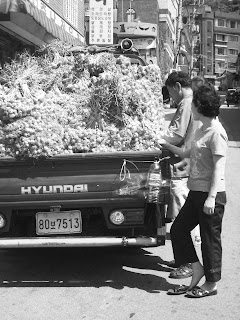 A customer negotiates the price of a bundle of garlic on an alley in Daehangro. Yes, that’s garlic!
It’s surprisingly easy to forget one is in Asia at times when the city in which you live is becoming increasingly modern with each passing day. When walking in the city, it’s impossible to ignore the westernization of Korea. Take a glance around and you will see a McDonald’s, Outback, GAP, or FedEx somewhere within view. Teenagers wear shirts displaying English messages. Beyonce or the Black Eyed Peas are usually within earshot. Still, there are places where one can escape this constant facelift of the city. Such places can only be found off the beaten track.
Hyehwa, also known as Daehangro, has come to be one of my favorite neighborhoods in Seoul. It is most well known for its theater culture. In fact, a theater can be found on just about every block in the area and there are plays of all genres performed all the time. Promoters are constantly on the look out for new patrons, passing out fliers or telling you a joke. At any given time, one can enjoy a street performance held in Marronnier Park or the near vicinity. I have seen everything from belly dancing to b-boxing to interpretive performances; such street events have a tendency to draw in crowds. Hyehwa also boasts some great restaurants, live jazz clubs, and some classy joints to get a nice glass of wine (or a cocktail in a Ziploc bag!)
Still, what I enjoy most about the area can be found within a short 15 minute walk from the central district. Recently, I found myself wandering about and started following a sign toward Naksan Park. As the music playing near the subway became more and more distant, I wondered if I was heading in the wrong direction. I continued to move forward and soon came upon a quaint residential area. Taking in the surroundings, I continued up the winding staircase, following the arrows. I passed colorful murals painted on the facades of some random buildings and they seem to fit in very appropriately with the artsy vibe of the neighborhood. 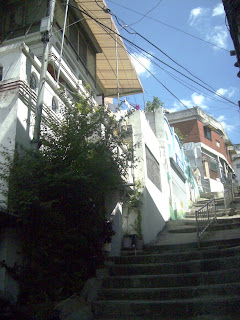 Korean homes along a flight of stairs ascending Naksan. 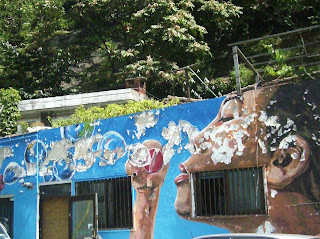 Murals painted on buildings add vibrancy to the quiet neighborhood.
After another twenty minutes or so, I found myself in the park, atop the hill on which I was climbing. Though out of shape and out of breath, the views proved to be very worth the effort and the risk of potentially getting lost. With the exception of two old men drinking soju nearby, it was extremely quiet and peaceful. The air was clear, crisp, and clean. I found myself at a fortress wall and took in the beautiful scenery below. Though it’s pushing it, I might even use the analogy that Naksan/Hyehwa is to Seoul what Monmartre is to Paris. And yes, I realize that I just compared Seoul to Paris, but it’s the same concept, nevertheless. 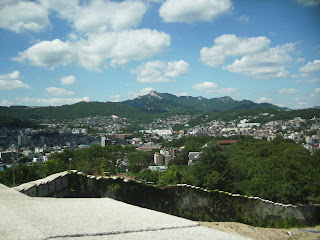 A view of the city alongside the fortress wall. 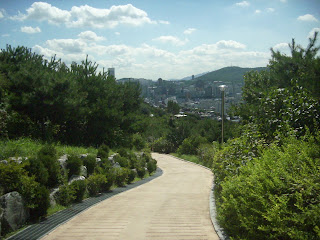 Walking the path up the mountain provides for some peace and quiet in addition to the great views.

Going back down the mountain, I took my time passing through the neighborhood once more and enjoyed the essentially Asian environment surrounding me. I passed some ajummas who generously offered to share fruit with me. A young girl washed cabbage with her mother, no doubt to later make kimchi. I was soon once again in the heart of Hyehwa and found myself ordering a green tea latte at a European-style cafe and marking down my new found escape. It’s nice, even if only for an hour, to get away from a westernized Seoul and immerse oneself into a more indigenous Korea.

What to Eat, See and Do in Buamdong