The Most Wonderful Time of the Year

By Mimsie Ladner on Sunday, November 15, 2009
This time of the year is most definitely my favorite. The cooler weather, the leaves changing colors, football games taking place, and fall fashions are a few of the reasons for my loving it so much. Still, the thing that I like most about this time of year are the multitude of holidays that take place in such a small frame of time. Anyone at home who knows me knows that I go all out to celebrate any special day on the calendar; being thousands of miles from home has no effect on this.

Although Halloween is not a holiday typically recognized in Korea, businesses are finding that holding events to celebrate the day is quite profitable. This year, leading hotels in Seoul, such as the Marriot and the Grand Hyatt, held fancy parties complete with bands, DJs, drinks, food, and of course costume contests, charging $30-$100 per person. I don’t know anyone who attended these parties, but I have read in places that celebrities often make appearances at these events. I was more interested in the bar scene, but considering I had to work the day following Halloween, my options were quite limited. Because of this, I opted to check out Club Day in Hongdae on Halloween Eve.

My Korean friend, who had never celebrated Halloween before, agreed to come along. Our first stop was one of the five Ho Bars which boasted some great Halloween decor: cobwebs along the ceiling, hanging jack-o-lanterns, creepy noises playing over the speakers, and bartenders dressed as insane asylum patients. My favorite touch was the large screen TVs showing only static. I was waiting for Samara from The Ring to crawl out. Afterwards, we met with Adam, my newfound Mississippi friend at Gogo’s for happy hour, then bought our Club Day ticket. Club Day, held on the last Friday of each month, is particularly popular with young people, both Koreans and foreigners alike. One pays $20 and has access to a variety of clubs and bars. After a few drinks, Emily and I built up the courage to put on our costumes, though no one else was wearing them. I didn’t care, and was determined to celebrate Halloween the right way. We had a blast dancing around Hongdae as a schoolgirl and ladybug. I turned in once the subways opened and got a few hours of sleep before the next festivities. 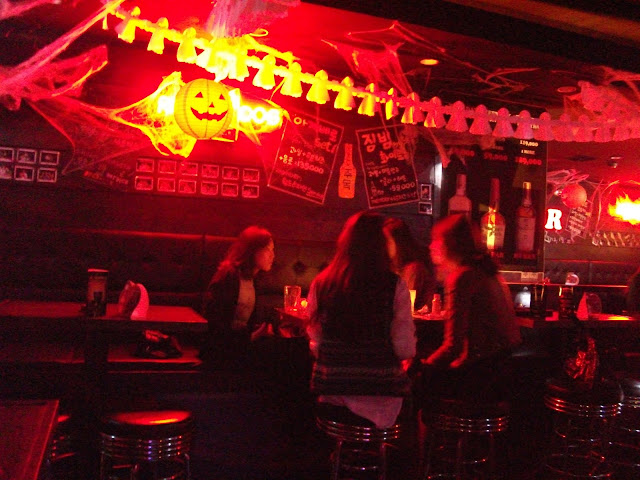 Loving the Halloween decor at Ho Bar in Hongdae. 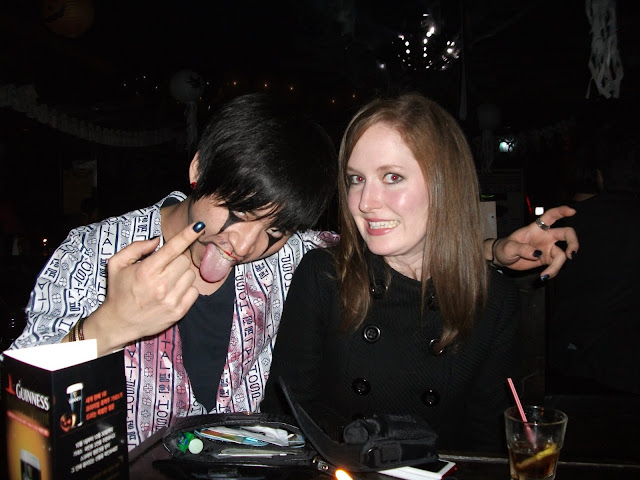 Bartenders dressed up as insane asylum patients and really got into character. So much so that one of the girls was crawling backward down the staircase as we left. Exorcist, much?

After waking up, I dressed up in my costume, which was mandated by my school for the special Halloween program we were hosting. I dressed as Guem Jan Di, the lead character of my favorite Korean drama, which I have blogged about before. I have to admit proudly that my costume was pretty dead on. Perhaps my physical features won’t let me pass as Korean, but the kids still loved it and to this day call me “Guem Jan Di teacher.” I spent the day carving jack-o-lanterns and passing out candy to trick-or-treating students. We even had a haunted house and held “Dracula’s Festival” complete with Halloween themed games. 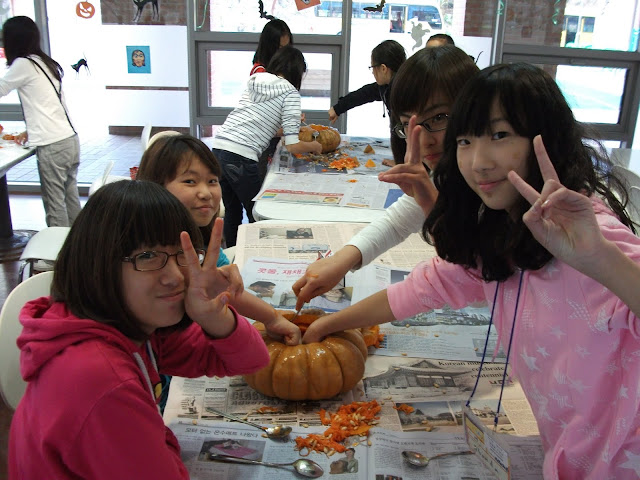 Students learn how to carve jack-o-lanterns in pumpkin carving class. 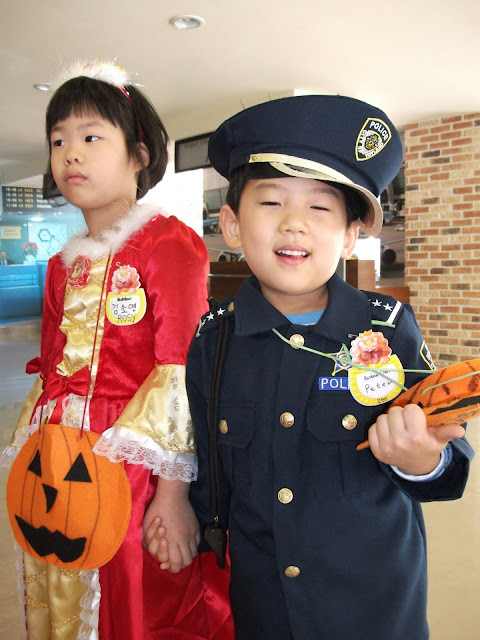 Kindies in costumes is by far the cutest thing ever. My favorite was this little police officer. 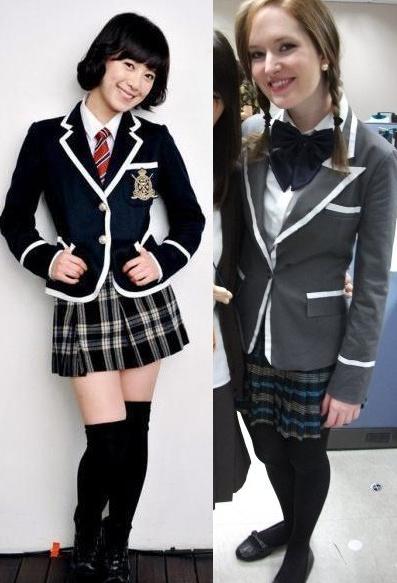 I had to make a few small changes, but I loved being Geum Jan Di for a day.
Though Halloween is mostly celebrated in America, I predict that it will be widely celebrated in Korea in a few years. “Halloween Day” is a new word in the Korean language (though it’s English), costume rental stores are growing in number, and most English schools hold events similar to the one held at my English village. It’s just a matter of time before this holiday contributes to the continuing westernization of Korea.

Still, Korea has its own commercial holidays. Shortly after Halloween, displays were set up at grocery stores and bakeries while posters were plastered on the windows of 7 Elevens and Buy the Ways, all of which promoting Pepero Day.

A pepero is a wafer-like cookie stick dipped halfway in chocolate manufactured by Lotte, an extremely large company in Korea. Legend has it that this holiday began in 1994 when some schoolgirls noticed that when placed together, four Pepero sticks resembled four 1s, thus 11-11 (November 11th). They then traded Pepero sticks on this day in hopes they would grow as tall and as slender as a Pepero. In my book, chocolate is known to have the opposite effect, but I guess I see the point. Still, it’s more widely accepted that Lotte contrived this holiday as a means for making money, what else?

Despite how it started, it has become a very popular holiday amongst couples, much the same as Valentine’s Day is in the United States. As if the couples’ outfits, couples’ discounts, and the other existing couples’ holidays weren’t enough! Other brands and companies have begun to manufacture variations of the snack and it can now be found in a multitude of flavors and sizes. I noticed that many stores offered Pepero gift baskets containing teddy bears in addition to the snack. One can even buy a kit to make his or her own treats to distribute amongst friends, family, and lovers. Despite its commercialism, raking in millions of dollars, mind you, it is a fun and tasty holiday. 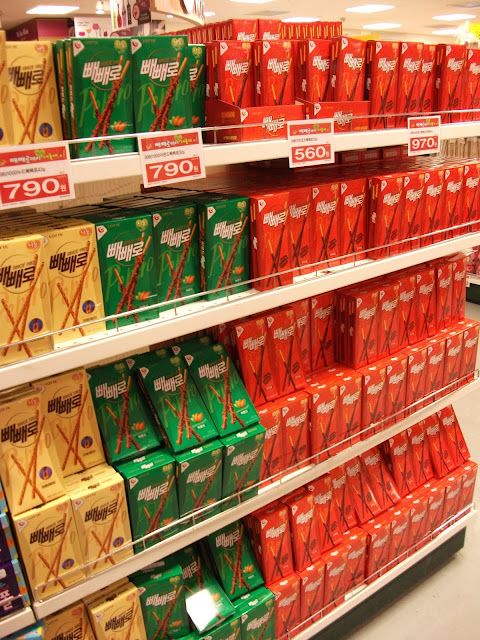 An aisle of Pepero: nude, chocolate, and chocolate almond. Pepero is a cheap treat, costing about 50-75 cents per box. 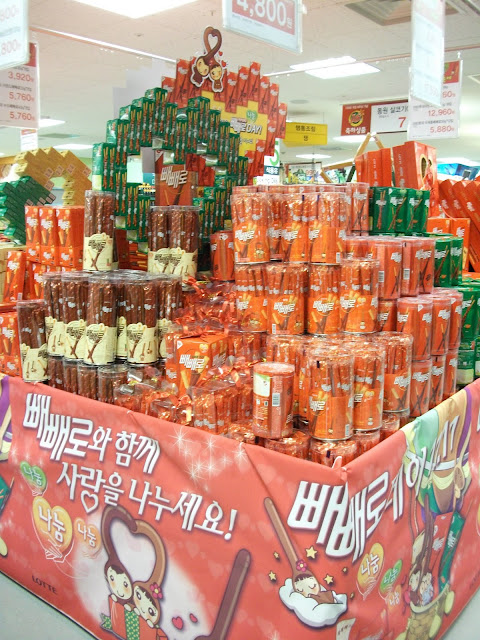 A Pepero display at E-mart promoting Pepero Day on November 11th.
Speaking of tasty, Thanksgiving is coming up soon and while I will miss my aunt’s delicious sweet potatoes and mom’s cornbread dressing, I have been told that many restaurants around the city do a good Thanksgiving dinner. It’s amazing to be across the world and still able to celebrate my country’s traditions, all the while practicing some new ones. We may have our differences, but celebrating, for whatever reason, isn’t one of them. Apparently decorating for Christmas ridiculously early isn’t, either.
1
Previous Post
Next Post