May is one of the best times to visit Korea. The weather is delightful, the countryside is green, and the people seem to be happier this time of year. There’s always something going on and the festivals around the country are seemingly innumerable. With Children’s Day and Buddah’s Birthday being national holidays, I decided to take advantage of my time off to do a little sightseeing of my own and head to Gyeongju: the ancient capital of Korea.

Gyeongju is located on the southeastern coast of the country and is easily accessible by train, car, or bus. It is also a city serviced by the free shuttle promotion for foreigners sponsored by Visit Korea Year. I can’t pass up free stuff, especially when it involves travel, so I applied for a ticket a few weeks previous to my trip and was fortunate to be chosen at random for a spot on the luxury bus. The four and a half hour ride didn’t seem long at all, what with the super comfy reclining seats and the lush scenery of the mountains dotted with the pink of the azaleas that outlined our route.

One of the great things about Gyeongju, in particular the downtown vicinity, is that it is relatively small in area and is fairly walkable. It didn’t take long to find Nahbi Guesthouse, the hostel where I’d be staying for the weekend. TJ, the owner, and Peter, his assistant, were hospitable from the start and after setting my things down in one of the dorms, they pointed out all of the sightseeing spots they recommended on a map of the city. Not wanting to waste time, I rented a bike from the guesthouse and set out to see the highlights of the central downtown area.

Some of the first things a visitor notices in Gyeongju are the immense tumuli, hill-like structures that are speckled throughout the area. Similar to the pyramids of Egypt, these mounds of earth are actually burial tombs of the ancient kings of the Shilla dynasty, arguably the most influential of the three kingdoms of ancient Korea. While they are quite numerous, they are most concentrated at Tumuli Park. This park houses 23 tombs in addition to some beautiful ponds and wooded areas. There is even one tomb which has been renovated so that visitors can see what the tomb would have looked like on the inside: a wooden coffin which held the king’s body, in addition to valuable objects, sat at the bottom of the tomb which was then covered by layers of large rocks in a dome-like fashion. The structure was topped with a thick layer of clay, which was then covered with dirt and grass. Inside the model tomb, there are also artifacts such as pottery and jewelry that were commonly placed in the tomb alongside the king or member of the royal family. 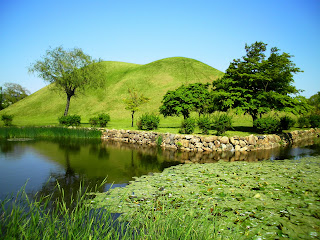 Tumuli Park is beautiful as it is historical.
After taking a look around the tombs, I hopped back on my bike and headed in the direction of the Cheomseongdae Observatory. Built in the 7th century, it’s apparently the oldest surviving star-gazing mechanism in Asia. Honestly, I doubt that people were able to view the stars very well from the thing, as it wasn’t very high. Not so much impressed, I cycled down through the Wolseong Park and watched hundreds upon hundreds of families flying kites. It happened to be Children’s Day so I imagine every parent in Gyeongju had the idea to take their kids to this park. There were also plenty of young lovebirds wandering the grounds, decked out from head to toe in some very creative couples’ outfits, a true sign that spring has arrived in Korea. Despite the crowds, it was still really beautiful and it was nice to see so many people enjoying themselves. I made a few laps in the Gyerim Forest, the supposed location in which the first Kim of Korea was found as an infant in a golden box alongside a rooster. I finally stopped for a rest at the Rape Flower Field and bought an ice cream from a kind gent selling out of an icebox attached to his bicycle. As people passed me, they waved and smiled and timidly said hello. I was loving this place already. 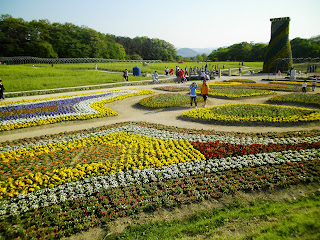 Spring flowers outline walking paths in Wolseong Park in the center of Gyeongju.
Anapji Pond was my final destination for the day. Having once been a playground of the royalty, it still retains its stately charm. With traditional Korean architecture settled alongside the pond, it’s without a doubt one of the most striking landmarks in central Gyeongju. I tried to wait for the sun to set, as it is said that its beauty is intensified amongst the flood lights in the evening, but a chill was building in the air and I didn’t want to be stuck in the cold. So, I biked back to Nahbi just in time to join the other guests for the nightly rooftop party. 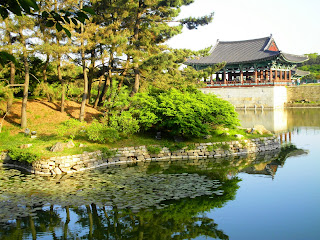 Anapji Pond was once a playground of Shilla royalty. Nowadays, it’s a picturesque tourist spot popular with both Korean and foreign visitors alike.

There was a great group of people staying at the hostel and each hailed from a different corner of the globe. I was pleasantly surprised to meet a family from just a few hours from my own hometown and was caught up chatting about Southern food and culture for a good while. As we all threw back a few brews, we shared travel experiences and some good laughs while the staff cooked us a midnight snack of spaghetti. I slept well in the comfortable dormitory before heading off early the next morning.

After befriending a few fellow Americans the night before, we decided to head out together to visit Bulguksa Temple and Seokguram Grotto, the cultural jewels of Gyeongju. We caught a bus to Bulguksa only to be herded onto the temple grounds with hundreds of other tourists. It was a free-for-all but fortunately we were able to eventually get away from the crowds as people dispersed throughout the complex. We passed pagodas, wandered through bamboo groves, and added prayer rocks to an impressive stony garden near one of the temples. Bulguksa was all very beautiful and the architecture, said to be the best existing example of Shilla architecture, was a visual treat. Still, we were anxious to get up to Seokguram. Opting out of the hour long hike, we hailed a cab up the mountain and soon found ourselves following a woody walkway. Just as we were enjoying the peaceful stroll amidst the hanging lanterns displayed for Buddha’s Birthday, we ended up at the tail of the line of hundreds to see the grotto. 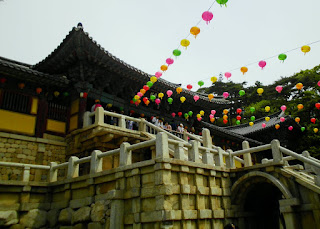 Camera-toting tourists scrambled throughout the temple grounds during our visit to Bulguksa; nevertheless, the temple exuded spirituality. 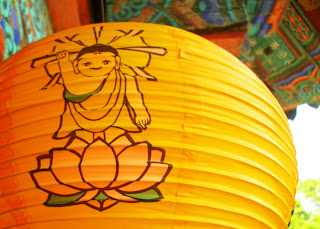 Lanterns decorated Bulguksa and Seokguram in preparation for Buddah’s Birthday.
The weather was nice, and the scenery from the mountain top was stunning, so there was no reason for complaining about the line. We reached the grotto soon enough but were a bit upset to learn that we would not be able to take pictures once inside. We would only have a few moments to view the grotto, then we would be moved along. For the short time we were there, however, we marveled at the architectural splendor of the construction of the site. A large Sakyamuni Buddha sits peacefully amongst lesser deities in a geometrically flawless domed cave carved into granite at the mountainside. Having been built in the 8th century, it was no doubt an engineering feat, considering poor access to the site and limited tools. To this day, Seokguram is regarded as one of the most impressive examples of Buddhist art in the world. Harmonious as it is aesthetic, just a look at the peaceful, smiling Buddha is enough to soothe the most discomforted traveler.

After we got back into town, we enjoyed a hearty lunch of ssambap, a famous Gyeongju dish. Or should I say dishes. Like 30 of them. Ranging from marinated mushrooms to beanpaste stew to fermented stingray (yuk!) we were able to try many different vegetables and meats that we rolled up in lettuce leaves with various sauces. It was, with a few exceptions, delicious and after having our desert of Gyeongju bbang (sweet bread stuffed with red bean), we headed back to the hostel lethargically for a nap. After a final rooftop party, I packed my bags and prepared for checkout in the morning. 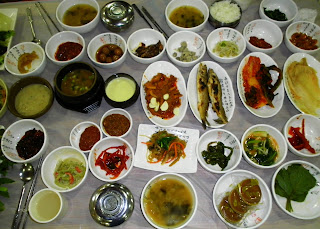 We were able to get a little taste of everything at a ssambap restaurant. A typical spread includes meat, vegetables, soup, and sauces.

Before leaving, I visited the Gyeongju National Museum to learn more about Korea’s history. There were halls of artifacts, like those found at the excavation of Anapji Pond, and all of the exhibits offered a lot of interesting information about various aspects of Korean life throughout the years; it was the perfect way to end my adventure into the ancient capital. I wasn’t quite ready to head back into the modernity and fast-pace of Seoul; my little getaway to Gyeongju had provided an interesting glimpse into what Korea was like thousands of years ago and had enthralled me with its old-world allure. But, the bus wasn’t stopping, so as I dozed off as the sun set, back to the future I went.