Meet the Lees: An Awkward Moment While Dating a Korean

By Mimsie Ladner on Thursday, December 8, 2011
Disclaimer: Before I write this, I should note that I rarely write about my personal life but I thought this was a story worth mentioning. Some parts of it are quite comical, as many meet-the-parents stories are, but please know that I am in no way offending or belittling the mentioned aspects of Korean culture. I’m only highlighting the awkwardness that can sometimes arise when East Meets West in terms of relationships. I also feel that this story might help other foreigners in similar situations prepare for what they might encounter.

With just a month left in Korea, my boyfriend, Yongguen, turned to me and in a no-nonsense tone announced that he wanted me to meet his parents. I froze. We had only been dating about 5 months or so and this was the last thing I was expecting to hear him say.

In Korea, the institution of dating is far more black-and-white than it is in the West. There’s none of this “It’s complicated…” “We’re talking…” “We’re texting”… “We’ve been dating for a year but we still haven’t had the DTR (defining the relationship) talk…” No. None of that. After two or three dates with someone, it’s automatically assumed that an exclusive relationship has been formed. Also, the amount of time a couple in Korea dates can be measured in something similar to dog years. What Westerners might consider a short time- 100 days, for example- Koreans consider monumental. Knowing this, I made sure to explain to my boyfriend early on (the first date) that we do things a little differently in the West. Knowing that I’d be leaving Korea, I also told him that I didn’t want anything serious. 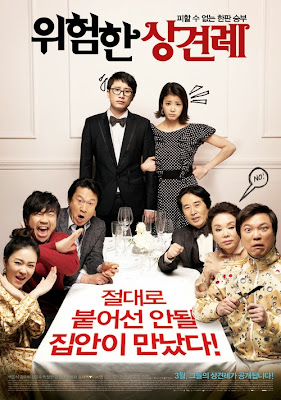 Well, one thing lead to the next and before I knew it, I was going on trips with him to cliche couple spots around Seoul, like Namsan Tower and Nami Island. What can I say? I liked the guy. So, when he asked if I would meet his parents, I got a bit worried. Like in the West, meeting the parents of a significant other often means that things are quite serious and is commonly indicative of a forthcoming marriage. Yongguen assured me that this was not the case and simply wanted his parents to meet me before I left, as he didn’t know when there would be another chance for this to happen.

Eventually, I agreed, but I was not looking forward to it. Even in the 21st century, many Korean parents are not open to the idea of their children dating foreigners. The Korean race is a pure one and older generations often believe that Westerns are culturally inferior. Over the next couple weeks, I worried that I didn’t have a chance to begin with. Knowing that they were devout Catholics, I knew I had at least had the same-religious background thing going for me. I started to assure myself that it would be fine but I soon found out that I’d be meeting them at my boyfriend’s dad’s 60th birthday party (a big deal in Korean culture), which didn’t help settle my nerves. Still, I had agreed I’d meet them so there was no turning back now.

I enlisted the help of my Korean girlfriends. Each had something different to say, some of their advice contradictory. “Wear a cute dress and heels.” “Wear something casual so you’re not trying too hard.” “Bring them a gift.” “Don’t bring them a gift.” “Don’t talk unless they ask you questions.” Well, I knew I could follow through with that last bit of advice, seeing as my Korean skills aren’t the best.

When the day finally came, I spent the entire afternoon getting ready. I settled on a nice dress- nothing fancy- and heels, channeling my inner Koreaness. I headed to Mokdong to get to the restaurant where my boyfriend and his brother were waiting.

I didn’t mind meeting the brother. He didn’t speak much English but he was laid back enough. I attempted to talk to him about things I knew he was interested in, mostly American TV shows. Soon, the parents arrived. As they took their seats, I stood up to bow appropriately and wish the dad a happy birthday, a Korean phrase I had practiced 100 times that day. They were friendly enough and commented on how nice I looked. I could tell they were a bit uncomfortable and uncertain about what to do. As they chatted in Korean, I noticed at the table next to us a Korean family and Western girl about my age. I could see that the same exact thing was going on at their table, which is weird as it’s very uncommon in Seoul. Yongguen’s parents soon saw the same thing and got a kick out of it.

We started enjoying our meal and things were going very smoothly. There was some small talk carried out. About half an hour passed before the awkward interview began.

Yongguen turned to me and had a worried expression on his face. “I’m not asking any of these questions. I’m only translating. And I’m sorry,” he noted before relaying what his parents asked. “So, if you two get married,” his dad started, “will you clean our ancestral graves?” WTF. Okay. I had not prepared for this. Fortunately I had read some books so I was partly aware of why Koreans worship their ancestors and are consistent in beolcho (tidying up their grave sites). Without a beat, the sorority president in me came out with the perfect interview answer, “I believe that if someone marries another from a different culture, she should respect that culture’s traditions.” I also casually mentioned that I didn’t want to get married anytime soon. They were quite content with this answer and continued eating. 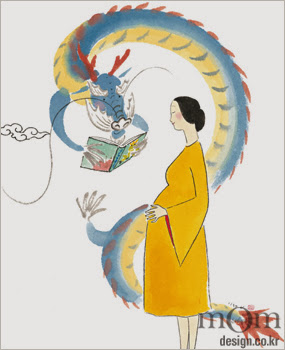 I thought I was in the clear when just a few minutes later his mom chimed in, “Do you have the concept of taemong in America?” “Ummm… what’s taemong?” I asked Yongguen. He explained to me that in Korea, when women are pregnant, either they or close female relatives or friends may have dreams that predict the birth of their child. Certain objects dreamed about indicate certain aspects of the baby-to-be. For example, if an aunt dreams about fruit, then the baby will be a girl. I soon remembered a conversation my boyfriend and I had and that his mom dreamed of a dragon when she was pregnant with him, hince the “Yong” in his name, meaning dragon. I started to think of some of the old wives tales that we have in America but no one really believes in that stuff these days. Koreans, however, strongly believe in taemong.

Jesus, Mary, and Joseph.  What was I gonna say to appease her? I had to be straightforward on this one and simply answered, “No, we don’t have anything like that in America.” She didn’t look very happy. Yongguen took a shot of soju. I looked across the table at his brother who, with a grin across his face, was enjoying the awkwardness of this situation.

Finally, the dinner finished. We said goodbye to his parents and Yongguen, his brother, and I met up with their cousin for a few rounds of drinks. I felt fine but my boyfriend was more nervous than I’d ever seen him, quickly became intoxicated, and was put to sleep early.

I talked to him the next evening, after he had spent the afternoon with his family. He told me that I had received the seal of approval from his parents. They loved me. OK. All that worrying for nothing.

He then told me his dad wanted to take me out to Chuncheon for some dalk galbi, my favorite Korean food. I felt my stomach drop. Not again.

Overall, everything went well. I never felt judged by my boyfriend’s family and although the questions were far more serious than anything we would discuss in a similar meet-the-parents situation in the West, I’m convinced that they were more curious than anything. Not having traveled outside Korea, his parents wanted to know more about my culture, which is understandable. While there will still be some parents and older generations who do not want to see their children marry out of the Korean race (even if they live in Western countries) things are progressing. People are becoming more open minded and understanding of the changing times.

Time will only tell where our relationship will go. I’m planning to be back in Korea in April and I’m expecting my mom to visit in May. If Yongguen and I are still together, it’s payback time. I’m sure that evening will make for another great story. Muah hahaha.

(Update July 2012:  Yongguen and I have since broke up.  Unfortunately, the cultural differences between us were far too great to continue our relationship.)