By Mimsie Ladner on Sunday, September 9, 2012
Sometimes, you just need Mom’s cooking. When living abroad, however, such a thing is usually unobtainable. Enter Suji’s, one of Seoul’s most talked about dining establishments, that serves up ‘the next best thing to Mom’s home cooking.’

Suji’s was founded in 2005 by Suji Park and was originally intended to be an eatery for expats wanting a taste of home. Inspired by the corner delis of New York City, Suji’s was (and continues to be) a respite from bibimbap and kimchi. With an extensive menu of delectable deli meats and a number of American brunch items, it didn’t take long for Suji’s to expand, opening a number of other branches, including two in Tokyo, Japan. But that was only the beginning.

Since then, Suji’s has developed into an international brand, mass producing their quality deli meats from factories just outside Seoul and supplying Costco Korea with chicken for their famous chicken bakes, salads, and pot pies. As the brand continues to grow, cold-cut-craving expats like myself will be able to purchase premium meats like pastrami and corned beef without having to commute across the city to do so. 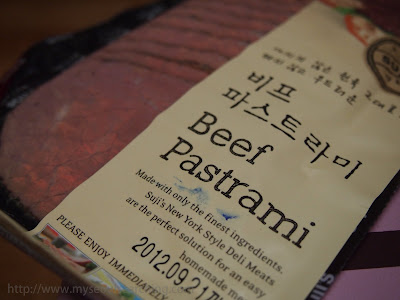 Suji’s now sells their premium deli meats at all Costco locations throughout Korea.

Earlier this week, I visited the original Suji’s to see what all the hype was about and to sample some of the dishes for myself. It was pouring outside and I had taken a taxi with my friend Jay to Itaewon to avoid the bus/subway congestion, but found myself even more impatient with the bumper-to-bumper traffic along the way. Upon entering Suji’s, my frustrations immediately slipped away, eased by the intimate atmosphere of the main dining room. Sophisticated chandeliers provided perfect lighting and the black and white photos of Manhattan on the wall transported me to another place all together. 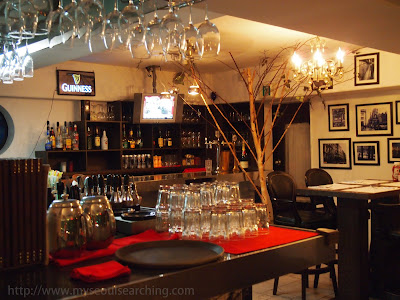 Black and white photos of Manhattan and a classy bar transports diners all the way to New York. 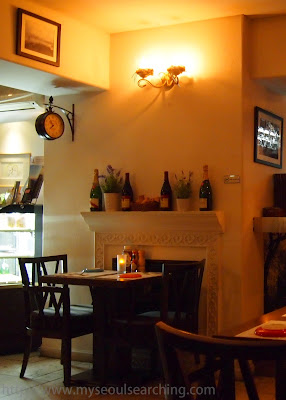 A clean design and romantic candlelight create a modern and intimate atmosphere.

We started our meal with the New York Hot Pastrami Sandwich (15,000 won). Thick slices of Suji’s homemade pastrami were piled high on rye bread and served with cole slaw and potato salad. I was sold at the first bite. The meat was tender and perfectly seasoned while the bread was fresh and buttery. A hint of mustard added just the right amount of flavor to an already delicious concoction. Simple and unpretentious, the sandwich proved itself to be the star of the meal and an ideal candidate for the city’s best comfort food. Jay, who is a New Yorker himself, noted that the pastrami was “as close to New York as you’re gonna get in Seoul.” 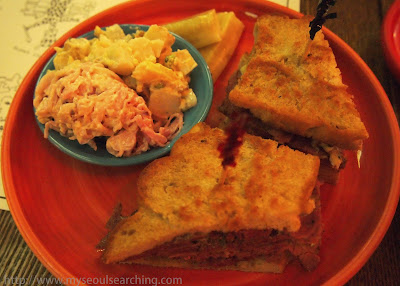 The New York Hot Pastrami sandwich is a must-try when dining at Suji’s.

The Fish and Chips (16,000 won) arrived next. The beer battered tilapia was crispy and light, not at all greasy, and tasted great dunked in the tarter sauce and malt vinegar. The thick cut fries and slaw were also good. The dish didn’t stand out as anything spectacular, but is the perfect meal option for those wanting to throw back a few brews on Suji’s rooftop terrace. 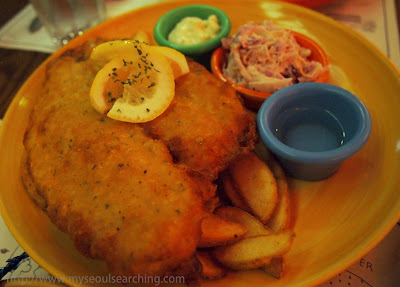 The flavorful Fish and Chips is a great meal to be enjoyed with a few beers.

One of the best things about Suji’s is that they serve brunch all day, which is great for those of us who sleep in late or work in the mornings. They’ve covered all of the main players- omelets, pancakes, and eggs benedict to name a few. We couldn’t leave without sampling one of Suji’s most popular brunch items, the New York Brunch (14,000 won): generous portions of smoked salmon, cream cheese, capers, and green onions on a toasted bagel with a side of fresh and chunky hashbrowns. I had already been feeling quite full at this point, but couldn’t stop myself from finishing this one off. The bagel could have been toasted a bit longer, but the salmon practically melted in my mouth, bringing me to a new level of breakfast-for-dinner bliss. 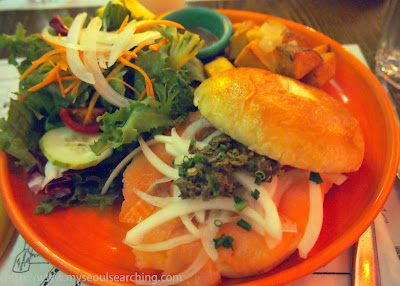 We were so pleased with our meals that we took home some of the pre-packaged pastrami that is sold at the restaurant (in addition to all Costco locations throughout Seoul.) We later found that although it wasn’t as good as the cuts made in-house, it was fantastic fried up with eggs or plain with a glass of wine. 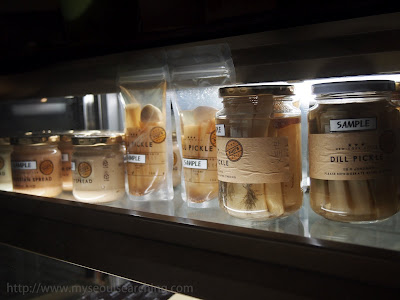 All of Suji’s deli meats, sauces, and pickles are made in-house and can be purchased to take home.

Suji’s was successful in pioneering the brunch craze that is still spreading throughout Korea’s capital. I’m confident that they can do the same with deli meats and I look forward to the growth of Suji’s as a global brand. While I wait, you can bet that I’ll be back to Suji’s whenever the craving for Mom’s cooking kicks in.

**Please not that this post was sponsored by Suji’s but the opinions are, of course, my own.