All Aboard the Korean Wine Train

Recently, I signed on to film an episode of “Top 10 Korea” with Arirang TV.  I’ve spent the past few weekends traveling to destinations around Korea that have some sort of relation to railroads, the theme of the episode.  I’m positively certain that I will end up looking like an idiot on international television, but despite that, it has been a really fun experience so far.

The first segment of “Railroads” that we filmed was on the Wine Train.  I had read about this attraction before and was immediately intrigued by the idea of taking a train ride through the Korean countryside while enjoying unlimited wine.  I had been meaning to do this over the past year but the opportunity never presented itself; so, I was ecstatic when I found out that I’d be doing it on someone else’s bill.  I was a bit apprehensive, however, to consume copious amounts of wine in front of cameras.  The night before I departed, Travel Channel host Samantha Brown (aka my role model in life) responded to a Tweet advising me to “take small sips.”  I guess she doesn’t know how they do it in Korea.

I met my friend and “co-star”, Marie, and the crew from Arirang TV at Seoul Station early on a Saturday morning a few weeks ago.  After filming a super cheesy and poorly executed intro (six years of drama club never amounted to anything), we received our passes and headed toward the designated platform to board the train.

We entered the “Red Wine” car, the nicest of the four cars, to be seated on plush, velvet-covered sofas.  Gold drapes lined the windows and images of grapes and wine glasses covered the entirety of the car.  The decor was more tacky than luxurious, but the environment was fitting for the experience.  I later saw on a trip to the bathroom that the other cars were a bit dumpy, but passengers seemed to be content.  Then again, I guess wine does have that effect. 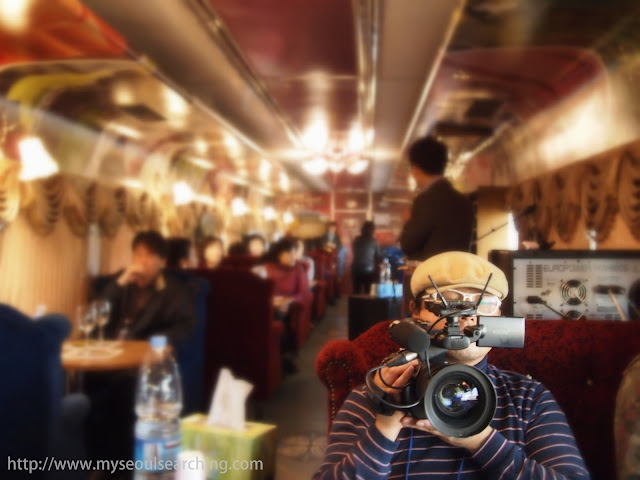 The MC introduced the concept of the train and the itinerary of our day.  There was some brief instruction on wine etiquette but it was in Korean, so I missed most of it.  Once the train reached Suwon, the wine tasting began.  There were four types of wine offered on the train: white, red, sweet red, and bokbunja (복분자), made from a berry similar to a raspberry.  They were served at a Korean pace (read: FAST) so we were basically forced to chug each serving so as to not miss the next.  Korea isn’t necessarily known for its wine (yet) and I realized why after the tasting.  The majority of them were less than impressive, but the red was decent so I stuck with that one for the remainder of the trip.

As we took in the views, we were entertained by the MC who played a selection of trot hits that seemed to be greatly appreciated by the older folks on board who sung along.  We also played some fun games, including a few intense rounds of rock-paper-scissors that involved passengers putting stickers on each others’ faces.  This was a great idea, as evidenced by the good times being had by all. 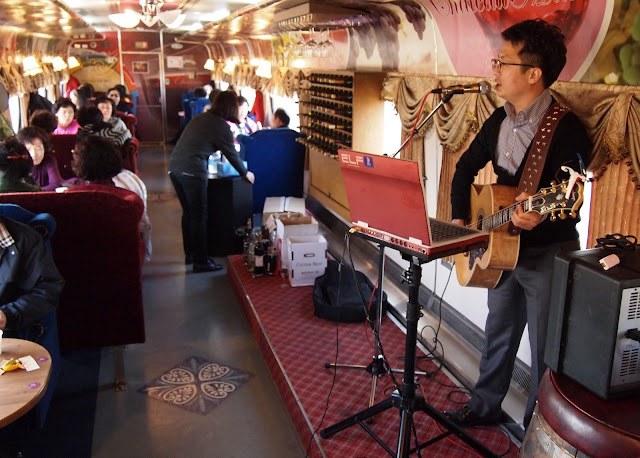 A snack platter was later brought out, which could have easily insulted any French person on the train.  I didn’t see anyone faint, so I guess there were none on board.  Arranged neatly on a silver tray were cheese puffs, Ritz crackers, corn chips, and slices of American cheese wrapped in plastic.  At first, I giggled at the thought of wine and corn chips, but by the time we reached our destination, I noticed our tray was empty.

Quite tipsy, I tried not to stumble out of the train when we reached Yeongdong Station and boarded a bus that took us to Wine Korea, the only winery in Korea that maintains a vineyard and produces its own wine brand. It was also featured in the recently popular drama “A Gentleman’s Dignity” which makes it a great destination for Hallyu fans and wine connoisseurs alike. 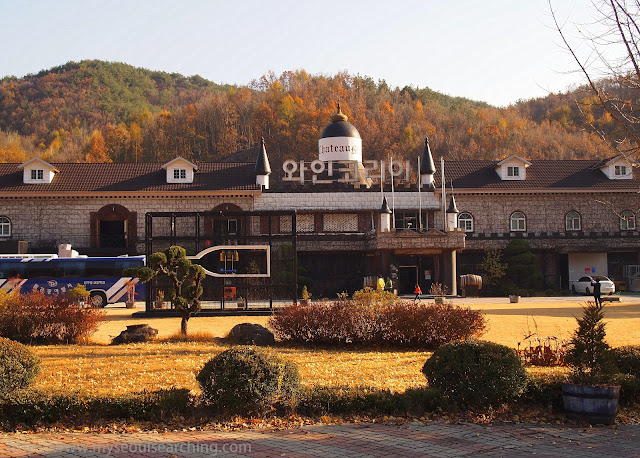 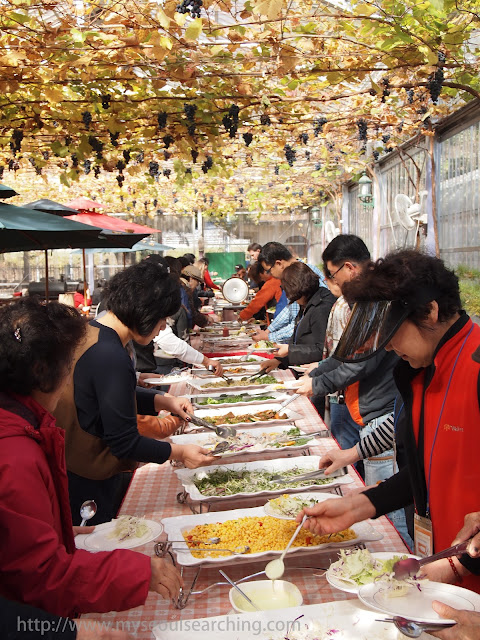 We were treated to a buffet lunch of Western and Korean cuisine on a beautiful enclosed terrace with lots of natural lighting and real grapes that hung on vines overhead.  The food was just okay but there was more unlimited wine to keep everyone satisfied.  Like the Koreans, I was quite red-faced at this point, which I’m sure will be obvious when the episode is aired.  Marie and I took a look around the grounds and noticed the vineyard toward the back of the property.  The harvest was over, but I could see that much care went into maintaining the grapes.  I suppose the geography of the city makes it perfect for harvesting the fruit, as the region is the biggest producer of grapes in the country.

The highlight of our trip was the wine spa foot bath.  After taking off our shoes, we were led to another peaceful area of large hot tubs and individual foot buckets each filled with a boiling mixture of water and red wine.  The scent was intoxicating and the heat did wonders for the muscles in my feet.  The MC led us in some group massages which brought strangers together and families even closer.  Although this behavior would seem strange in the West, it was not at all awkward and the human interaction was actually quite touching. 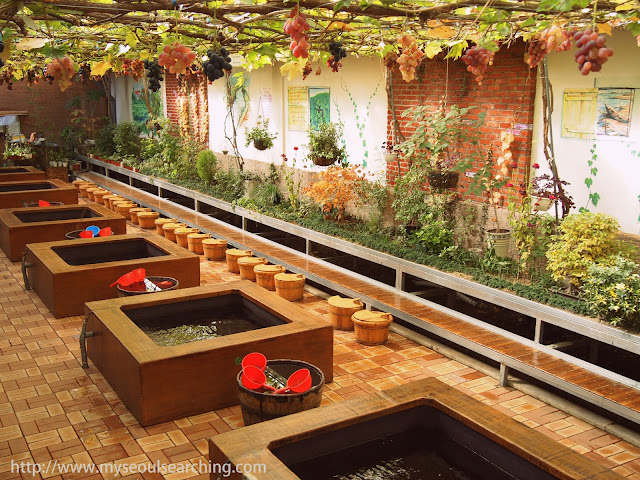 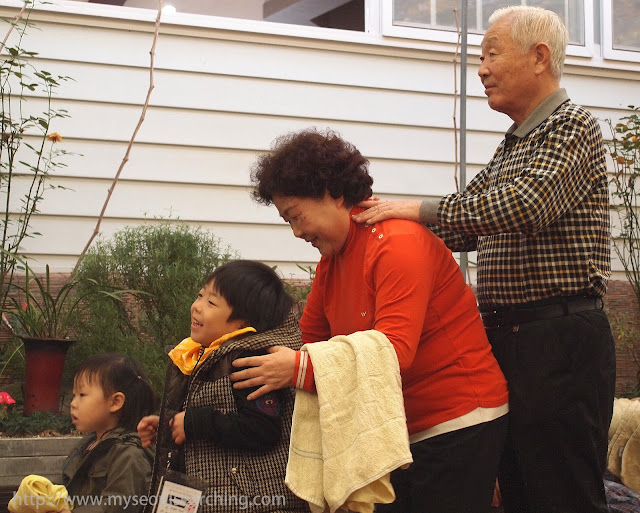 Before leaving, we made sure to explore the wine cave, which was essentially a small room of barrels, and the temperature-controlled cellar, where anyone can store their wine for a hefty yearly fee.  The gift shop was also nice, stocked with the winery’s own products as well as some traditional Korean pottery and teas. 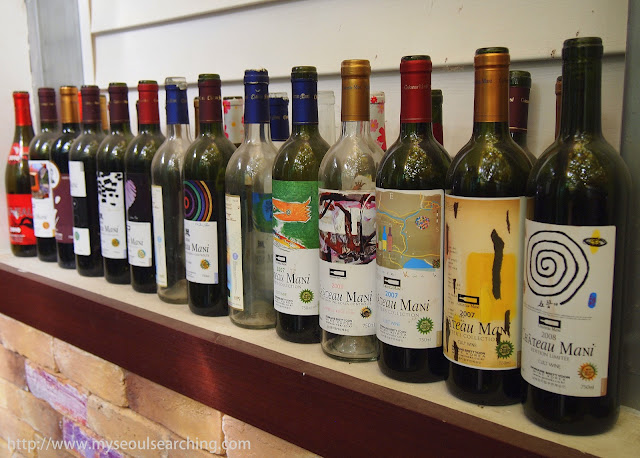 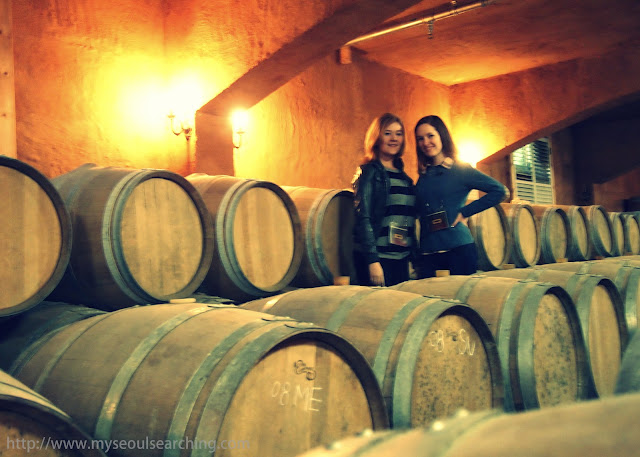 The day ended with a trip back to Seoul on the cinema train.  We were given kimbap, boiled eggs, and another bottle of raspberry wine for the journey back to the capital.  The curtains were pulled, leaving the car pitch black and a projection screen was lowered.  The Thieves, a recent blockbuster, played as I nodded in and out of consciousness as we departed wine country.

It wasn’t exactly what I had expected on a wine trip, but I had to remember that this wasn’t Beaujolais or Napa.  It was Korea, a country where wine culture is still very much in development, and had to be appreciated as such.  The velvet seats, the sub-par wine, the twangy trot, the cheese puffs, and the group massage in red wine foot baths all seemed to work well together. In the end, I was thankful for another unique experience in this dynamic country as well as the opportunity to witness firsthand the beginning of an emergent industry in Korea.

More Info:  The Wine Train runs between Seoul and Yeongdong every Tuesday and Saturday morning unless otherwise stated.  The cost is 93,000 won per person and includes all experiences, food, and transportation mentioned in this post.  For reservations, call 02-3149-3333 or visit their website: http://www.winekr.co.kr  (Korean).