Let’s go to the Movies: Korean Films with English Subtitles

By Mimsie Ladner on Wednesday, November 7, 2012
Thanks to Psy and the constant replay of Gangnam Style (which was recently just declared the second most watched video on YouTube EVER), the world now knows that there’s much more to Korea than kimchi and electronics companies.  Finally, westerners are seeing this other, hipper side of the country that Korea’s neighbors discovered long ago.  Korean pop culture, particularly its music (K-pop), TV shows, and and cinema have become increasingly popular around Asia and in Europe over the past decade or so.  This trend, also known as the Hallyu Wave has become a big export of Korea and is one of the primary reasons tourists flock to Seoul, the Hollywood of Asia, on a regular basis.

Although music may seem to be the bigger component of The Wave, Korean cinema has become increasingly recognized and celebrated around the world.  Just recently, the Korean film Pieta took home the win at the Venice Film Festival.  The Thieves was just proclaimed to be the most popular closing night film ever at the International Hawaii Film Festival.  Even Hollywood is getting in on the Korean film action.  Oldboy, a  controversial revenge film, is currently being remade by Spike Lee and is expected to come out in October of next year.

Although I have always been a fan of foreign films, I didn’t get into Korean films until I moved here.  I’ve seen my fair share of them via MySoju, a web database of Korean movies and TV shows that can be streamed with English subtitles.  I have, for the most part, been impressed with the ones that I’ve seen.  Romances tend to be a bit cheesy (with inevitable endings of cancer or amnesia) but dramas and horror flicks are done quite well.  I’ve also learned a lot about Korean culture in addition to some useful phrases through these movies.  Still, watching the films on a 10 inch netbook with the occasional error or freeze leaves something to be desired.  Fortunately, I, along with other foreigners in Korea, no longer have to rely on the internet to get our Korean film fix. 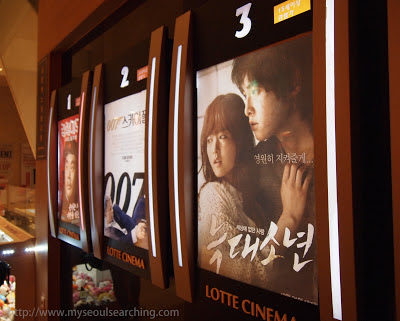 South Korea is one of the few countries in the world to watch more domestic films than imported films.
Last night, I attended a special screening of A Werewolf Boy at the Lotte Cinema in Hongdae.  The Korean Tourism Organization sponsored this event and treated visitors to free admission, popcorn, drinks, and the opportunity to watch Korea’s current number one movie with English subtitles. 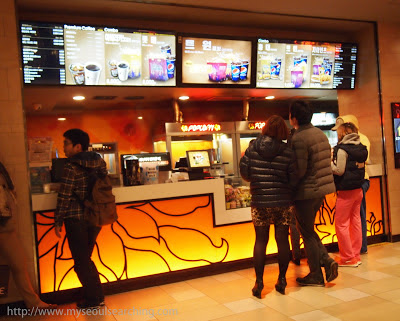 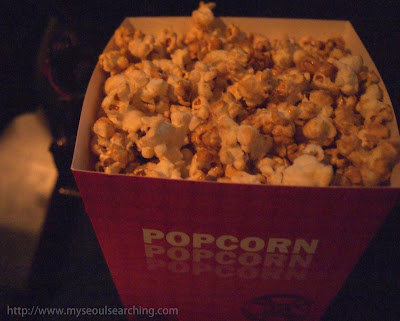 The KTO treated us to yummy caramel popcorn. 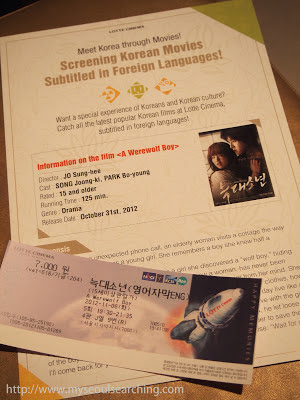 In addition to our ticket, we were also given a synopsis of the film in English.

A Werewolf Boy (늑대소년) is a touching fantasy romance about an elderly woman that returns home to Korea after living in America to sell her childhood house.  Upon her arrival, she is reminded of her youth and of a handsome wolf boy that she met late one night after moving to the countryside.  Believing the feral boy to be an orphan of the war, she tries her hardest to tame him, teaching him how to wait patiently before a meal and how to write and speak.  The two eventually fall in love, but the girl is forced to leave under tragic circumstances, but requests the boy wait for her and promises that she will return.

The film did a nice job of combining elements of humor, drama, and romance, making it the perfect chick flick.  The acting was good (especially Song Joong-ki’s canine characteristics) and the plot was lighthearted but entertaining, keeping the audience captivated throughout the entire125 minutes. Special effects were amateur, but the script was touching, with some lines evoking immediate tears from the majority of the female viewers, including myself. I couldn’t help but think of the Twilight movies while watching, as the plots were similar, but the love story was more genuine and innocent.  In a way, this film predicts what would have happened if Bella hadn’t been bitten.  In contrast, sadly enough, there were no shirtless werewolves in this film, but I suppose that’s to be expected in Korea.

If you are a girl, see A Werewolf Boy.  You won’t be let down.  Or, if you’re tired of the whole supernatural trend that has taken over the world’s TVs and big screens, fear not as Lotte Cinema will be featuring new Korean movies with English subtitles regularly on Tuesdays (around 7PM) and on Saturdays (around 10AM) at the Hongdae branch.  Tickets can be purchased at the movie theater or reserved online through the Lotte Cinema website.  The website is currently only in Korean but an English version is expected to be released in the near future.

As Psy continues to do the horse dance around the world, the Hallyu Wave will follow in his wake.  Sure, it might not be a tsunami.  But, it might be enough to inspire outsiders to check out a Korean flick or two.  Whatever the result, the Korean film industry is sure to continue to expand and inspire. For movie lovers and Koreaphiles like myself, this couldn’t be more exciting. 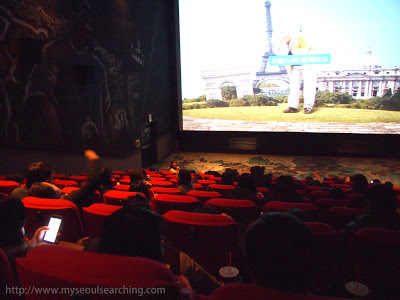 To get to Lotte Cinema, take the Seoul subway to Hongik University Station (Line 2).  Walk straight out of exit 8 for one minute.  Lotte Cinema is on the 8th floor of the Star Picasso building on the right.  Signage is limited, so look for the Uniqglo and Mixxo shops, which are on the first floor.

New to Korean cinema? Need a recommendation?  Check out this blogger’s list of the ten best Korean movies.