By Mimsie Ladner on Friday, January 4, 2013
In the latest segment of “Not-So-Normal Norms”, I talk about letterman jackets, MTs, condiments, the excessive wearing of high heels, and the lack of gray hair in Korea.   As usual, I must note that this post has been written to point out Korean cultural norms that are different from those in my home country, America, and the West in general.  My comments are in no way intended to degrade Korean culture or Korean people.

1.  Letterman Jackets: I remember being in high school some years ago and thinking how cool varsity jackets looked.  I was always secretly jealous of the athletes at my school or the girls who dated athletes who wore them, as I knew there was no chance that I (born with two left feet) would ever own one.  The jackets stood for so much that I admired but was incapable of: strength, speed, and agility.  By the time I reached my senior year, my school had created a new letter: academics.  As much as I had wanted one of those jackets, I thought this to be ridiculous and nerdy.  Who would want to letter in academics anyway?  It’s not like I would have dared to wear that jacket after graduation anyway.

When I arrived in Korea, however, I soon realized that the sole purpose of  letterman jackets has nothing to do with sports and everything to do with academics.  Also, these jackets aren’t worn until one enters university.  In the same way that Americans sport their schools’ mascots on sweatshirts and baseball caps, Koreans show off their specific colleges (liberal arts, music, etc.) on leather jackets along with their alma mater’s name embroidered across the back.  These jackets become a source of pride for one’s school and it’s not hard to spot university students sporting them throughout the city. 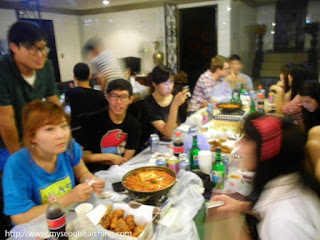 2.  MTs:  Something that American and Korean universities do have in common is the concept of spring break, with some variations.  While Americans usually flock to beaches and strip down to bikinis, Koreans tend to flock to pensions and condominiums in the countryside throughout the year and keep things a bit more low key on trips called MTs (or, Membership Training).  They do, however, play drinking games and consume ridiculous amounts of alcohol to bond (and hook up with) their fellow classmates.  Some companies also go on similar outings, as Koreans feel that binge drinking creates bonds and encourages better relations amongst one another.  Makes sense to me, as long as no one remembers all the embarrassing shenanigans and bouts of vomiting that no doubt take place on these outings.

3.  Costco Condiment Cocktails:  Speaking of vomiting, there’s a rather stomach-turning norm that I thought I might mention.  Although this norm isn’t exactly something I see often, it is one I observe on every grocery shopping trip to Costco.  Usually when I make my monthly trips to pick up bulk packages of Cheerios and cheese, I make sure to stop at the food court for cheap pizza slices and delicious chicken bakes.  After ordering, diners pick up their own cutlery, napkins, and condiments.  Then it gets weird.  I don’t know where Koreans picked this up from, but they make a small mountain of mustard, ketchup, relish, and onions from the self-service bar, mix them together, and eat the concoction as a side dish.  I usually have to revert my eyes from those sitting next to me so as to not loose my appetite or gag impolitely.

4.  Grayless Grandmaw:  When my mom was visiting me here in Korea back in May, she made the comment that there must be a lot of black hair dye sold in Korea.  I took a look around and realized that she must be right, as there was not a gray head in sight, despite the fact that most of the people around us were in their later years of life.  While I don’t have any statistics on this matter, one thing is for sure: older women (and men) go through a lot of hassle to keep their hair black and thick.  In fact, once a woman reaches a certain age, it seems that it is a right of passage to have one’s hair chopped short, permed, and colored on a frequent basis to look exactly like one’s cohorts.

There was an entertaining commercial out a few years ago that poked fun at the identical haircuts of older Korean women.  It shows five women sitting on a subway and the voice of a young boy can be heard asking his mom why they all look the same.  The KT Olleh (phone company) jingle chimed and their dos were “upgraded” a bit.  In a country where elders demand respect for being older, they certainly go through a lot to keep from looking their age. 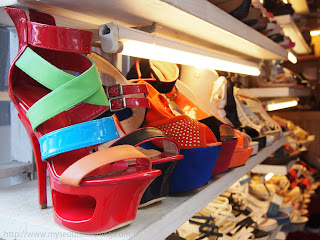 5.  The Hills Have Heels:  Even more important than one’s hairstyle is one’s footwear.  Heels, to be exact.  Perhaps it’s that Korean women come out the womb with feet ready to sport these essential accessories; by the time they reach their twenties, they walk more naturally with them than without them.  Heels are not only sported on dates and shopping trips but also during the least likely of outings.  It’s not uncommon to see women in high heels hiking up mountains or fishing on frozen rivers.  Yes, heels as ice fishing gear.  I’ve seen it all.  Sure, it’s a bit senseless, but their hard work and dedication to their looks have made them some of the most fashionable women in the world.  And for that, I’m envious.  A little.

Be sure to check out parts one, two, three, and four of Not-So-Normal-Norms to learn about even more unusual Korean cultural norms.