By Mimsie Ladner on Thursday, February 26, 2015
One of the biggest food trends to explode in Korea over the past year or two has been chimaek, or chicken and beer. And for obvious reasons. Separately, they’re great, but together… the pair is a match made in culinary heaven.

The latest restaurant to feature the dish is Brew 3.15. Located in an up and coming neighborhood near Insadong-gil, the establishment is the second restaurant endeavor of Daniel Gray, popular food blogger of Seoul Eats fame. I stopped in recently to see Daniel’s take on the Korean classic. 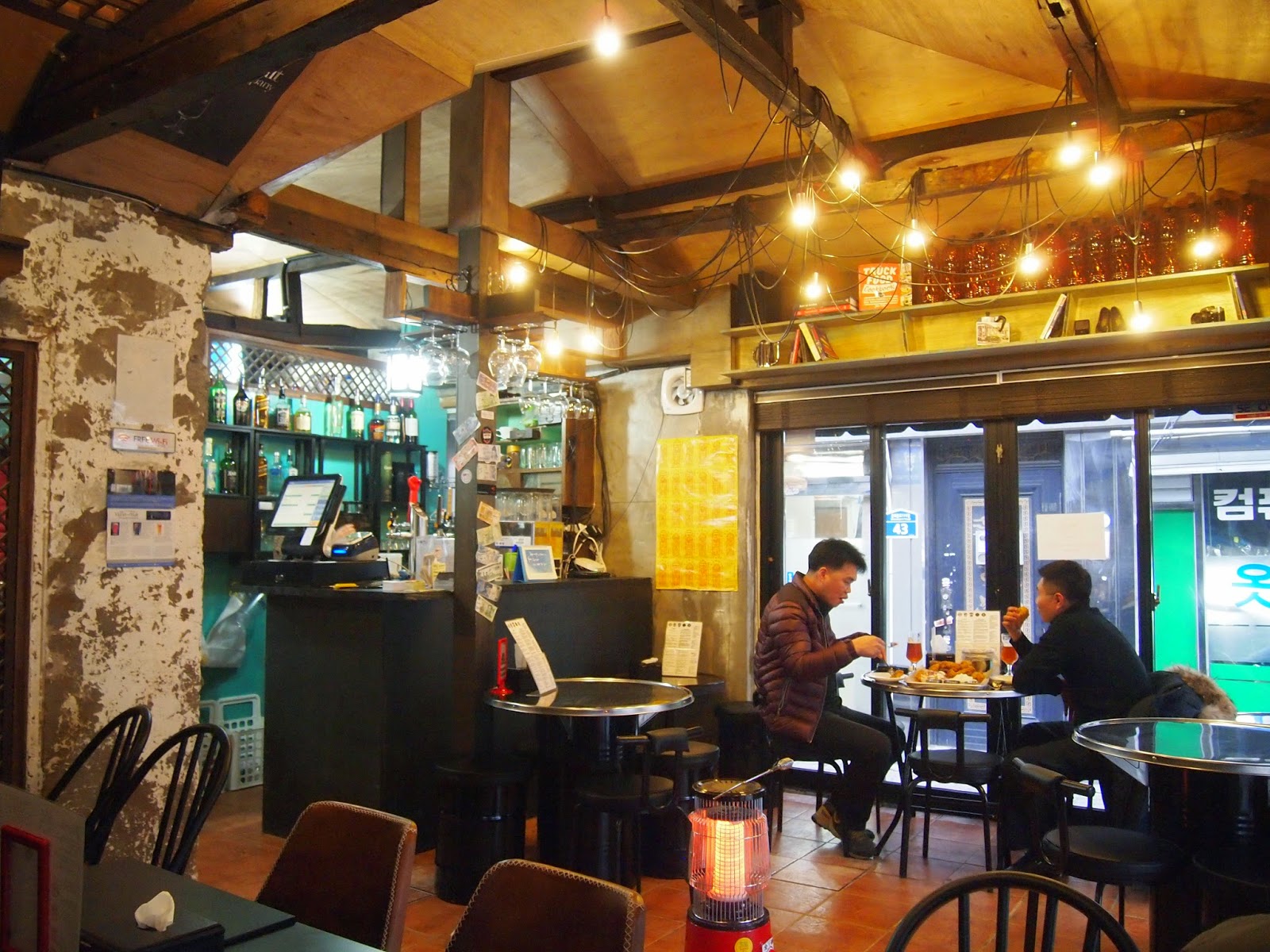 The atmosphere was nice. Situated in a more traditional building, the restaurant is small and cozy, with lots of natural light.

My friend and I started with the Beer Sampler (₩10,000) which included four good-sized beakers of craft beer. The sampler included Ryepa by Galmaegi, along with Mocha Stout, Blanche de Hwado and ESA, all by Hand and Malt. It was a good variety, but the Ryepa, an American-style rye strong ale produced in Busan, stood out among the rest. It was quite heavy, but very hoppy and flavorful. Cocktails and craft beer starts at ₩7,000, though good ole Cass is available at ₩4,000. If you’re with a large group, the pitchers are a good option. 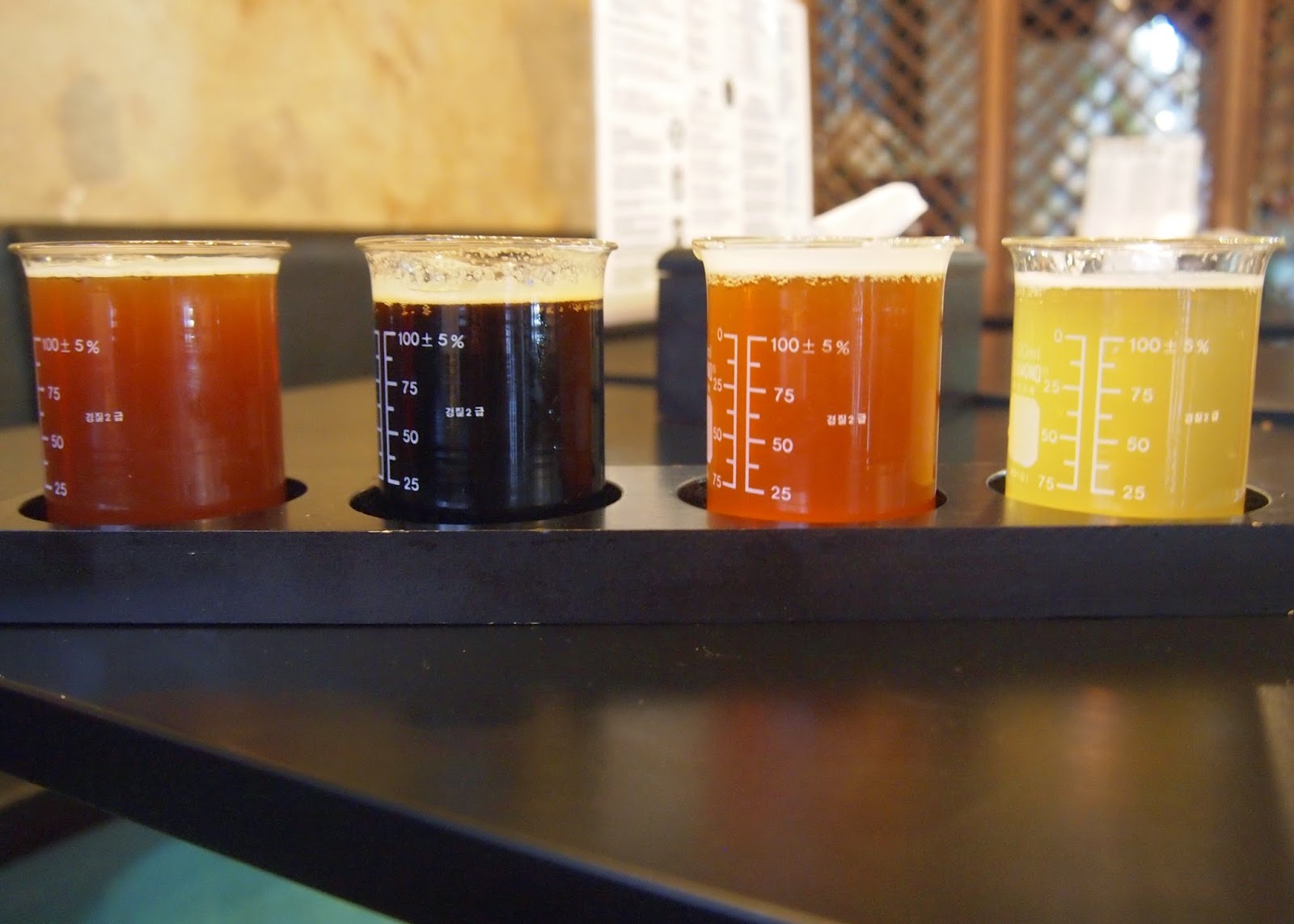 Next up was the Brew 3.15 Fried Chicken (₩18,000). A huge portion (so big, in fact, we had to take half of it home) of the restaurant’s signature dish was brought out with a few homemade sauces and dipping salt. I had expected the chicken to be double fried, as it usually is in Korea, but it reminded me more of the brown bag homemade chicken I grew up with in the American South. The coating was a bit floury, much to my approval, and well-seasoned. The chicken itself was super juicy and tender. 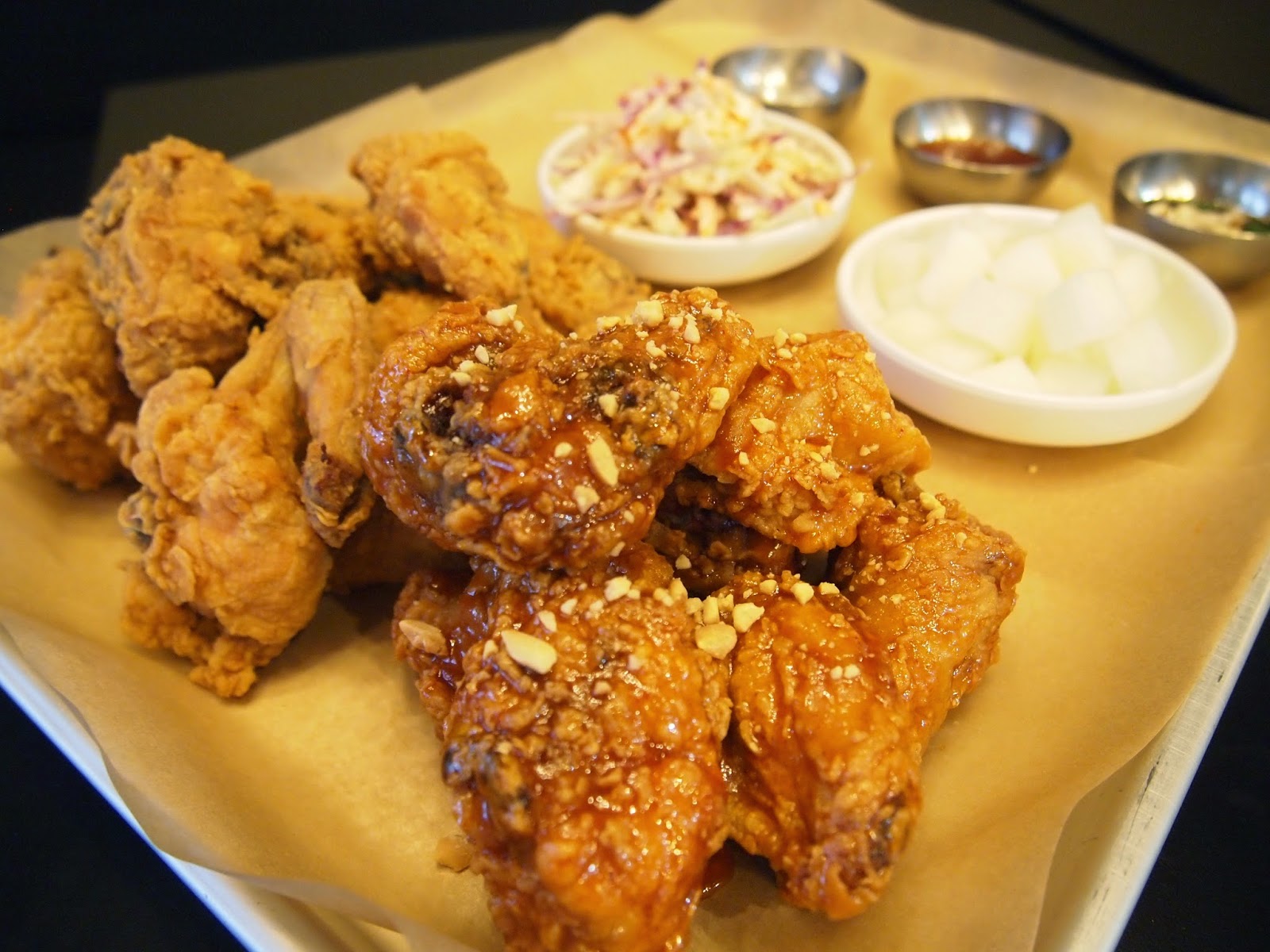 Half of the order had been specially made for us (thanks Dan) and was coated in a yangnyeom sauce and peanuts. Usually, I prefer my yangnyeom to be on the spicier side, but this sweeter one was still good and a nice twist on the original. The chicken balanced well with both the radish and coleslaw that accompanied it, though the coleslaw was more of a fresh salad than the creamy dish I’m used to. 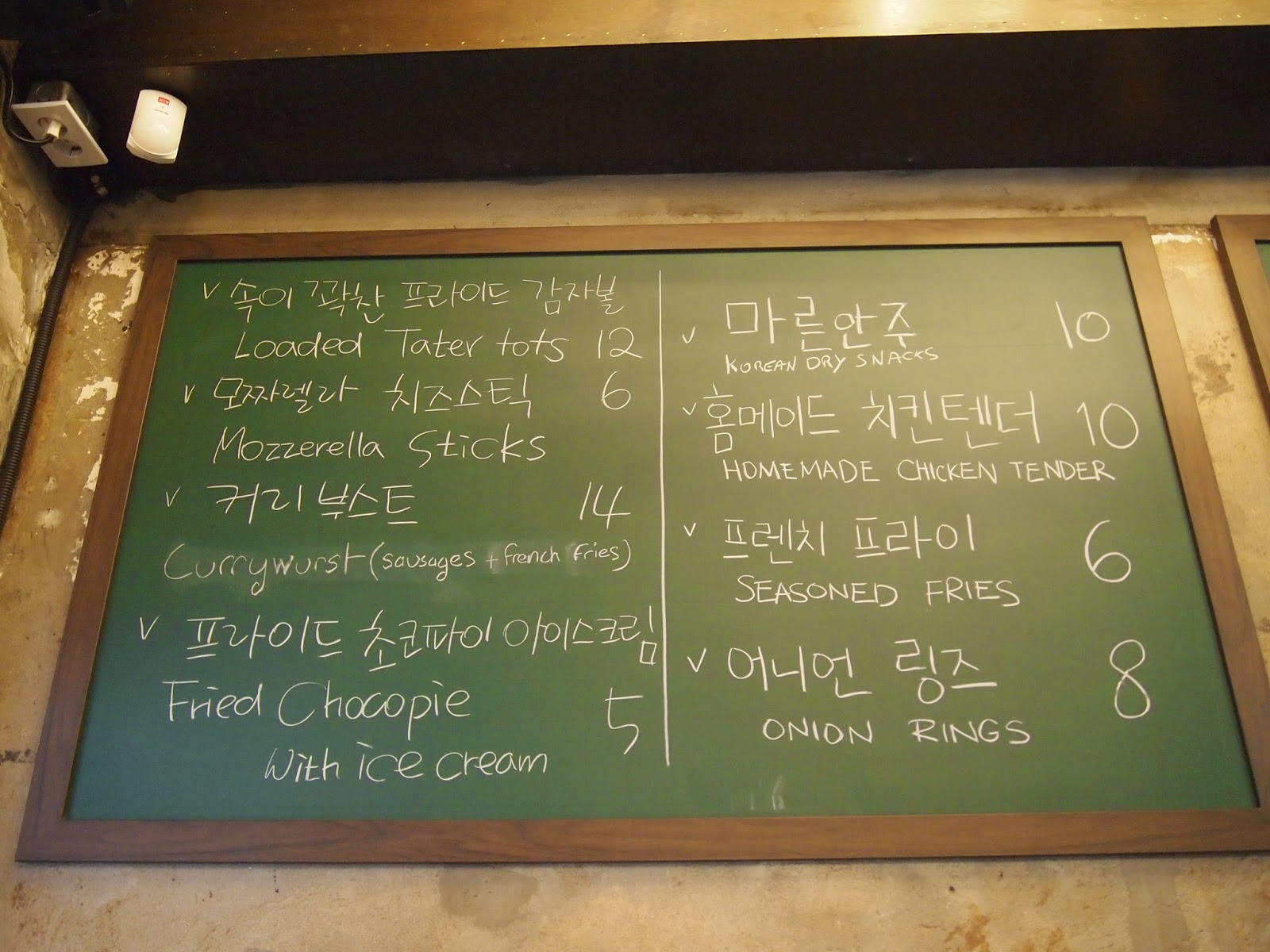 In addition to chicken and beer, Brew 3.15 also serves up traditional bar fare, like fries, onion rings and cheese sticks but we went for the Totchos! (₩12,000). A mound of deep fried potato bites were loaded with meat, gravy, cheese, sour cream and jalapenos in true nacho form. I personally think it’s pretty hard to mess up tater tots, but these were especially delicious and make for a great drinking snack. 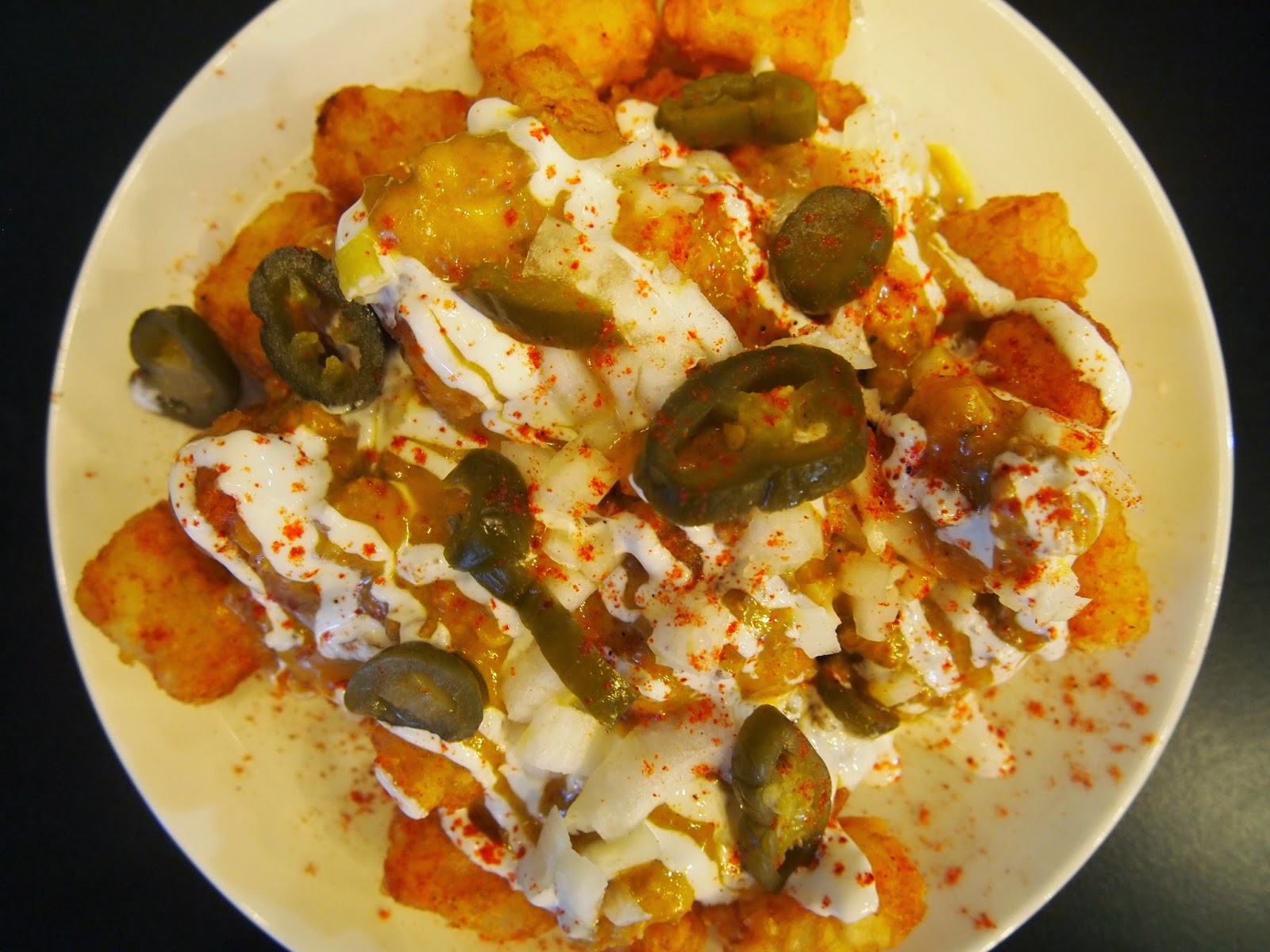 Our waitress, who was super friendly and attentive, told us to save room for dessert, and although I’m fairly sure we had no room left to save, we managed to scarf down two desserts. The first was the Fried Chocopie with Ice Cream (₩6,000). Chocopie is basically the Korean equivalent of the American Moon Pie, and is one of the most popular snacks in the country. As it turns out, the chocolate marshmallow pie is even better at Brew 3.15, deep fried and served hot, topped with a scoop of vanilla ice cream and chocolate drizzle. It was a bit oily, but had a great flavor and I’m confident these things would sell like hot cakes at a state fair. 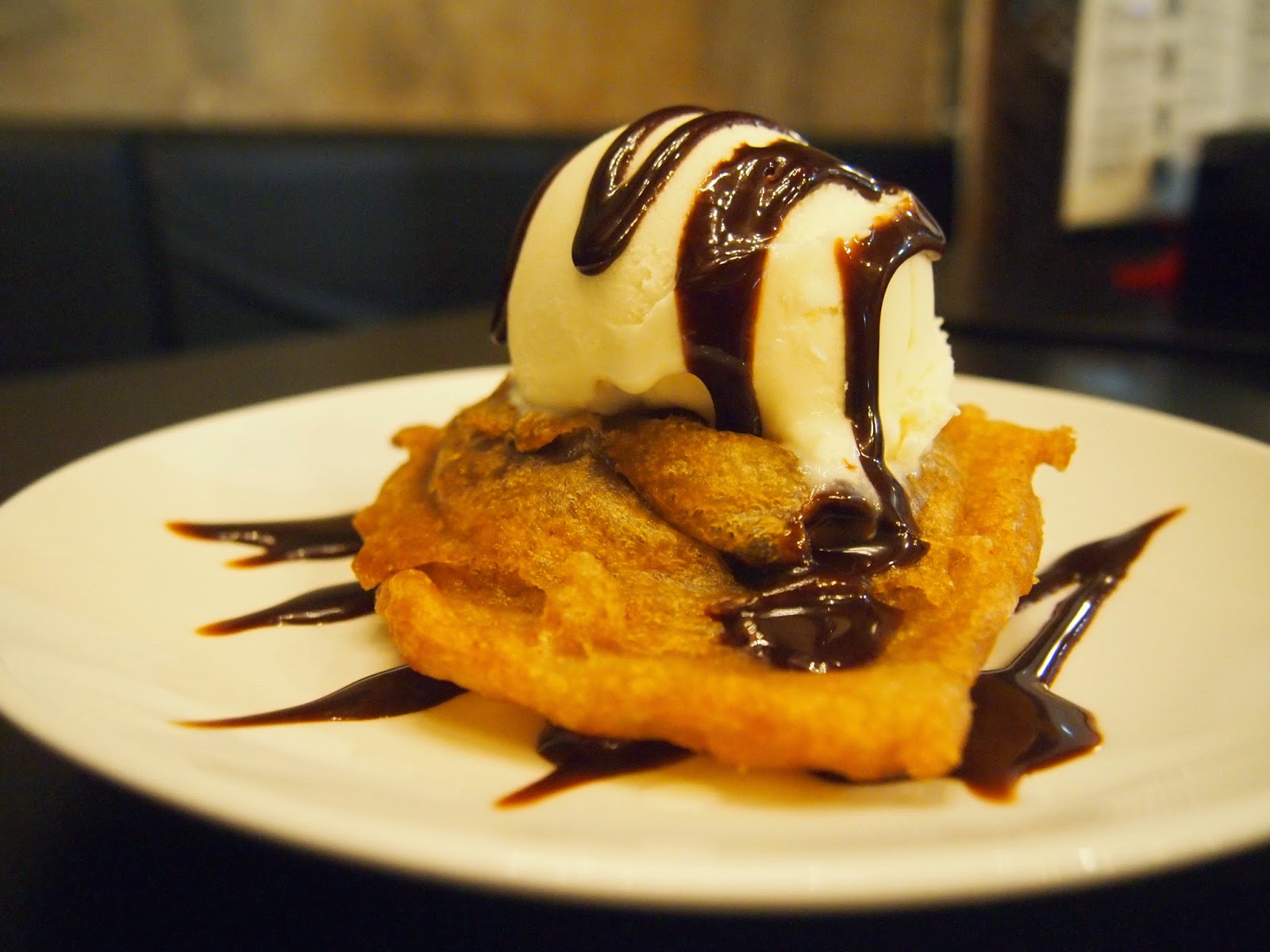 We were also lucky to try the dessert special, the New York Cheesecake (₩6,000), made personally by Daniel. Creamy, lemony and just the right level of sweet, we inhaled the perfect slice of cheesecake, topped with ripe red strawberries and a drizzle of honey. It had been a long time since I had cheesecake that had tasted that good and I hope Dan adds this item to the menu permanently. 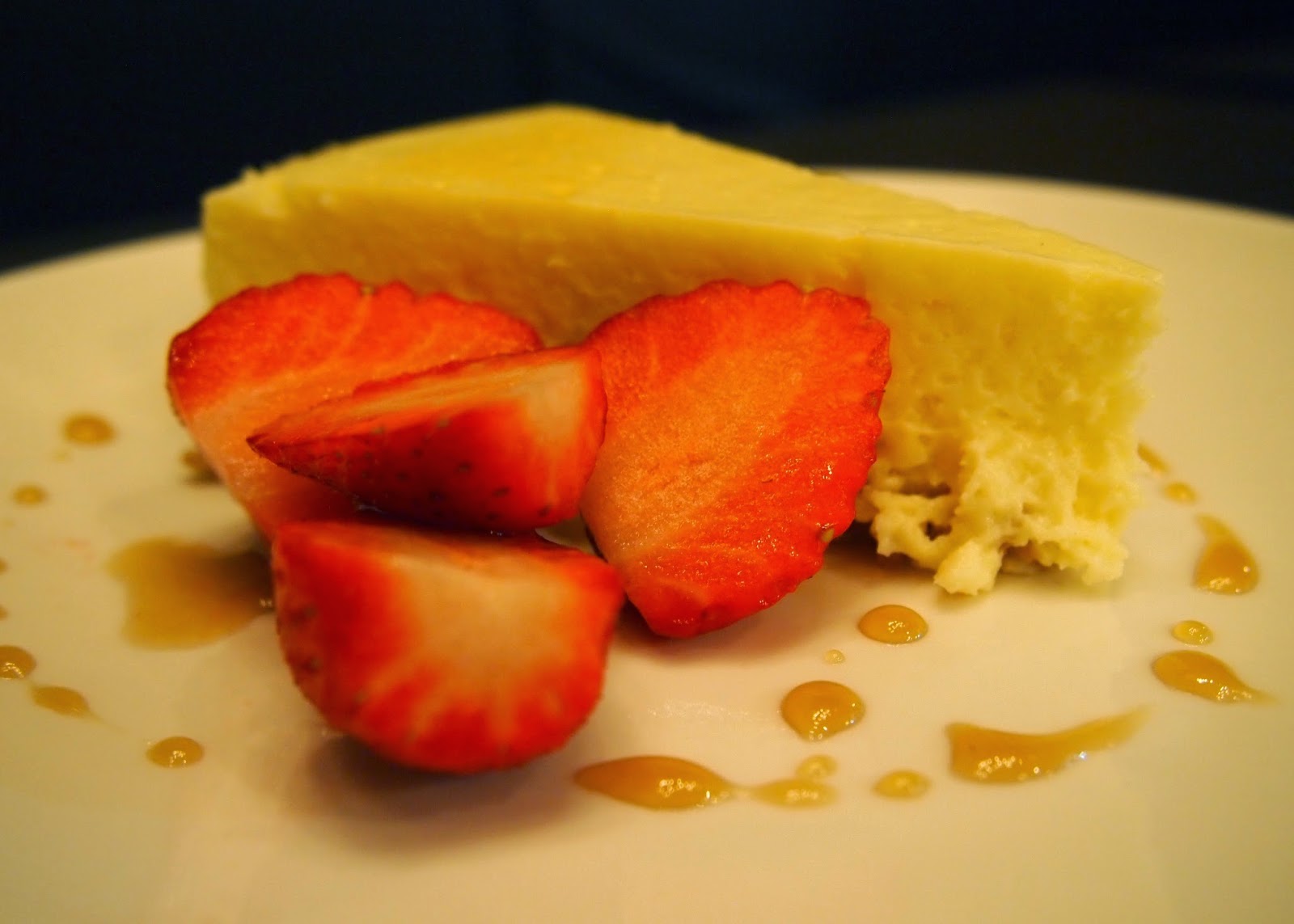 For those seeking a modern (and western) twist on chimaek, Brew 3.15 is the place to go. Also, it’s open until midnight, which makes it a great place to grab a few drinks in a neighborhood that generally closes down a bit earlier than other parts of the city.

Although this post was sponsored by Brew 3.15, the opinions are, of course, my own.